Against the ropes: Angela Merkel in trouble 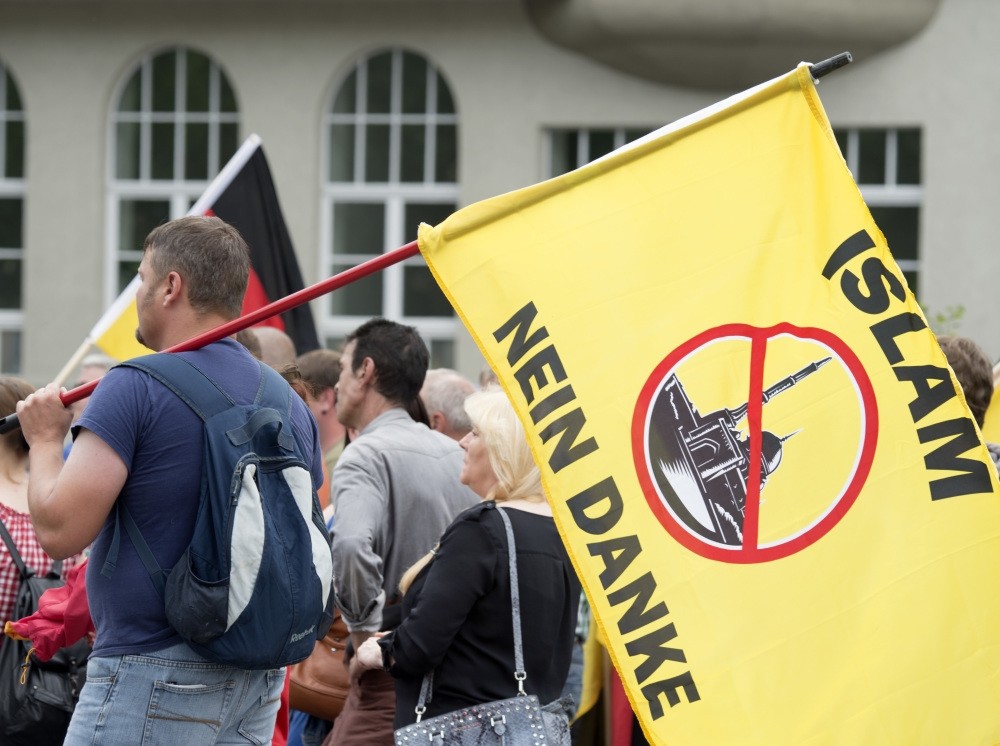 A supporter of the right-wing organization, Patriotic Europeans say No, PEsN, holding a flag reading ,Islam, no thanks, during a rally in Erfurt, central Germany, June 4, 2016.
by Burhanettin Duran Jun 06, 2016 12:00 am

Merkel's gamble on the Turkey-EU deal resulted in Germany's diplomatic deadlock. From now on she will have to work hard to avoid losing Turkey's friendship

President Recep Tayyip Erdoğan on Thursday received some troubling news during an official visit to Kenya. German parliament had joined a number of European countries to pass a resolution recognizing the forced relocation of Ottoman Armenians during World War I as genocide. The efforts of France and Germany, the European Union's de facto leaders, to twist Turkey's arm by playing the genocide card raises questions about the future of Turkey's European integration. Germany's Armenian resolution puts additional strains on Ankara's already troubled relationship with Brussels. By calling the 1915 events genocide, German parliament clearly tried to force Turkey to play defense instead of telling Europe how to address pressing problems.

To be clear, the argument that German Chancellor Angela Merkel, who did little to stop the motion, could not have possibly controlled the legislative assembly is unconvincing. And the actual problem is that Merkel surrendered to special interest groups trying to capitalize on Europe's anti-Turkey and anti-Erdoğan turn in an effort to break her isolation in German politics.

In recent months, Merkel's bold actions to address the refugee crisis have placed her political career at risk. Her domestic opponents have been telling voters that the German chancellor bowed before the Turkish president, who has been the target of hate speech in the media, to keep the Turkey-EU deal intact.

Merkel may have thought that the controversial resolution could give her some breathing room at home. As a matter of fact, she may have actively cleared its path to distract attention from the unpopular visa-liberalization agreement. Either way, the gamble might backfire and Merkel, who used a lot of political capital to sell the Turkey-EU deal, could end up with a deadlock over refugees and visa-free travel as well as a still-frustrated domestic opposition.

Reflecting on German parliament's decision, Erdoğan told reporters that Berlin was "losing Turkey's friendship." It would appear that Merkel will have to work hard to manage the current crisis.

The Turkish Embassy in Somalia

On the final day of his three-country visit in East Africa, Erdoğan arrived in Mogadishu, Somalia to open the largest Turkish diplomatic mission in the world. In a country where most foreign diplomats are unwilling to leave the safety of the international airport, Turkey sent a strong message to the people of Somalia by building an embassy the size of a university campus.

In recent years, Somalia has been Turkey's gateway to Africa. Since 2011, the Turkish government and nongovernmental organizations have supported the country by building hospitals, improving infrastructure, managing the airport, training the military and strengthening civil society.

Although Turkey has actively contributed to humanitarian relief operations and political transition in Somalia, the country still has to overcome major obstacles, such as the threat of al-Shabaab terrorism, before attaining political stability. The fact that 15 people, including two parliamentarians, were killed in an explosion just two days before Erdoğan's arrival indicates that Somalia needs a little more time.

Today, the country's political landscape is a battleground between rival tribes. Elections, which will be held over the summer, present an opportunity to kick start Somalia's political transition as a first step toward building an inclusive national identity and state capacity. Let us hope that the good people of Somalia will prevail over terrorism, extreme poverty and internal strife.