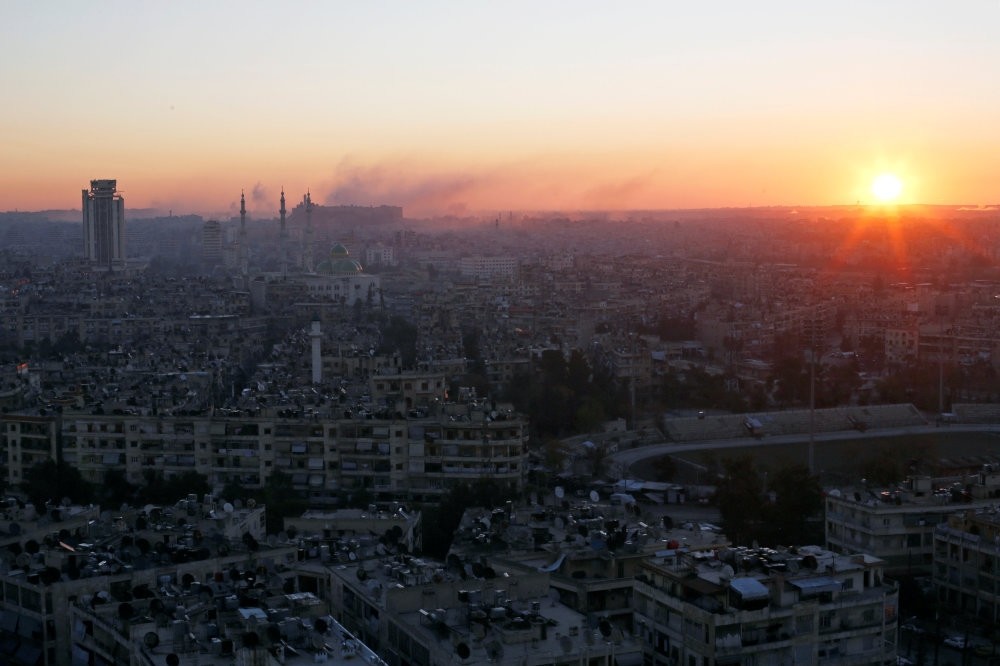 The sun rising with smoke billowing in the air near Aleppo's historic citadel, as seen from a regime-controlled area of Aleppo, Syria, Dec. 6, 2016.
by Burhanettin Duran Dec 08, 2016 12:00 am

As U.S. President-elect Donald Trump chooses his Cabinet, Russian Air Forces have resumed the heavy bombardment of Aleppo where thousands of civilians have lost their lives. In many ways, eastern Aleppo today resembles the situation in Grozny circa 2000 - the price of U.S. President Barack Obama's failed Syria policy that allowed Russia to pull the strings in the war-torn country.

For some time, the United States has not only failed to support the moderate rebels in Syria, but it effectively prevented the Gulf countries from helping them. As of today, it remains unclear what the Trump administration, which largely consists of former soldiers, intends to do about Syria. According to experts and analysts, there are two options on the table: The next U.S. president could treat all rebels as "Islamic extremists" and reach out to Bashar Assad's regime. Alternatively, he might conclude that the Russians have too much pull over Syria and take steps to balance the scales in Washington's favor. By the time we find out where the incoming administration stands on Syria, the people of Aleppo could be annihilated.Having been largely abandoned by the United States, the moderate rebels have turned to Turkey to facilitate negotiations with the Russians.

Although the secret talks are intended to end the siege, the Russian bombardment and the rapid advance of regime forces in eastern Aleppo indicate that the rebels are losing control over the area. Meanwhile, the Russians are telling the rebels what they told the Turks in the past: Unless you evacuate Aleppo and leave for Idlib, the massacre will continue. Needless to say, the U.N. Security Council is unable to do much more than beg Moscow not to turn eastern Aleppo into the world's largest cemetery. Meanwhile, the Turks are working hard to stop the bloodshed in Aleppo. In a series of phone calls with his Russian counterpart, President Recep Tayyip Erdoğan emphasized the need to find a solution before the humanitarian crisis deepens.

While Russian-backed regime forces try to take Aleppo, Turkey's proposed safe zone in northern Syria and advance toward the Daesh-held town of al-Bab has come to fuel tensions with third parties. To be clear, neither Russia nor the Americans want the Free Syrian Army (FSA) to liberate the town. At the same time, it remains unclear what steps will be taken against the People's Protection Units (YPG) and PKK militants in northern Syria. Although the Turkish National Security Council worked on a plan to force the YPG-PKK out of Afrin, Manbij and Sinjar at a recent meeting, the Turks would still have to convince Moscow and Washington before taking concrete steps. After all, even the Russians are uncomfortable with the idea of Turkey striking YPG targets in Afrin. At the same time, the Obama administration is unwilling to keep their promises and force YPG forces out of Manbij.

At this point, it's safe to say that the Assad regime is getting stronger on the ground, and they want the fall of Aleppo to mark a turning point in the civil war.

If Aleppo falls, Damascus will have regained control over all of Syria's major cities after years of fighting. Even though the rebels would continue fighting the regime in places like Idlib and the outskirts of Hama and Homs, their position in the peace talks will be clearly weakened. With the moderate rebels out of the picture, Damascus will finally turn against the YPG forces in an effort to end the civil war.

Even if Aleppo falls, the rebel groups that have been fighting the Assad regime are unlikely to lay down their arms and surrender. The most likely scenario is that tens of thousands of fighters will adopt guerilla tactics to prevent the regime from regaining control over Syria, which has the obvious advantage of rendering regime airstrikes ineffective. The downside is that the Syrian civil war might just get bloodier.