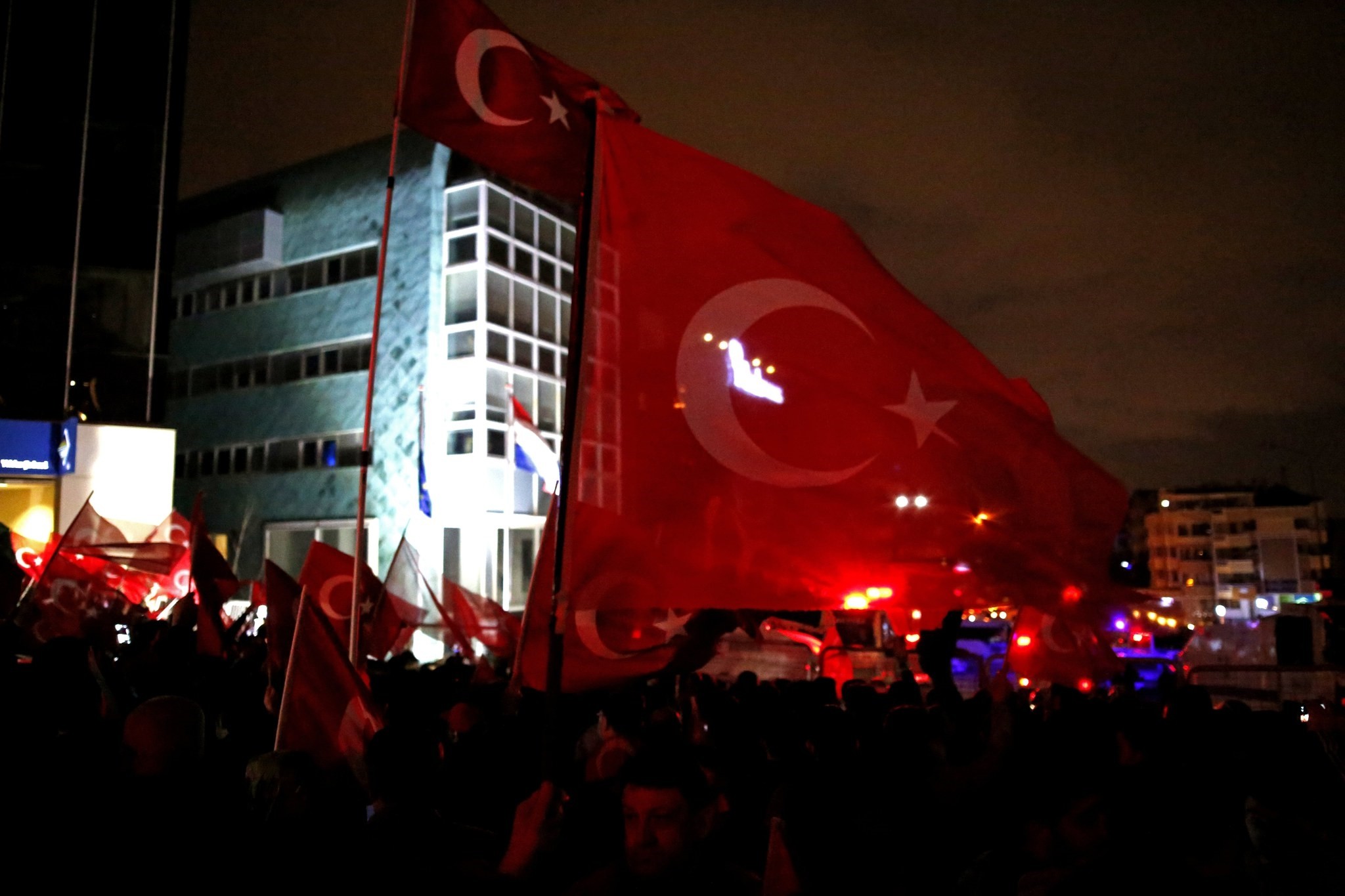 People shouting slogans in front of the Netherlands Embassy in Ankara against the Dutch government's treatment of Turkish Family and Social Policy Minister Fatma Betu00fcl Sayan Kaya, March 12.
by Burhanettin Duran Mar 21, 2017 12:00 am

If the West wants to do business with the Turks, it must acknowledge that what Mr. Erdoğan represents will be part and parcel of Turkey's future

With the April 16 constitutional referendum around the corner, not a day goes by without another Western media outlet claiming that Turkey will "move closer to dictatorship" if the "yes" campaign wins. The same talking points that anti-Turkey lobbyists had been using for years are being recited by academics and theorists. And newspapers are full of commentaries calling on NATO and the European Union to part ways with President Recep Tayyip Erdoğan's Turkey – which legitimize the Dutch government's scandalous break with diplomatic convention and promote the idea of punishing the Turks. Although Westerners like to play with the orientalist idea of an "untamable Middle Eastern leader," there should be no doubt that the Turkish people will refuse to bow down.

The situation is crystal clear: The same people who praised the "AK Party [Justice and Development Party] model" to the Muslim world – because they saw it as a useful player in the region - have been frustrated with the movement's commitment to national interests and has tried to "reclaim" Turkey. But the failure of the Gezi Park protests, the December 2013 judicial coup and the July 15 coup attempt to remove Mr. Erdoğan from power caused them to adopt punitive measures. At the same time, the vast majority of Western politicians conveniently opted to ignore a series of events that effectively redefined Turkey's national identity. Instead, they desperately kept looking for ways to control – or, better yet, get rid of – the Turkish president.

In truth, the West's priority should have been to understand how the Turkish people's self-perception was changing and to take measures necessary to address the geopolitical challenges ahead. As such, it would be smarter for Western policymakers to start thinking how they can work with Turkey – and abandon the futile hope of Mr. Erdoğan's impending fall.

If the West wants to do business with the Turks, it must acknowledge that the things Mr. Erdoğan represents will be part and parcel of Turkey's future. They must come to terms with the fact that the country is in the process of redefining its identity and soul – which the president identified as "domestic, national and democratic" in a recent speech.

In case what Mr. Erdoğan meant by the three terms is unclear, here are some things that fall within that category: The Turkish people's resistance to the July 15 coup attempt and commitment to control their future. The efforts of everyone who doesn't want their country to turn into Syria as a result of foreign operations. The frustration of ordinary Turks who are sick and tired of the hypocrisy and arrogance of Turkey's Western "allies" who have collaborating with the PKK and Gülenist Terror Group (FETÖ). This sense of solidarity made it possible for the Turks to host 3 million refugees for years while fascism took Europe by storm because 1 million people made it there.

To be clear, not everyone in the West is blinded by anti-Turkey rhetoric. Some people indeed understand that losing Ankara's friendship will destabilize Europe and facilitate Russian hegemony. Ironically, most of the sensible proposals come from retired politicians. Earlier this month, the former European Commissioner for Enlargement Günther Verheugen urged both sides to make a fresh start: "We must not forget that geography, history and the global situation push us closer. The European Union must unconditionally guarantee that Turkey will be permanently part of the European family with equal rights. Turkey, in turn, must reassure [Europe] that it will address major domestic problems within the limits of democracy and the rule of law. The main question is how we can build our joint future as equals."

Although Mr. Verheugen's approach would be compatible with the idea of doing business with Turkey, it would appear that hardly any European leaders are willing to endorse his view. Before things start moving in the right direction, France and Germany will have to hold their elections and the new balance of power between Europe, Russia and the United States must become clear. Only then can the European Union actually think about a reset with the Turks.