Erdoğan in India: 'The world is bigger than five' 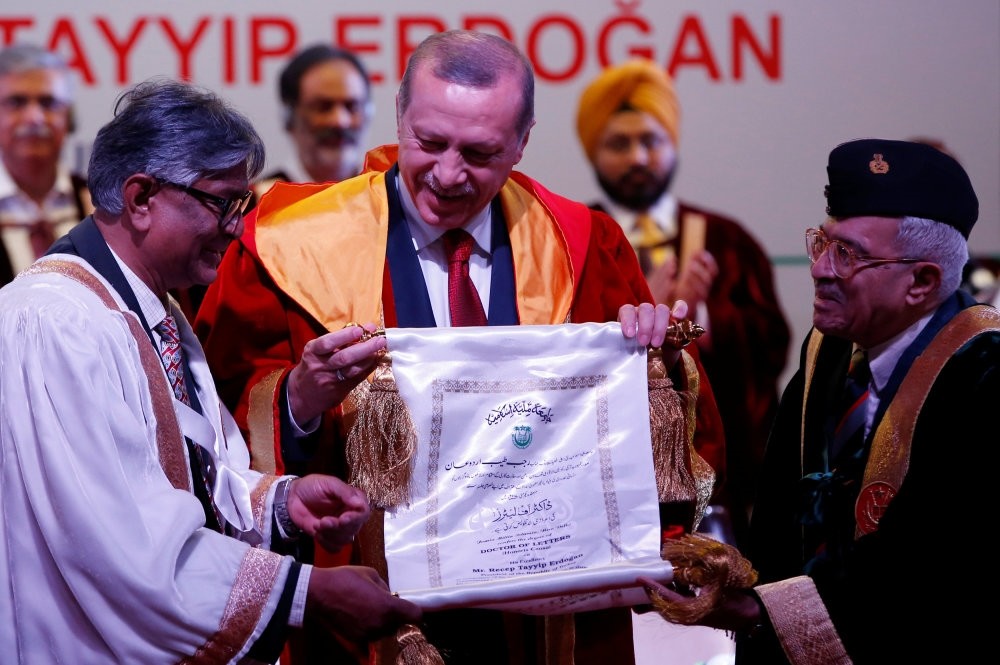 President Recep Tayyip Erdou011fan (C) receiving an honorary Doctor of Letters degree from M. A. Zaki (R), Chancellor of Jamia Millia Islamia University, during a convocation in New Delhi, India on Monday.
by Burhanettin Duran May 03, 2017 12:00 am

Erdoğan's message in India was clear, again repeating his reformist motto 'the world is bigger than five', urging Indian officials to stand against the imperial world order

On Monday, President Recep Tayyip Erdoğan kicked off a busy month in New Delhi, India. Over the next few weeks, he will meet the leaders of Russia, Kuwait, China, the United States and NATO as part of a new economic and foreign policy offensive.

Having won another victory in last month's constitutional referendum, the Turkish president wants to use political stability to spur economic growth. He also wants to overcome the sticking points in foreign policy by engaging in a new round of negotiations. In conjunction with his new priorities, Mr. Erdoğan could adopt a new agenda at home. His return to the Justice and Development Party (AK Party) could mark the beginning of a new era, in which the ruling party's platform and leadership could be updated after 15 years in power and ahead of the 2019 presidential election.

With the hard-fought referendum campaign behind us, foreign officials seem intent on reducing tensions with Turkey. Recent calls by NATO Secretary General Jens Stoltenberg and EU Foreign Policy Chief Federica Mogherini urging everyone to respect the referendum results and sympathize with Turkey's national security concerns could be seen as a sign of renewed interest in the country. To be clear, this is a good time for the Turks to reflect on their 54-year-old EU membership bid. Before any concrete steps are taken, however, Brussels could revisit its stance on Turkey's war on terror to ease tensions. Meanwhile, the Turkish president's upcoming meeting with U.S. President Donald Trump will focus on the war on Daesh in Syria, the future of the People's Protection Units (YPG) and efforts to contain Iran. The two leaders will discuss at length operational details that Turkish and U.S. officials had been negotiating for some time.

It should be clear to everyone that the post-World War II order fails to address the pressing problems in the world. And as Washington flirts with the idea of economic isolationism, emerging economies are looking for alternative methods to maintain robust growth including revitalizing bilateral relations and using their national currencies in international deals.

Turkey and India are among the developing countries trying to change their role in the international system. Noting that the U.N. Security Council remains ineffective and unjust, both nations often call for reform. India, which is home to 1.3 billion people and currently the world's seventh largest economy, wants to be more influential in the international arena. Meanwhile, the Turks want to become one of the world's top 10 economies.

Speaking at the Jamia Millia Islamia, an Indian university, which conferred an honorary doctorate on the Turkish president, Mr. Erdoğan talked about the history of his country's historical ties to India and recalled the Indian people's support to the Turkish War of Independence. Noting that changing circumstances around the world pushed the two countries closer, the president said he hoped that his visit would mark a turning point in bilateral relations. He criticized the world order for being unfair and repeated that the world was "bigger than five."

Turkey and India both supported a reform of the United Nations system, he posited. While stressing that the U.N. Security Council failed to represent countries like India and Japan, along with the 1.7 billion Muslims around the world, Mr. Erdoğan noted that it was important for him to be appreciated by oppressed peoples around the world. He not only noted that Western nations exploited democracy and human rights for their own gain but also urged the Indian leadership to work with Turkey for "a fair and sustainable world" on the basis of mutual benefit.

It is safe to say that the demand for global justice has become a core component of the Turkish president's political platform.

Burhanettin Duran is General Coordinator of SETA Foundation and a professor at Ibn Haldun University. He is also a member of Turkish Presidency Security and Foreign Policies Council.
Last Update: May 03, 2017 1:25 am
RELATED TOPICS