The KRG referendum and the future of the region 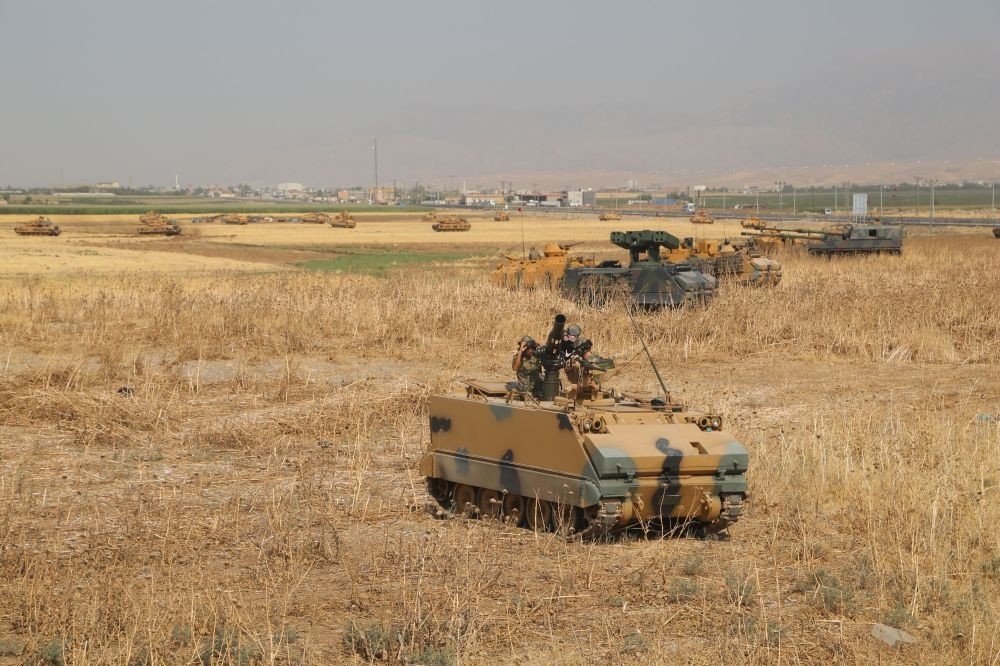 Turkish armored vehicles near the Habur crossing gate between Turkey and Iraq during a military drill on Sept. 18.
by Burhanettin Duran Sep 23, 2017 12:00 am

Kurdistan Regional Government (KRG) President Masoud Barzani insists on holding an independence referendum in northern Iraq. He repeatedly ignored warnings from Irbil's two principal allies – Turkey and the United States. Meanwhile, Baghdad doubled down by threatening military action against Irbil and called for the cancellation of the referendum instead of its postponement. At this point, threats from Iran and the Hashd al-Shaabi forces around Kirkuk are no longer ignorable. In light of yesterday's National Security Council (MGK) and Cabinet meetings, Turkey's position, too, became clearer.

Needless to say, there will be efforts until the last minute to secure an agreement for postponement between Baghdad and Irbil. Barzani, however, has no intention to cash in on the opportunities that the anti-Daesh fight's imminent end entails. At the very least, he would like to create a road map to independence that international players would be willing to accept.

By insisting on holding the independence referendum, the KRG president transformed his quest for an independent Kurdistan from an abstract idea or long-term goal to a concrete objective that he would like to accomplish over the next couple of years. He would like to put his name on the once-in-a-century opportunity. It would appear that he believes the Kurdish Spring to have reached its final stage and it is time to reap its benefits. Remember how experts started playing with the idea of a Kurdish Spring when it became clear that the Arab revolts brought with them winter as opposed to spring? The term was used to suggest that the revolts, began in late 2010, would serve the interests of Kurdish political players as opposed to Arabs. When former U.S. President Barack Obama left the Arab people to the mercy of the Gulf's counter-revolutionary goals, Gen. Abdel-Fattah el-Sissi carried out a coup in Egypt. At the same time, civil war broke out in Libya, Yemen and Syria. And the fire of Daesh that was lit in Mosul turned Iraq and Syria into hell for the following three years.

As the anti-Daesh struggle comes to an end, Barzani's insistence on holding an independence referendum marks the beginning of the new stage in Syria and Iraq, which relates to the post-Daesh future of both countries. To be clear, the future looks grim, since three critical developments came together to form a new region-wide black hole.

First of all, the great powers, including the United States, lack a common post-Daesh Syria policy. President Donald Trump's administration's intention to contain and isolate Iran has not become policy either. At the same time, the region could give rise to new problems such as the Qatar crisis. To make matters worse, the international community is not prepared to stop the conflicts that Barzani's push for independence could spark.

Secondly, regional powers do not want national borders to shift or their territorial integrity contested. Although they disagree on a range of other issues, they think along the same lines regarding this matter.

Finally, the Kurdish nationalists who believe that the time is right seem unable to keep their ambitions under control. Once the controversy surrounding Barzani is over, we will start talking about efforts by the PKK and YPG to form their own statelet.

From this perspective, it should be clear why Turkey has assumed a tough stance on Barzani's referendum. Are the supporters of the KRG president's push for independence, who claim that an independent Kurdistan would be closer to Turkey than Iran, aware that the region has entered a new period of conflict? Under the circumstances, is it realistic to think that the current players can peacefully go their own separate ways? How will the separation take place? According to which borders and based on what legal status to be given to the various ethnic groups? I am not sure if you are aware that the ambitions of Kurdish nationalists fuel the anger of Arab, Persian and Turkish nationalists. Let's make sure that what they think is some kind of spring is not actually a winter marred with more pain and blood.

Burhanettin Duran is General Coordinator of SETA Foundation and a professor at Ibn Haldun University. He is also a member of Turkish Presidency Security and Foreign Policies Council.
Last Update: Sep 23, 2017 1:55 am
RELATED TOPICS