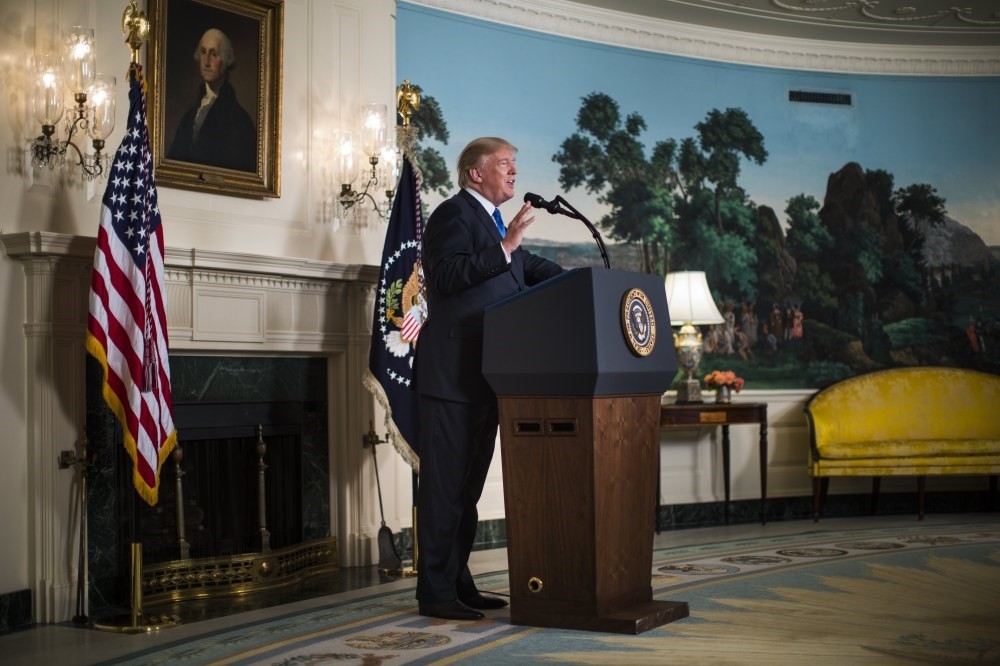 President Trump announces his decision on the Iran nuclear deal in the Diplomatic Room of the White House in Washington, Oct. 13.
by Burhanettin Duran Oct 17, 2017 12:00 am

Trump's new strategy on Iran and the nuclear deal is likely to also have a huge impact on U.S. allies in the region

Just as Turkey and the United States are trying to form a joint commission to address the visa crisis, a new challenge has started to emerge in bilateral relations: How will Iran be contained in the Middle East and where does Turkey stand on the issue. Last week, the Donald Trump administration unveiled its new Iran strategy. It has been no secret that U.S. President Donald Trump was itching to withdraw from the Iran nuclear deal. As a general rule, Mr. Trump has been known to favor bilateral agreements over multilateral deals.

In line with his position on the Trans-Pacific Partnership (TPP) and the Paris climate agreements, the U.S. president has been critical of the Iran nuclear deal. U.S. Secretary of Defense James Mattis and U.S. Secretary of State Rex Tillerson, by contrast, have reportedly been calling on Trump to certify the deal, since they maintained that the U.S.'s withdrawal would only expedite Iran's efforts to develop nuclear weapons.

Trump, who believes that the deal his predecessor made with the Iranians was "one of the most incompetently drawn deals I've ever seen," had two choices: He could have refused to certify the deal, sent it back to U.S. Congress and seen whether new sanctions would be brought against Tehran over the following 60 days or he could have certified the deal, while noting that it was necessary to re-negotiate it. If Trump were to refuse to certify the deal at a time when U.S. institutions noted that Iran was complying with the terms of agreement, he was going to risk opposition from Europe, Russia and China.

Now let's focus on the other elements of the Trump administration's Iran strategy that were leaked to the press.

Trump, media reports suggest, wants to concentrate on restoring a more stable balance of power in the region and revive Washington's traditional alliances and regional partnerships to prevent Iranian destructiveness. Trump's administration claimed that the Obama administration had mistakenly withdrawn from the region, providing Iran with a power vacuum to exploit, which made it possible for Tehran to increase its activities such as developing ballistic missiles, hostility towards Israel, terrorism financing, supporting the Assad regime, interrupting naval traffic in the Persian Gulf, carrying out cyberattacks against the United States, Israel and other U.S. allies in the Middle East, human rights violations and the arbitrary detention of foreigners, including U.S. citizens.

The United States had neglected the long-term, Iranian-backed militarization in the Middle East over the past 15 years, the leaked documents read, while focusing on the short-term threat of Sunni extremism. As such, Trump's primary goal seems to be the containment of the Revolutionary Guards that participate in violent conflicts in Syria, Iraq and Yemen and threaten Saudi Arabia and the United Arab Emirates.

My sense is that Trump's implementation of the new Iran strategy will come with a heavy price tag to U.S. allies in the Middle East. For Israel, Saudi Arabia and other Gulf countries, which support the administration's plans to contain Iran, this is about state capacity. After all, Washington's allies in the region will have to shoulder the burden if and when Trump fails to mobilize international support for his road map. Needless to say, Turkey's take on the issue will be of critical importance.

It remains unclear how Turkey, which recently struck a series of deal with regional powers and has been looking for Iranian cooperation in Syria and Iraq, will respond to Washington's call to join its mission without asking questions. Let us recall that President Obama prioritized the fight against Daesh to ignore the problem of the People's Protection Units (YPG) militancy. So if President Trump now tells Turks that Iran is the priority and turns a blind eye to the YPG, that policy could further strain Turkey-U.S. relations.

Asking for a lot of things without offering anything in return has been a serious problem in U.S. policy. Under the circumstances, one cannot help but wonder whether the visa crisis and the decision to schedule a hearing in the Zarrab case in November were intended to mount pressure on Turkey to get Turks on board the new Iran strategy. Could the U.S. media's accusations against Turkey – that the country's alliance with Washington is being questioned and Turkey is being likened to Iran – be a prelude to greater pressure?