Erdoğan calls for braver unity against injustice at OIC summit 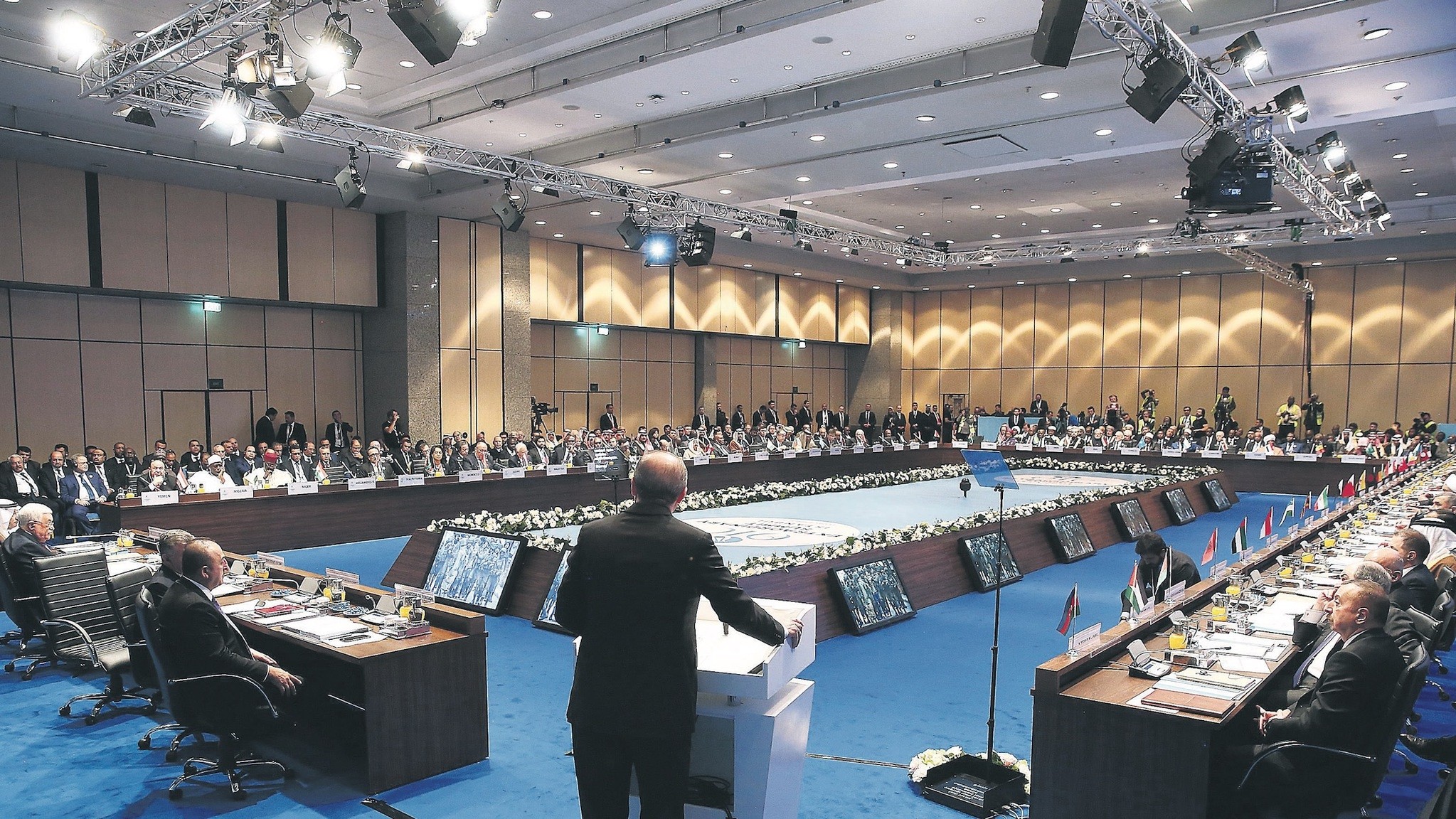 President Erdou011fan delivers the opening speech during an Extraordinary Summit of the Organisation of Islamic Cooperation (OIC) on Trump's recognition of Jerusalem as Israel's capital, Istanbul, Dec. 13.
by Burhanettin Duran
Dec 14, 2017 12:00 am

The Organization of Islamic Cooperation (OIC) yesterday held an emergency summit in Istanbul at the request of President Recep Tayyip Erdoğan to discuss the "transgression against Jerusalem's historical status" by U.S. President Donald Trump. Delivering the opening address, Erdoğan called on Muslim countries to recognize Jerusalem as the capital of the currently occupied State of Palestine. Having discussed Mr. Trump's Jerusalem move with a number of world leaders, including French President Emmanuel Macron, Russian President Vladimir Putin and the Pope, the Turkish leaders referred to Israel as "a state of terror and occupation" and argued that Mr. Trump had rewarded the Israelis with his unilateral decision.

The United States, Mr. Erdoğan added, had exploited its might to reach an unjust decision:

"The world doesn't just consist of [the United States]. The United Nations has 196 member states. You - the United States - may be a powerful country. You may have guns. America may have 16 nuclear warheads. You may have plenty of warplanes. But that doesn't mean that you are strong. If you are right, you will be strong. If you are not, you must know that you will never be strong. Having stood in solidarity with those who render peace elusive rather than those who want peace, the United States served the interests of all fanatics at a time when an intense war on terror is underway."

He added that Washington provided support to terrorist organizations, such as the PKK-affiliated People's Protection Units (YPG), and urged Muslim countries, along with European powers, to recognize the State of Palestine. It was noteworthy that Saudi Arabia was represented by a deputy minister at this historic summit of the OIC, which was established under the leadership of Saudi Arabia following an attack on Al-Aqsa Mosque in 1969. The OIC's headquarters are still in Jeddah. Although Saudi's King Salman bin Abdulaziz did not participate in the summit, he was forced to convene the Shura Council to publicly request that President Trump retract his decision.

Many observers, however, accused Saudi Arabia - which imposed a media ban on Mr. Trump's Jerusalem move and sent a low-level representative to the OIC summit - of being insincere in its condemnation of the Trump administration. As a matter of fact, Saudi Arabia's reaction was largely considered proof of how deep the country's crisis of regional legitimacy went.

At the same time, Riyadh effectively lost the Muslim world's leadership on Jerusalem to Turkey. After all, it was President Erdoğan who openly criticized the Trump administration and Israel, and hosted the OIC summit.

A recent study by the Pew Research Center revealed that people across the region considered the Turkish president an exceptional figure. "Publics in the Middle East tend to see Turkish President Recep Tayyip Erdoğan more positively than other Middle Eastern leaders," the center maintained. That outcome was not a coincidence. After all, the Turkish president is the only Muslim leader who can raise awareness about the problems of Muslims without engaging in essentialist anti-Westernism. Throughout the Jerusalem crisis, he publicly criticized the U.S. for taking an illegitimate step and called on everyone, including Christians and Jews, to join him.

Needless to say, Mr. Erdoğan's criticism of Washington's Jerusalem move and his decision to host the OIC summit did not make the U.S. happy. On Tuesday, U.S. National Security Advisor Gen. H.R. McMaster alleged that Turkey and Qatar were the "new sponsors of radical Islamist ideology." Interestingly enough, Mr. McMaster whitewashed Saudi Arabia by saying the country had supported "some of these organizations" decades ago. To add insult to injury, he associated Turkey's Justice and Development Party (AK Party) with "the Muslim Brotherhood model" and blamed "Turkey's drift from the West" on the movement - which shows just how dangerous the Trump administration's future direction could be. At the same time, Mr. McMaster's comments were notably reminiscent of recent statements made by Saudi Crown Prince Mohammed bin Salman on "moderate Islam." It would appear that President Trump will not just identify Iran as a rogue state in his new national security strategy. Instead, he is likely to identify Turkey and Qatar as new threats.

The most recent developments represent a new stage in the Trump administration's negative effects in the Middle East. To be clear, it all started in May 2017, when the U.S. president traveled to Saudi Arabia and attended the Riyadh Summit. There, he spoke with Arab leaders about his plans to form an anti-Iran bloc and to fight radicalism. His next stop on the same trip was Israel, where he held talks about the third part of his regional strategy.

As such, it is possible to identify three distinct dimensions of the Trump administration's Middle East strategy:

1- Mr. Trump wants to form a united Arab front against Iran. He already unveiled his administration's strategy to contain the country.

2- He will try to discipline countries like Qatar and Turkey, which resist his plans, by accusing them of sponsoring radicalism. Qatar has been targeted by a blockade. It remains to be seen how Turkey will be targeted.

3- Under the pretext of supporting the Middle East peace process, Mr. Trump wants to preserve and further Israeli interests. He already recognized Jerusalem as the capital of Israel - which spurred violence in Palestine. It should become clear soon what kind of terms Washington will impose for the sake of "peace."

The fourth and final dimension is possibly related to the growing Russian influence in the Middle East.

U.S. President Donald Trump's new national security strategy will result in a new wave of turbulence in the Middle East. As such, both the regional balance of power and threat perceptions of individual nations should be expected to change.