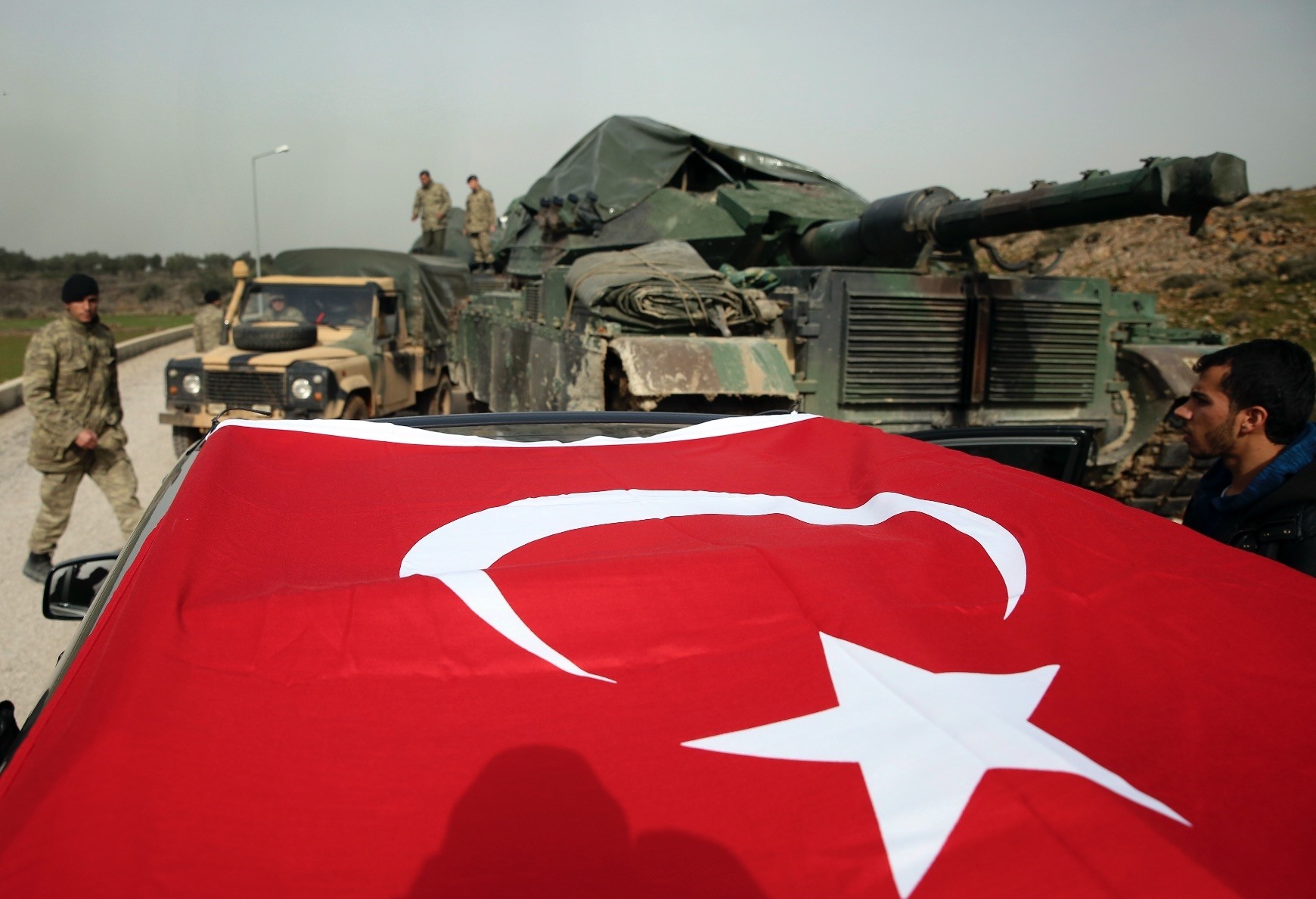 Turkish soldiers prepare tanks and armored personnel carriers at a staging on the Turkish-Syria border, Jan. 22.
by Burhanettin Duran Feb 05, 2018 12:00 am

As Operation Olive Branch continues with full force, there are efforts to bring Turkey's fight against the PKK-affiliate People's Protection Units (YPG) to an end. Western governments note that they appreciate Ankara's security concerns. Yet they clearly don't want the Turks to control Afrin or the rest of the YPG-controlled "cantons" in northern Syria. Complaints by CENTCOM officials about the operation's supposedly negative effects on the fight against Daesh and their commitment to continue supporting YPG militants attest to that fact.

The most recent addition to the choir of naysayers was French President Emmanuel Macron, who warned that Operation Olive Branch could be a problem for Paris if it evolved from a counterterrorism operation into an occupation. Again, Western media outlets continue to describe Turkey's incursion as a "war on Syrian Kurds" and complain that the Kurds, who defeated Daesh, have been abandoned. Although the Turkish government repeatedly stated that the operation targeted the PKK/YPG, which forcibly removed a massive number of Kurds from northern Syria, as opposed to the Kurdish community itself, critics have been trying to launch an emotional campaign citing alleged civilian casualties. To nobody's surprise, tens of missiles fired by YPG militants against Hatay and Kilis have been largely ignored.

To be clear, the West's refusal to view the YPG as a terrorist organization and the Western media's romanticization of "the Kurds" reflect an eagerness to stop Turkey's fight against the PKK/YPG. As a matter of fact, they would like the Turkish government to negotiate with those organizations - recalling that Turkey hosted the Democratic Union Party (PYD)/YPG leaders and engaged in disarmament talks with the PKK just a few years ago. In other words, President Recep Tayyip Erdoğan's past efforts to disarm the PKK are being repurposed as an obstacle before Turkey's fight against the same group. Needless to mention, the domestic opponents of "the war" and a smear campaign against the Free Syrian Army (FSA) serve the same purpose.Again the backdrop of those developments, The New York Times recently urged the U.S. and NATO to force President Erdoğan to relaunch the peace process. They ought to tell the Turks, the paper's editors argued, that a semi-autonomous region under YPG control would pose no threat to Turkey. They added that the "Syrian Kurds" needed to ensure Ankara that they would not cooperate with PKK militants in Turkey and to accept that their autonomous region in northern Syria would never become independent.

Here's the contradiction with The New York Times' view: Turkey has been making the case that the PKK in Turkey and Iraq were one and the same as YPG in Syria - which the U.S. rejected. Operation Olive Branch established beyond a doubt that the PKK was indeed a terrorist organization with a Syrian presence. Now, the American government would like to approach Turkey with a new proposal, under which the PKK would withdraw from Turkey and, in return, get to control a semi-autonomous region in northern Syria - under the protection of NATO.

This proposal is irrational for three reasons and would only serve to stop Turkey's fight against the PKK/YPG as opposed to peace.

First, it fails to take into consideration that the PKK walked out of disarmament talks twice, despite efforts by President Erdoğan, in an effort to keep its "cantons" in Syria. Against the backdrop of negotiations with Turkey, the organization strengthens the PYD/YPG in Syria and laid the groundwork for what came to be known as the "trench war" in southeastern Turkey. As such, there is no reason to believe that the PKK would give up its claims in Turkey in return for the "cantons" in Syria. It would only use this trade to win some time and gain legitimacy.

Secondly, it is important to note that PKK/YPG militants, who have evolved into a regular army thanks to U.S. support in recent years, are more ambitious than ever. To make matters worse, the situation in the Middle East today gives the group no reason to backtrack on its separatist goals. Needless to say, the regional policies of the U.S. and NATO raise concerns in Turkey instead of addressing them.

Finally, the cases of Catalonia and northern Iraq established that autonomy does not cure separatist nationalism. It merely makes it stronger. Under the circumstances, proposing a new round of negotiations would serve no purpose other than selling the Turks on the PKK/YPG presence in northern Syria and eroding domestic support for the counterterrorism agenda. Luckily, the Turkish people have enough experience not to buy into such schemes.

Burhanettin Duran is General Coordinator of SETA Foundation and a professor at Social Sciences University of Ankara. He is also a member of Turkish Presidency Security and Foreign Policies Council.
Last Update: Feb 05, 2018 1:33 am
RELATED TOPICS