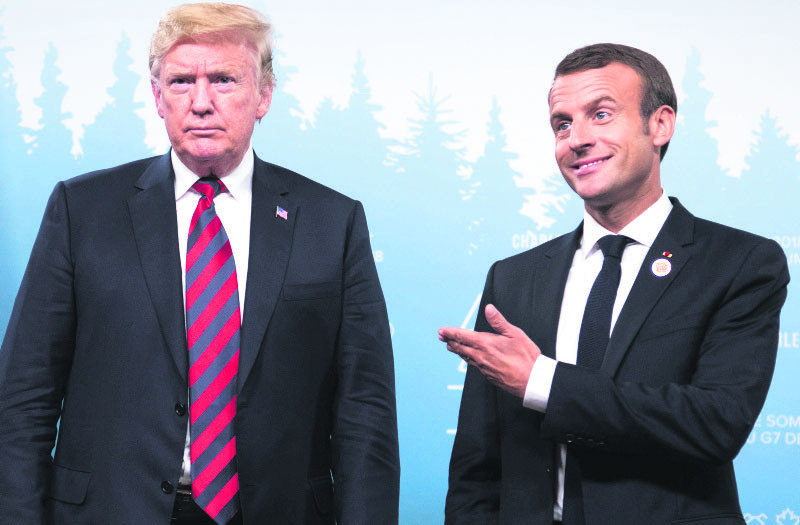 U.S. President Donald Trump and French President Emmanuel Macron hold a meeting on the sidelines of the G-7 Summit in Charlevoix, Quebec, Canada, June 8.
by Burhanettin Duran Jun 14, 2018 12:00 am

The Turkish people will choose a leader who will skillfully manage the country in a rapidly changing and unpredictable global system, in which even historical allies are turning against one another

Tensions are growing between the United States and Europe. U.S. President Donald Trump's blatant disregard for international norms and commitment to protectionism and unilateralism continue to frustrate Washington's allies. At this point, tensions within the Western alliance are slowly evolving into a structural problem.

Of course, Mr. Trump is always at the heart of these controversies. His criticism of NATO and the European Union, his decisions to withdraw from the Paris Climate Accord and the Trans-Pacific Partnership trade deal, to slap China, Canada and Europe with steel and aluminum tariffs and to relocate the U.S. Embassy in Israel to Jerusalem, immediately come to mind.

This week's G-7 summit, which was held in Canada, was perhaps the straw that broke the camel's back. The U.S. president called for the readmission of Russia, whose membership was suspended in the wake of Moscow's invasion and annexation of the Crimean peninsula in 2014, he refused to sign the final communique and left the summit early. To make matters worse, he accused Canadian Prime Minister Justin Trudeau of being "weak."

Some commentators argue that a "trade war" just broke out within the Western alliance. The most memorable picture from the G-7 summit in Canada features an angry Angela Merkel, who appears to be asking Mr. Trump for an explanation. The U.S. president, arms crossed on his chest, seemed uninterested in the opinions of Mrs. Merkel and the rest of the European leaders.

To be clear, French President Emmanuel Macron's remarks on Thursday hinted that the G-7 summit wasn't going to be a walk in the park. "The American president may not mind being isolated," tweeted the French leader, "but neither do we signing a 6 country agreement if need be." Mr. Macron's extraordinary attack on the U.S. president suggested that he had failed to remind Mr. Trump of their "shared values" and attested to Europe's commitment to resist Washington.

It is important to recall that a similar statement was recently made by Donald Tusk, the president of the European Council, who argued that the U.S. president posed an "existential threat" against the European Union. "What worries me most is the fact that the rules-based international order is being challenged," he complained. What is surprising, Mr. Tusk said, "is that the challenge is driven not by the usual suspects, but by its main architect and guarantor, the U.S." He added that Washington's actions played into the hands of those who seek a "post-West order."In other words, European governments are unhappy with the Trump administration's apparent commitment to undermine the post-World War II economic order that Washington itself created. Mr. Trump, in turn, claims that the global order hurts American interests. Most recently, he said that the U.S. was a "piggy bank that everybody's robbing." Whether the U.S. president's eagerness to neglect his global responsibilities and impose new bilateral deals on his counterparts helps the U.S. economy is unclear, but it unmistakably hurts the international order. As such, the Western alliance is experiencing some changes in its relations with Russia and China – as well as itself.

Turkey is heading for a historic election against the backdrop of such extraordinary uncertainty. As the G-7 summit clearly established, the global community is entering a period of unpredictability. Turkey, which has been dealing with the negative side effects of violent conflicts in neighboring Syria and Iraq, must now respond to global challenges as well.

Having experienced problems with the United States and the European Union over their national security concerns, the Turks will now find themselves amidst fierce competition and a potential trade war between leading global powers.

Under the circumstances, the country needs a strong government that can push back against – as well as take advantage of – regional and global uncertainty. On June 24, the Turkish people won't just vote for the candidate who is most likely to keep his/her promises after the election. At the same time, Turkey will pick a leader who can strengthen the presidential system's institutions and manage the coming turbulence.

Needless to say, the opposition candidates have nothing on President Recep Tayyip Erdoğan when it comes to shouldering this burden. Having been in power for 16 consecutive years, he knows world leaders and understands the shifting balance of power in the international arena.