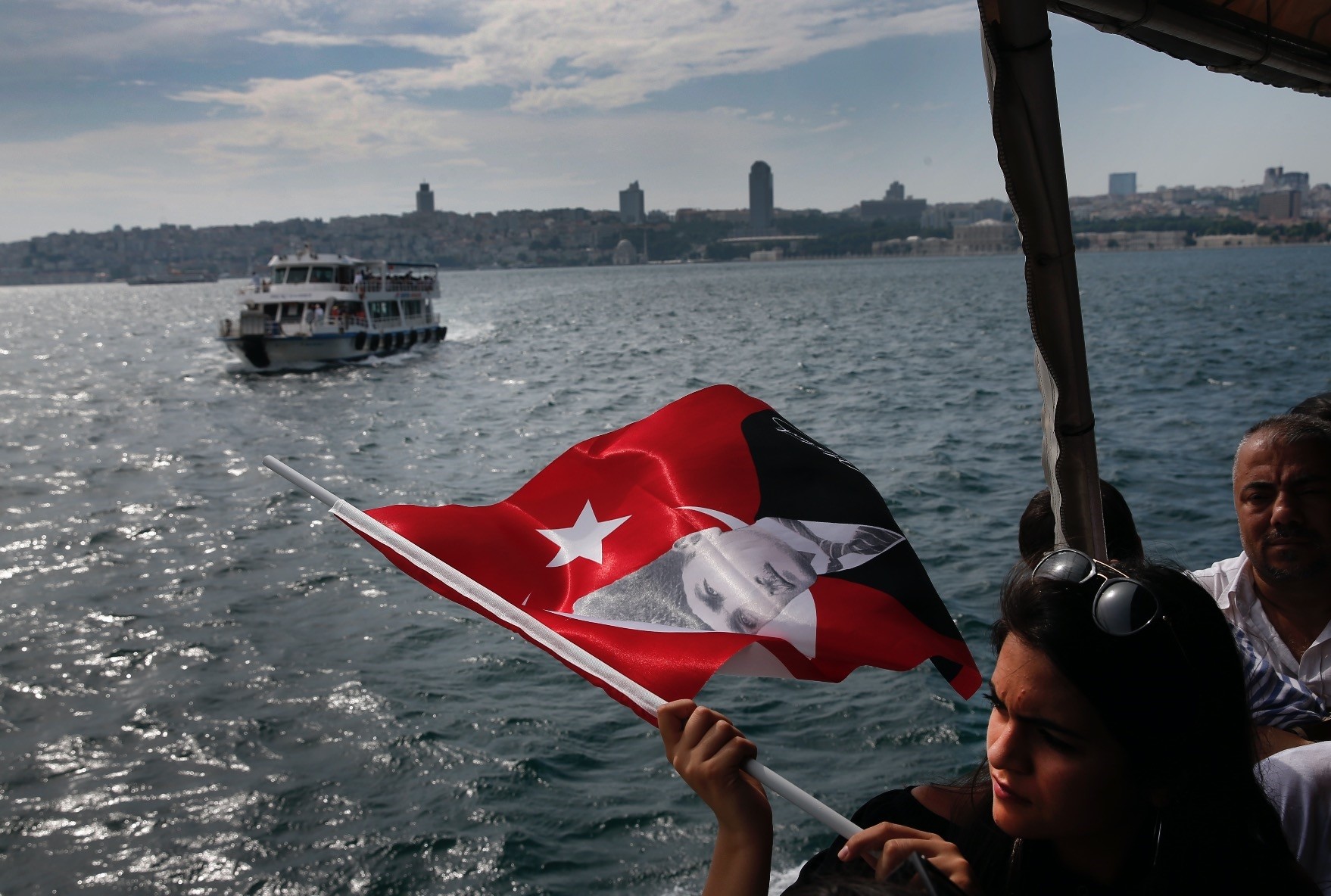 Aboard a boat crossing the Bosporus, separating Asia and Europe, a woman holds a Turkish flag decorated with a picture of Turkish Republic founder Mustafa Kemal Atatu00fcrk, Istanbul, June 16.
by Burhanettin Duran Jun 18, 2018 12:00 am

Ahead of the June 24 elections in Turkey, a colorful campaign is in full swing.

The war of words continues in various areas, including the fight against Gülenist Terrorist Group (FETÖ) terrorists and community lounges. Mr. İnce and Meral Akşener, another presidential hopeful, pledge to do more than the incumbent, Mr. Erdoğan, and their level of populism reminds many Turkish voters of the memorably populist 1991 election campaign. Knowing full well how important the upcoming elections are for Turkey's future, they do everything in their power to impress voters. As a matter of fact, CHP Chairman Kemal Kılıçdaroğlu lost control and resorted to intimidating language in a recent campaign event by taking credit for the AK Party government's decision to increase the monthly pay for pensioners: "I advocated it. You received it thanks to me. Therefore, you must vote for the CHP."

Obviously, the opposition's populist and aggressive narrative is part of an effort to deny Mr. Erdoğan a first-round victory in the presidential race and to reclaim their parliamentary majority. Having tried to remove the Turkish president from power by accusing him of one-man rule and dictatorship since 2013, however, the opposition has adopted a new approach this time around. In unison, opposition leaders claim that Mr. Erdoğan and his AK Party are "tired" and "unenthusiastic" and therefore doomed to lose the election. The AK Party is about to get hit by a "deep wave," they say. The Western media was quick to jump on the bandwagon to suggest that the Turkish president's popularity was "in decline" and to tell their audiences that he was fighting an uphill battle ahead of the upcoming elections.

To be clear, claiming that Mr. Erdoğan, who delivered on his 2014 promise of "becoming a sweating, running president" with extraordinary effort, had grown "tired" is out of touch with reality. It is a futile effort to criticize the Turkish president's performance, provided that he successfully completed megaprojects in many areas, including energy and the defense industry, and pledges to do more in the future. At the end of the day, the opposition can't change the conversation by talking about the incumbent's supposed fatigue.

The June 24 election is all about the institutionalization of the presidential system and deciding who can carry Turkey into the future. Turkish voters will decide which candidate is best suited to overcome the major challenges we face amid regional and global uncertainty and conflicts. They will determine which candidate can take our country to the next level.

Let us ignore Mr. Erdoğan's strong track record for a minute and concentrate on Turkey's role in the new world order and its war on terror.The real "deep wave" is how people respond to the following questions: Who is best equipped to continue the fight against FETÖ – Erdoğan, who successfully led the resistance against coup plotters on July 15, or İnce, who says he "received a phone call from America about irregularities in [Turkey's] request for [Fetullah] Gülen's extradition?" Who is more likely to eliminate the PKK corridor in northern Syria and Iraq where the great powers are competing for control? The incumbent, who successfully completed two military operations in northern Syria and seeks to hoist the Turkish flag in the Qandil mountains, or the CHP leadership, which claims there are no PKK militants there? What kind of president do the Turkish people want? A leader who knows inside out the ongoing power struggle in the international arena or a candidate who pledges to leave aside foreign policy and concentrate on negotiating with his coalition partners which system of government Turkey must have?