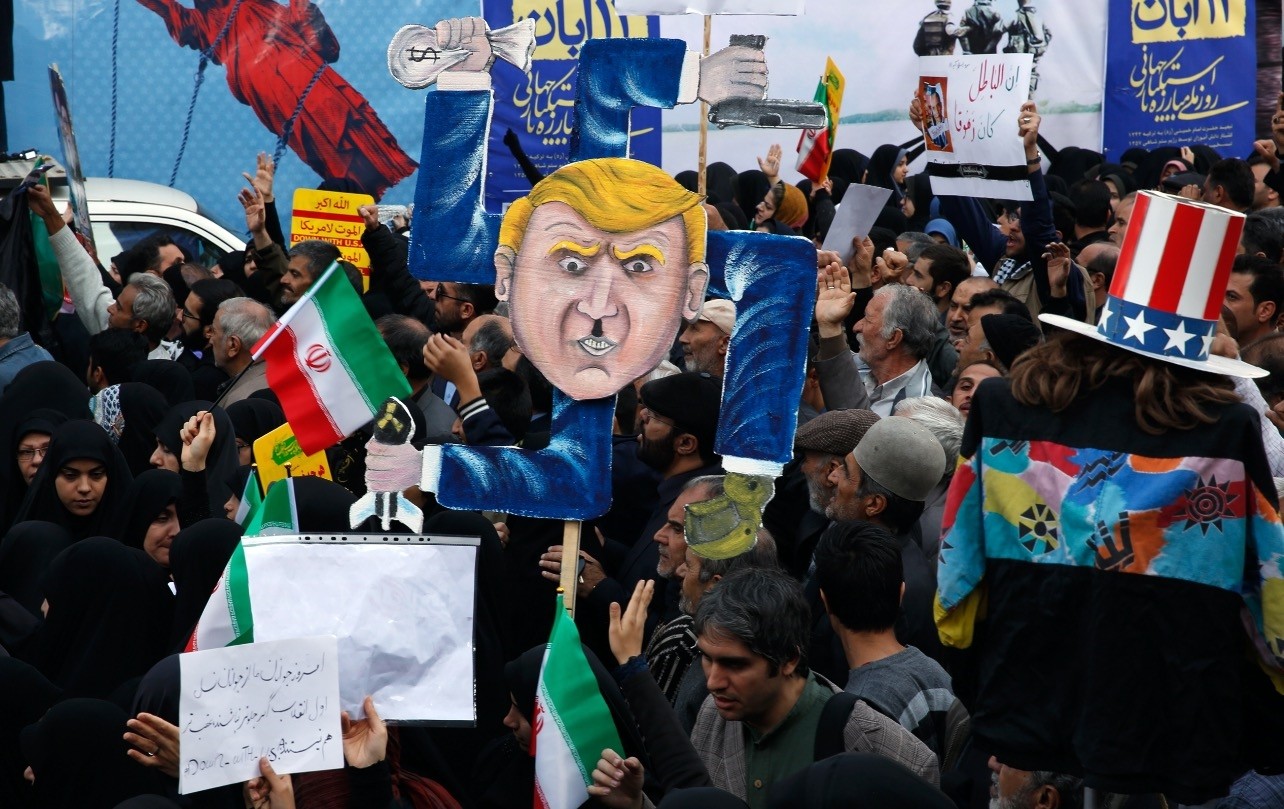 Iranians hold a placard showing a caricature of U.S. President Donald Trump during an anti-U.S. demonstration marking the 39th anniversary of U.S. Embassy takeover, in front of the former U.S. Embassy in Tehran, Iran, Nov. 4.
by Burhanettin Duran Nov 05, 2018 12:00 am

Today, the United States will reimpose economic sanctions on Iran that were lifted as part of the 2015 nuclear deal. The Trump administration's effort to mount "unprecedented financial pressure on the Iranian regime" will focus on the transportation, finance and energy sectors. Countries and companies that continue doing business with Iran also risk punishment. The United States, however, has granted temporary waivers to eight countries – Iraq, the United Arab Emirates, Egypt, Japan, China, South Korea, India and Turkey – on limited petroleum imports. To lift sanctions, Washington demands that Tehran end its support for terrorism, terminates its military engagement in Syria and stops building nuclear and ballistic missiles.

In May 2018, the Trump administration not only withdrew from the Iran nuclear deal but also provided the Iranians with a list of 12 conditions for renegotiation. One of those demands was to cut Iranian funding to "terrorist groups" such as Hezbollah, Hamas and the Palestinian Islamic Jihad. At the same time, the administration aimed to curb Iran's expansionist policies in the Middle East, which had unsettled Israel and the Gulf.

Washington's current effort to discipline the Iranians relies on a tight economic blockade. Meanwhile, other oil producers, including Russia and Saudi Arabia, must ramp up production to prevent the Iran sanctions, which will significantly reduce Tehran's oil exports, from causing a global crisis. Hence the Trump administration's unwillingness to take concrete steps against Saudi Arabia for the murder of journalist Jamal Khashoggi. At the same time, the U.S. wants to make sure that the Saudis do not cancel an order for military equipment that the administration says will create 600,000 jobs.

The Trump administration also wants to reach an agreement with the Turks on Iran. Washington's reluctance to lift sanctions on Turkey's interior and justice ministers and stalling joint military patrols around the Syrian city of Manbij reflected that priority. Likewise, it was no coincidence that U.S. Secretary of State Mike Pompeo expressed hope in a recent interview that "Turkey and President [Recep Tayyip] Erdoğan will come to understand that the U.S. is a better partner than Iran."

The most critical question, however, is how far the Trump administration, dominated by opponents of Iran, will go. Specifically, it remains unclear whether the White House wants regime change or a renegotiation of terms. The answer to that question could provide some insights into the ways in which Turkey and the rest of the region should deal with the storm coming their way.

Washington wants to secure the support of Europe, Turkey, Saudi Arabia and other regional partners to exert severe economic pressure on Iran. It seeks to facilitate a total collapse of the Iranian economy, which survives on oil revenues and already faces a serious currency crisis, to force the mullahs, fearful of a domestic rebellion, into renegotiation. In other words, President Trump wants to use his North Korea playbook to deal with the Iranians. Although he is unlikely to act as moderately as his predecessor, the United States is unlikely to end up in a military conflict with Tehran.

In recent weeks, the Khashoggi assassination raised doubts about the anti-Iran bloc comprised of Saudi Arabia, the United Arab Emirates (UAE) and Israel. With his reputation severely tarnished, Saudi Crown Prince Mohammad bin Salman is less likely to deliver on his promises regarding the effective containment of Iran and strong-arming the Palestinians into a peace deal. As the devastating conflict in Yemen has clearly established, Riyadh lacks the ability to compete with Tehran in proxy wars.

It won't be easy to force the Iranians into a renegotiation of terms with Washington's long list of demands on the table. In turn, Iran finds itself in a serious situation despite having lobbied Europe, Russia, China and Turkey with reference to the Trump administration's unilateralism. It remains unclear whether Europe, already looking for a new financial system, will address Iran's needs.

It would be unreasonable to think that Tehran won't resist at first. Yet the regime will agree to a renegotiation of terms if economic collapse fuels domestic revolts. If Turkey can manage that situation as successfully as the Khashoggi crisis, it stands to expand its own room for maneuver.