Instead of complaining about Russia, US must repair ties with Turkey 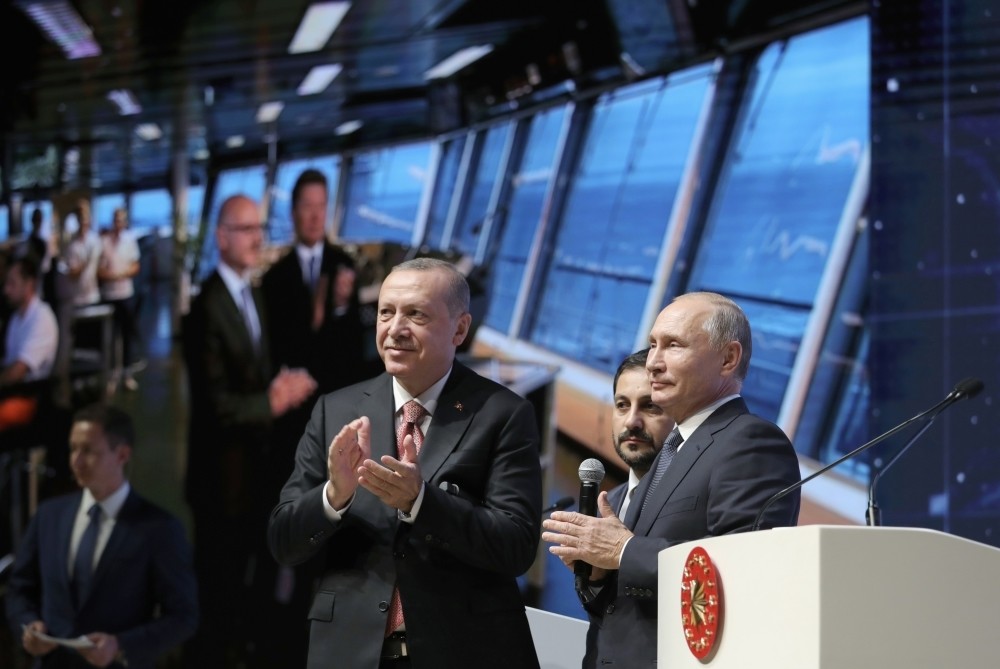 President Recep Tayyip Erdou011fan (L) and Russian President Vladimir Putin (R) applaud as they attend an event in Istanbul marking the completion of one of the phases of the TurkStream natural gas pipeline, Nov. 19.
by Burhanettin Duran Nov 21, 2018 12:00 am

The U.S.' misguided actions and the EU's passive stance toward the Middle East and the Syrian civil war have laid the groundwork for the Turkish-Russian rapprochement

Russian President Vladimir Putin visited Istanbul on Monday to mark the completion of a key phase of TurkStream, a natural gas pipeline connecting Russia and Turkey. The Russian leader met President Recep Tayyip Erdoğan for the sixth time this year in his third trip to Turkey. Putin had attended the groundbreaking ceremony for the Akkuyu nuclear plant in April and the four-nation summit on the situation in Syria on Oct. 27. In Istanbul, the Turkish and Russian presidents held talks on energy cooperation, the murder of Saudi journalist Jamal Khashoggi and the most recent developments in Syria – specifically, in Idlib and to the east of the Euphrates river.

As a result of the rapprochement since 2016, Turkey's cooperation with Russia has extended beyond traditional areas such as energy, tourism and the food industry. The two countries have been exploring new opportunities in the defense industry through an agreement for the purchase of the S-400 air defense system by the Turks, looking for ways to work more closely together in Syria and jointly assessing strategic priorities. On Monday, the Turkish president referred to the Russian Federation as "a reliable friend and natural gas supplier" with which Turkey could engage in "long-term cooperation." He added that Turkey's relationship with Moscow was not "contingent on impositions by other nations." Putin, in turn, stressed that a project like TurkStream could not be completed without trust between the two countries.

It is no secret that the growing trust between Erdoğan and Putin has been frustrating Western governments. Experts have repeatedly described Turkey's rapprochement with Russia as a new alliance, a symptom of Ankara's "axis shift" and an effort by the Turks to distance themselves from the United States and NATO. Others like to believe that Putin drove a wedge between Turkey and its NATO allies to undermine the Western alliance.

For the record, it would be wrong to treat Turkey's cooperation with Russia and Iran as the birth of a new, anti-Western alliance; yet, one cannot reasonably ignore that Washington's misguided actions and the European Union's passive stance toward the Middle East and the Syrian civil war have facilitated closer Turkish-Russian cooperation in the region.

The United States has violated the terms of its alliance with Turkey and betrayed Turkish trust by supporting the designated terrorist organization PKK's Syrian branch, the People's Protection Units (YPG), and harboring members of the Gülenist Terror Group (FETÖ), the group that orchestrated the July 2016 coup attempt in Turkey. Even French President Emmanuel Macron ended up having to tell U.S. President Donald Trump that France was a U.S. ally but not dependent on Washington. Provided that the U.S. has no choice but to work with Turkey in the Middle East, American interests would be best served by repairing relations with the Turks.

Burhanettin Duran is General Coordinator of SETA Foundation and a professor at Ibn Haldun University. He is also a member of Turkish Presidency Security and Foreign Policies Council.
Last Update: Nov 21, 2018 2:19 am
RELATED TOPICS