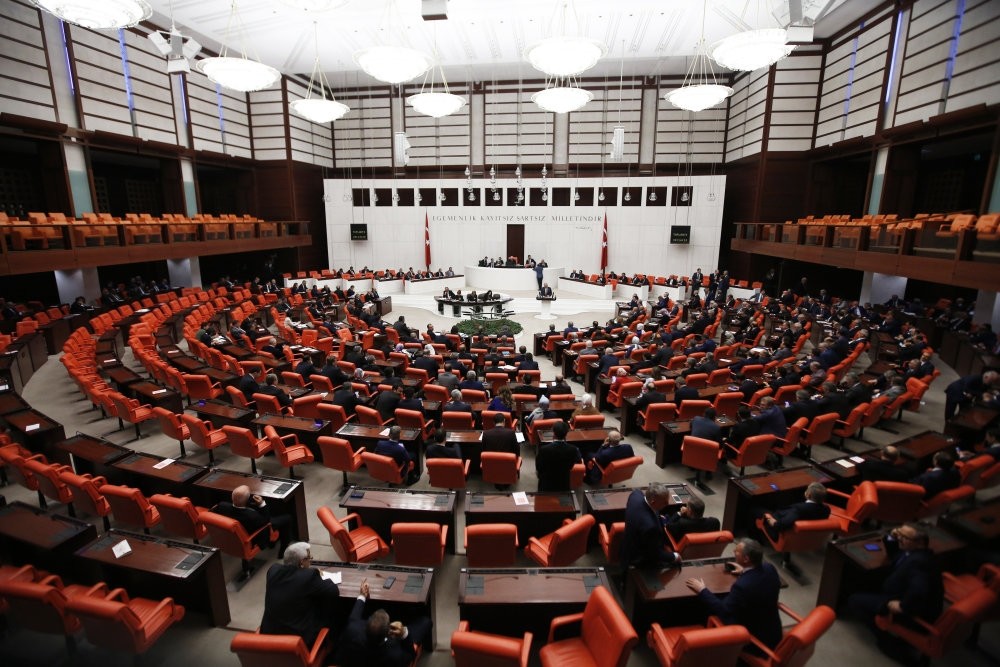 Lawmakers at work in the main chamber of the Turkish Parliament in Ankara.
by Burhanettin Duran Nov 24, 2018 12:00 am

The Erdoğan-Bahçeli meeting on Thursday reconfirmed that the two political blocs, namely the People's Alliance of the AK Party and MHP and the opposition's Nation Alliance, formed for the June 24 presidential elections, will remain in place for the next local elections

Turkey's leading political parties are going through their shortlists of mayoral candidates for the March 2019 local elections. The picture will become clearer over the next 10 days, and the candidates and their parties will subsequently concentrate on their respective campaigns.

It would appear that temporary alliances entailing a certain level of cooperation between various political parties will dominate the political arena on March 31. The Republican People's Party (CHP) and the Good Party (İP), which were part of the Nation Alliance in the June 2018 elections, have been negotiating an agreement on the basis of certain principles. They are currently discussing the possibility of coordinating their campaigns in nine provinces. At the same time, CHP Chairman Kemal Kılıçdaroğlu has been trying to form a covert alliance with the Peoples' Democratic Party (HDP), whose supporters he hopes to attract in metropolitan districts by nominating HDP-friendly candidates.

Meanwhile, there is heightened activity within the former People's Alliance. Leaders of the AK Party and the Nationalist Movement Party (MHP) held a new round of talks on Thursday to start negotiating a "partial cooperation." Sources familiar with the matter indicate that the talks are going well.

It was clear all along that the transition to the presidential system would compel major political parties to become part of broader alliances. That phenomenon is becoming increasingly commonplace. In addition to influencing political calculations, electoral alliances promote a culture of compromise.

Electoral alliances in Turkey date back to the 2014 presidential election, when several opposition parties jointly nominated what they called an "umbrella candidate." Yet, Turkish political parties always found it difficult to negotiate and enter such agreements with their competitors in local elections. With the exception of the AK Party, all major parties stood to suffer serious losses if they failed to ally themselves with others. The MHP and the İP were particularly vulnerable. Yet, two developments factored into the decision to revive the People's Alliance.

First, the CHP's emerging partnership with the İP and the HDP posed a challenge to the AK Party in metropolitan areas including Istanbul and Ankara. Had it not been for a second development, the AK Party could have answered that challenge on election day: The ideological agenda of the upcoming local elections threatened to undermine the "national consensus" behind the People's Alliance. In recent weeks, two issues rose to prominence in Parliament: The İP promoted a rigid and exclusive type of Turkish nationalism by talking about Turkish identity and Syrian refugees. It attempted to lure away MHP voters by coming out in favor of the pledge of alliance and other controversial steps. Meanwhile, the CHP leadership steered clear of the nationalism debate in an attempt to impress the HDP base ahead of the local elections. Meanwhile, a war of words about Mustafa Kemal Atatürk and the rest of Turkey's symbols created an artificial political agenda.

Those developments could have made it difficult for the AK Party and the MHP to preserve the People's Alliance. A poor display on election day would have fueled tensions between the two parties and threaten their cooperation on the floor of Parliament. Perhaps more significant was that the political debate could have moved away from patriotism and the war on terror – the two pillars of the People's Alliance. Ignoring the vast areas of overlap between their approaches to national identity, the AK Party and the MHP would have focused on their limited differences. Under those circumstances, it could have been possible for the HDP to break its isolation by distracting the public from its advocacy of ethno-nationalism and its organic ties to the designated terrorist organization PKK. Keeping in mind the most recent ruling of the European Court of Human Rights on the detention of former HDP Chairman Selahattin Demirtaş, the CHP leadership would have been able to talk about his release.

Under those circumstances, the Nation Alliance would have made progress regarding its stated goal of uniting the anti-Erdoğan opposition, as the People's Alliance stood to lose its post-July 2016 role as the dominant force in the political arena. It would be wrong to describe the People's Alliance's commitment to national survival and patriotism as a pivot to the status quo. As a matter of fact, the alliance has assumed an active and proactive role around the July 15 resistance and Turkey's active foreign policy.

In the end, it was probably a good idea for both parties to continue their cooperation in the local elections.