The US' 'Kurdish card' serves more than one purpose 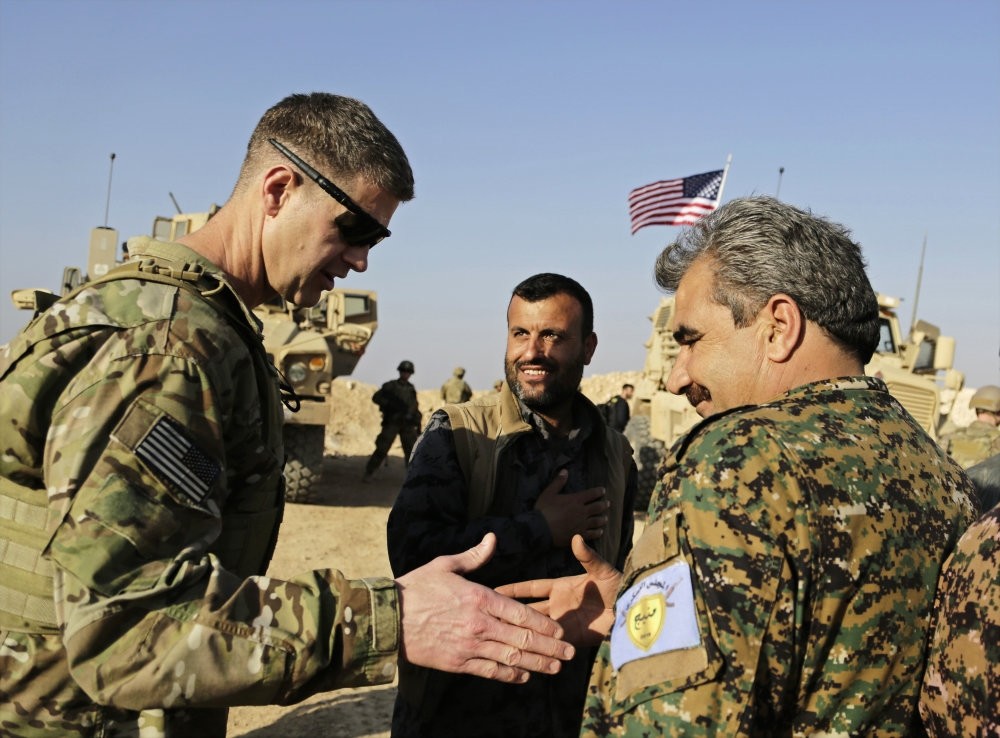 Washington's policy of supporting the PYD and YPG in Syria aims to push regional states into more clashes, which will only benefit Israeli interests at the end of the day

The famous Middle Eastern expression, the "Kurdish card," was last used on Dec. 2 by Russian Foreign Minister Sergey Lavrov. "The United States is trying to form a state-quasi formation in the region east of the Euphrates and it is very dangerous to play the Kurdish card [while] keeping in mind only [their] own geopolitical designs in one part of this region, which the United States is currently demonstrating," Lavrov said.

For some time, Russian officials have been in an effort to draw the international community's attention to the east of the Euphrates and they have just recently re-expressed their concerns on the U.S.' regional stance – playing the Kurdish card in Syria.

A few days ago, the Russian army's head Valery Gerasimov repeated the very same Russian argument by stating, "They [the U.S.] are also forming a government for the so-called Democratic Federation of Northern Syria. The Americans, that support the Kurds' separatist sentiments by delivering arms and military equipment, allow them to oppress Arab tribes."

With Gerasimov, Russia has simply sent a warning message to the U.S. The Kremlin's intention is clear: Showing the U.S. as a power that threatens the territorial integrity of regional countries, particularly Syria.

The "Kurdish card" was first used during the World War I period to divide the Ottoman Empire. However, with the Kurds preferring to stay with the Ottomans and the Turkish Independence War making the Treaty of Sevres invalid, the region was prevented from being divided into even more pieces.

Since then, the Kurdish card policy has remained active, as it was used by Britain after WWI and then by the U.S. after WWII against regional states. The Iraqi Kurds in Mullah Mustafa Barzani's era, for example, who came closer with the Soviet Union in 1958, were the first target of Washington.

Later on, the United States supported Barzani in the 1974 Revolt, but then left him in the lurch. During the First Gulf War in 1991, the very same U.S. policy abondoned the Iraqi Kurds in the face of Saddam Hussein's Iraq. Even so, an autonomous government was somehow allowed to be formed in northern Iraq and, after the U.S.' Iraqi invasion in 2003, the current shape of the regional government was created.

In 2017, the Barzani administration was not supported by Washington in their independence referendum. This was related to the U.S. wanting Iraqi Kurds as an ally as part of its policy to curb the Iranians. The U.S.' recent decision to expand the Herir military air base in Irbil also proves the U.S. is still interested in playing the Kurdish card in Iraq.

With the emergence of the Syrian civil war in 2011, Washington has found another card to play in the region – the outlawed PKK's affiliates in northern Syria. The U.S. started using the designated PKK terrorist organization's Syrian wings, the Democratic Union Party (PYD) and People's Protection Units (YPG), for its purposes in northern and eastern Syria.

Ignoring all Turkish critics and reactions, the U.S. didn't change its dangerous YPG policy and is still solidifying the bloody group's members east of the Euphrates without showing much concern over the YPG's Marxist ideology or its demographic cleansing against Arabs and Kurds.

Furthermore, the U.S. has announced a new project to establish some observation points near the Turkish border. The points, to be controlled by YPG members, are a measure taken by the U.S. against the possible Turkish offensives against the YPG terrorists. All these developments prove Moscow's argument right in the whole Middle East.

There is no doubt that the U.S.' YPG card is a direct threat against not only Syria but other regional states as well. What's more, the game Washinton is playing doesn't aim to help the Kurds form a state, but to pave the way for non-state groups to keep their presence active. Related to this, these U.S. moves have the potential to lead to more unending bloodshed in the wider region. In such a scenario, Kurds are likely to suffer more.

Besides, it has been rumored for a while in all Middle Eastern capitals that the United States has a deeper aim in the region. It is claimed that the sole goal of the U.S. is to provide for the security of Israel by dividing the rest of the regional states. In order to make Israel the leading dominant state in the region, other regional powers should be weakened.

For this purpose, the Kingdom of Saudi Arabia, the closest ally of the U.S. which is about to complete an alliance with the Israeli state has to be weakened as well. What's worse, the Trump administration's ongoing policies support such claims. U.S. Vice President Mike Pence must have been right when he said, "President Donald Trump, a man who I believe is the greatest defender the Jewish state has ever had sitting in the Oval Office."

The first meaning of the Kurdish card is that the Kurds are pushed to clash with Arabs, Turks and Iranians; yet it also shouldn't be forgotten that this very U.S. plan also aims to unite all the Arabs of the Saudi Arabia-UAE front and Israelis in the same line in order to limit the Iranian presence. By doing so, the U.S. will lead the Gulf countries to stop standing up for the rights of Palestinians and forces them to finance the YPG at the same time. Syrian sovereignty and the future of the Arabs in the country are also put at risk. In the worst scenario, the Arabs are separated from one another and polarized. This is another development that will solely benefit Israeli interests at the end of the day.