Macron is in trouble, but he isn't alone 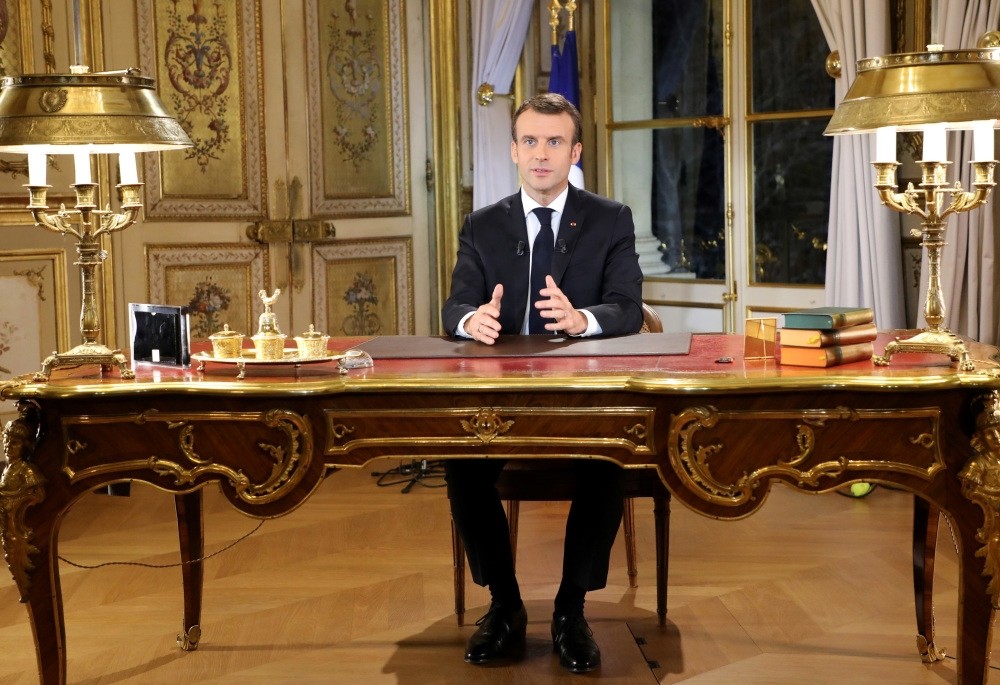 French President Emmanuel Macron poses before a special address to the nation, his first public comments after four weeks of nationwide ,yellow vest, protests, at the u00c9lysu00e9e Palace in Paris, Dec. 10.
by Burhanettin Duran Dec 12, 2018 12:00 am

Although the protesters' anger is directed against French elitism, we cannot afford to ignore that the ongoing crisis is crucial to the future of Europe and democracies around the world

The "yellow vest" protests in France have put President Emmanuel Macron in a tough spot. His administration has already backtracked on a proposed fuel tax hike, yet the gilets jaunes are still angry. To make matters worse, U.S. President Donald Trump continues to taunt Macron on social media. Trump's social media campaign has been so effective that the French foreign minister was compelled to issue a statement urging Washington not to meddle in France's internal affairs.

The war of words between Trump and Macron, which will presumably continue for the foreseeable future, isn't just another confrontation between two leaders. It reflects a broader ideological and strategic dispute shaping the new world order. Let us recall that the French president has been a vocal critic of the Trump administration's "America First" policy. In Paris, where world leaders gathered to mark the centennial of the end of World War I, Macron came out against nationalism. Those steps reflected the French president's decision to stop trying to make nice with Trump. At the same time, Macron attempted to side with Chancellor Angela Merkel's Germany in its defense of liberal values. In other words, France was trying to form a new political mainstream that called for the creation of a European army for the continent to take care of its own business.

Although Macron piggybacked the populist wave in Europe, he – unlike Trump – wants to strengthen the liberal center. As a matter of fact, the French president identified his ideal as a sovereign, united and democratic Europe in a September 2017 address to Sorbonne University. Yet, the yellow vest protests revealed how deep the crisis of globalist, pro-European and liberal politics really went.

Although the gilets jaunes' anger is directed against French elitism, we cannot afford to ignore that the ongoing crisis is crucial to the future of Europe and democracies around the world. Unlike the 2005 protests in French suburbs, the current riot builds on the demands of the lower-middle classes – which are harder to please. It goes without saying that the middle class has played a key role in revolutions and democratic consolidation. The crisis of the French middle class indicates that the collapse of mainstream politics in Italy, Hungary and Greece has reached France, which is crucial to European integration. Although Annegret Kramp-Karrenbauer, a close ally of Merkel, has replaced the outgoing leader of the conservative democrats in Germany, the far-right still has a claim to power in Berlin.

There is no reason to believe that populist nationalist movements will come up with solutions to the population's economic problems. The spread of economic protectionism will only serve to lower the living standards of people around the globe. At the end of the day, that development would affect the lower and middle classes more than others.

Populism cannot be a viable solution in the long run. Yet, democracies around the world face serious short-term challenges. Failure to adopt nationalist economic policies will likely force democracies to embrace identity politics. After all, criticizing globalization isn't exactly difficult. The problem with protectionism, however, is that it might not actually create jobs. If anything, it could limit the general population's access to goods and services. In other words, populist nationalism could not only fail to create new opportunities but also fuel xenophobia, which would prevent businesses from relocating their operations to cheaper parts of the world. That's the Gordian knot of populism. Isolationism ultimately means a decline in purchasing power – something that even identity politics cannot legitimize.

Under these new circumstances, things will be easier for the United States, which uses its hegemony to fuel nationalism and protectionism. By contrast, Europe will experience a painful crisis. When anti-EU movements seize power across the continent, the European dream of Macron and others will die. Germany's powerful economy alone cannot keep Europe afloat. Needless to say, the Germans cannot be expected to voluntarily share their wealth with the rest of the European nations. As such, Macron's critique of nationalism and the proposed European army seem to be a last-ditch effort to prevent what is already in motion. Obviously, the French president faces an uphill battle.

Can the European Union nurture a sense of loyalty that can compete with national identities? The perceived loss of sovereignty pushes European nations toward nationalism. Will they want to unite under a European identity? What type of regime will democracies with troubled middle classes produce? The European Parliament elections in May 2019 will provide valuable insights into those processes.

One thing is clear: The current crisis isn't just Macron's problem. All democracies stand to face more serious turbulence and efforts by various governments to undermine each other will only make things worse.

Burhanettin Duran is General Coordinator of SETA Foundation and a professor at Ibn Haldun University. He is also a member of Turkish Presidency Security and Foreign Policies Council.
Last Update: Dec 12, 2018 8:00 am
RELATED TOPICS