The United States must take a step back in Syria 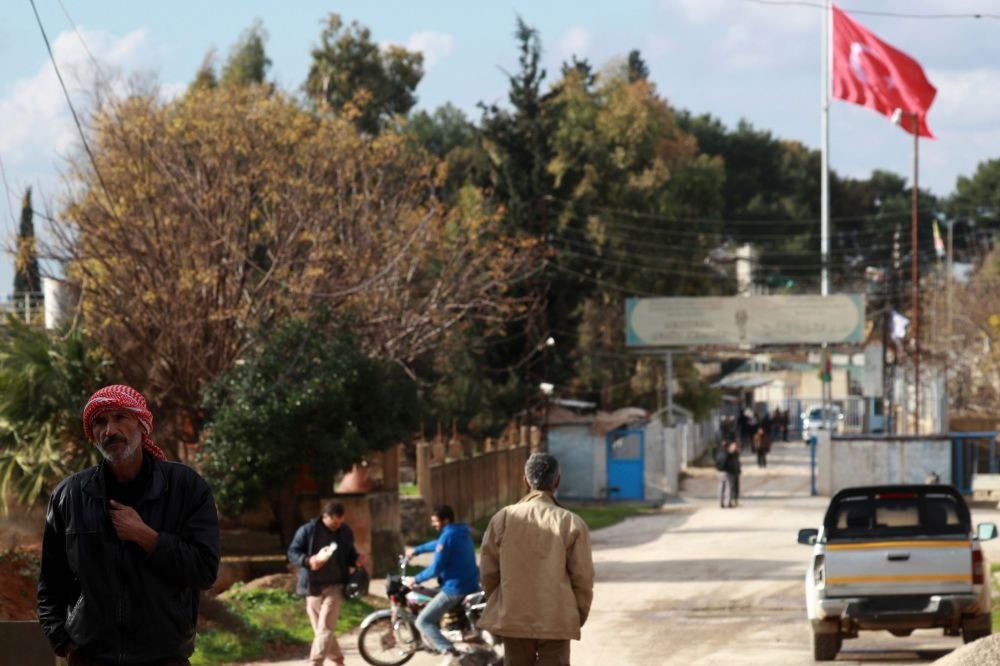 Residents are pictured walking in the Syrian town of Darbasiyah as the Turkish flag flutters on the opposite side of the border crossing with Turkey, Dec. 13.
by Burhanettin Duran Dec 15, 2018 12:00 am

Ankara has declared a counterterror offensive against the YPG, signaling that it is time for U.S. forces to step back from northern Syria in order to avoid a possible confrontation with the Turkish military

President Recep Tayyip Erdoğan announced this week that a military incursion east of the Euphrates river was going to happen "within days." The imminent offensive will be Turkey's fourth major operation in Syria after Euphrates Shield, Olive Branch and the establishment of observation posts around Idlib. This time around, the Turkish forces will target the designated terrorist organization PKK's Syrian affiliate, the People's Protection Units (YPG), which has been under U.S. protection. Although the next mission's objective is different, Turkey's approach hasn't really changed. Turkish officials explained in advance what they intended to do in Syria. They have informed the public about ongoing diplomatic contacts with their relevant military counterparts and underscored their determination to act. At home and abroad, it was made clear that Turkey was committed to this particular course of action. The Turkish decision to move came after Russia publicly accused the United States of trying to establish a so-called Kurdish state in Syria – which alone suggests that the time is right.

The Turks have been open about their intention to drive out the PKK's Syrian franchise from northern Syria for a long time. Washington, in turn, has been stalling Turkey in Manbij, which remains under the same terrorist organization's occupation, and setting up observation posts in an attempt to protect YPG militants on the ground. Most recently, the U.S. Chairman of the Joint Chiefs of Staff Joseph Danford said that Washington had trained 20 percent of a 40,000-strong "stabilization force." Having divided the Syria file into two pieces, the Trump administration seems to think that it can keep things under control by taking tactical steps. The United States continues to follow Brett McGurk's approach by training YPG militants as a step toward regional autonomy and tries to mitigate Turkish concerns by putting a bounty on senior PKK commanders and having U.S. Special Representative for Syria James Jeffrey preach the gospel of cooperation.

Although Jeffrey likes to describe his country's relationship with the PKK's Syrian affiliate as temporary and tactical, he himself said recently that defeating Daesh wasn't Washington's only objective in the Syrian theater. According to Jeffrey, the United States will maintain a footprint in PKK-occupied parts of Syria until Iranian proxies are forced out and the political transition is complete. In other words, U.S. troops will stay in Syria not temporarily but in the long run.

Ironically, Washington has been reluctant to identify its endgame and to share details of its game plan with Turkey, its NATO ally. U.S. officials reportedly claim in meetings that they, too, do not know what they want to accomplish in Syria, but that's just another stalling tactic. In the Middle East, all blueprints seem to be temporary and tactical at first – just before they evolve into permanent features. History books are filled with supposedly temporary faits accomplis by Britain and France, and later the United States and Israel. We are all too familiar with the disastrous outcomes of supposedly strategic plans and so-called humanitarian interventions that those powers have carried out in this part of the world. Iraq and Afghanistan attest to that fact. Yet Turkey is determined to prevent another fait accompli involving YPG forces. Turkish officials maintain that neutralizing the terror threat next door is a cornerstone of Turkey's national security strategy – even if it takes decades to defeat the enemy.

There are still many questions to be answered: How exactly will the operation play out? Will Turkish troops cross into predominantly Arab areas located between Tel Abyad and Ras al-Ayn? Will there be a hot conflict between Turkish and U.S. troops? We will find out when Turkey gives the green light. Yet here's a quick point on the possibility of a hot conflict between Turkey and the United States: It goes without saying that any exchange between the forces of two NATO allies would fuel a serious crisis that both sides must avoid at all costs. That crisis would be unprecedented. That's why Turkey provided advance warning to the United States and decided to carry out the operation after lengthy deliberations. Under the circumstances, there is no reason to believe that Turkish troops will clash with U.S. forces on the ground.

At the same time, the two countries attach different amounts of importance to the situation there. The Turks see the terror threat next door as a vital threat against their national security and territorial integrity. The United States, in turn, says its military commitments on the ground are temporary and tactical. Seeing that, it is Washington's responsibility to withdraw its forces from those parts of Syria that its NATO ally, Turkey, will liberate. U.S. officials cannot afford to turn a blind eye to the level of determination in the Turkish capital Ankara. It would take a bigger footprint in Syria to protect the YPG militants. Even if Washington were to deploy additional troops to the conflict zone, it cannot have its way without negotiating terms with Turkey.

Burhanettin Duran is General Coordinator of SETA Foundation and a professor at Ibn Haldun University. He is also a member of Turkish Presidency Security and Foreign Policies Council.
Last Update: Dec 15, 2018 9:54 am
RELATED TOPICS