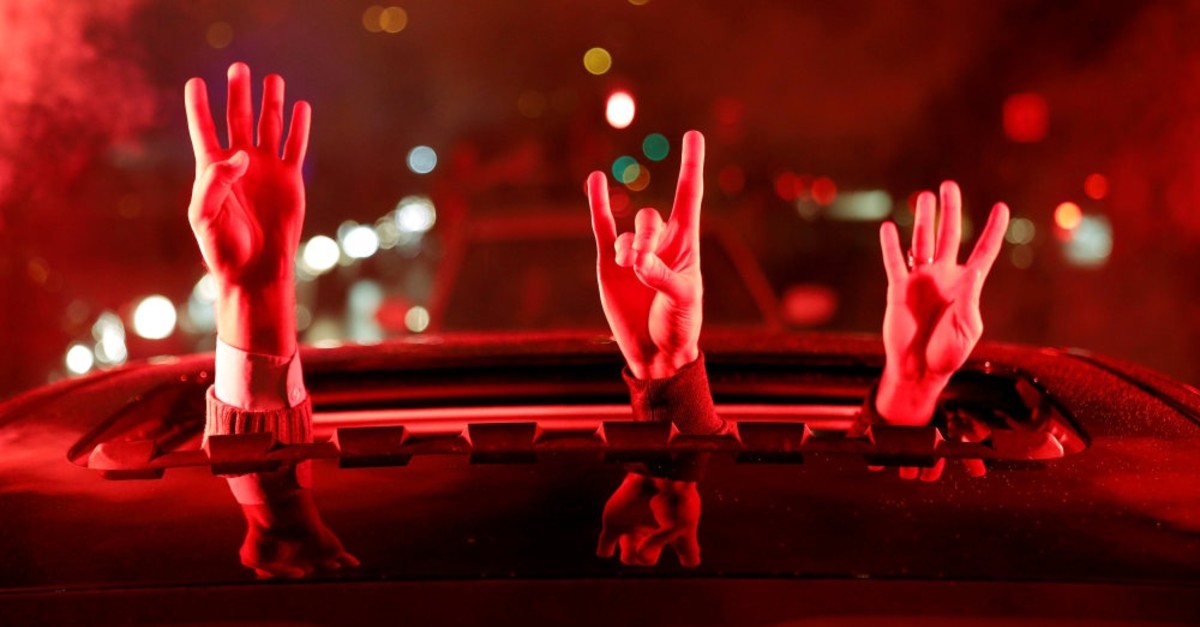 Supporters of the People's Alliance, comprised of the AK Party and MHP, make the symbolic finger gestures of their parties u2014 the wolf gesture of nationalist MHP (C) and the Rabia sign of the AK Party (L & R) u2014 during a celebration of election results
by Burhanettin Duran Apr 09, 2019 2:19 am

Turkey's municipal election was a hard-fought battle between two alliances. The vote took place in line with democratic maturity, as local communities elected their new mayors. Among other things, the 2019 municipal election demonstrated that Turkey was indeed a consolidated democracy capable of overcoming challenges through electoral processes. It also revealed the meaninglessness of the charge of authoritarianism. Obviously, any post-election public debate is bound to revolve around the winners, the losers, and the electorate's message to the country's political leadership. Let's start there: The People's Alliance received almost 52 percent of the vote, whereas the Justice and Development Party (AK Party) became Turkey's most popular movement with 44.3 percent. It also managed to preserve its level of popular support from last year's national elections – which means that the Turkish leadership won't consider early elections. Sunday's vote presents Turkey with an opportunity to concentrate on economic reforms, foreign policy and the presidential system's consolidation. Four years, if used skillfully, is long enough to change the nation's political calculus.

The Nation Alliance, by contrast, found an opportunity to showcase its abilities to voters. It won the popular vote in the Turkish capital Ankara, whereas the election result in Istanbul remains unclear. Indeed, the Nation Alliance (as opposed to its various components) have an opportunity to impress voters, as Mansur Yavaş and Ekrem Imamoğlu, its mayoral candidates in Ankara and Istanbul, respectively, received support from not just the Republican People's Party (CHP) but the entire alliance. In this sense, elected mayors will have to manage demands from and conflicts of interest between the CHP, the Good Party (İP) and the Peoples' Democratic Party (HDP). As the responsibility to govern replaces the comfort of criticism, opposition-affiliated mayors will have to show local residents that their campaign rhetoric was true and they can back up their words with action.

The strong performance by the People's Alliance served both its components. The AK Party won 15 metropolitan mayoral races and 24 other provinces, whereas the Nationalist Movement Party (MHP) emerged victorious in one metropolitan district and 10 provinces. By contrast, the CHP alone benefited from the Nation Alliance's performance by claiming 11 metropolitan and 10 provincial municipalities and increased its share of the popular vote. While the İP failed to win anything, the HDP's popularity dropped to 4 percent and the movement lost a lot of ground in eastern and southeastern Turkey – notably in Şırnak, Ağrı and Bitlis.

The HDP's failure to distance itself from the terrorist organization PKK and its support for the group's devastating urban warfare campaign took a toll on the HDP's popularity. At the same time, ethnic nationalism's appeal was limited by those developments. Meanwhile, the People's Alliance benefited from the improved security situation in the relevant areas.

Without a doubt, the Nation Alliance's component parties will take stock of their accomplishments and losses as soon as the election results sink in.

The most interesting aspect of Sunday's municipal election was that electoral alliances, which endorsed rival candidates, determined the outcome of metropolitan races. It would seem that the two-bloc system, an outcome of the presidential system, is here to stay. At the same time, electoral alliances have a positive impact on the strength of mainstream politics. Yet the 2023 election will determine whether that argument holds.

Political leaders and candidates cannot focus on consolidating their respective alliances alone. They must predict how the choice of candidates and campaign rhetoric impact the performance of their alliances. The choice between the two candidates is made based on a mix of ideological antagonism, changes in voter sociology and hard work. This is the new challenge for Turkey's political parties.

Winners and losers alike have to rise to the serious challenge of learning the right lessons from the 2019 municipal elections. After all, anyone can claim to have been successful based on the election results. The right lessons must be no less or more than the truth. As various movements take stock, they must concentrate on the institutions, processes, principles and the changing sociology of voters rather than individuals. They must take into consideration how voters' demands are changing in metropolitan areas.

The first step toward the 2023 election is about taking stock of accomplishments and shortcomings.