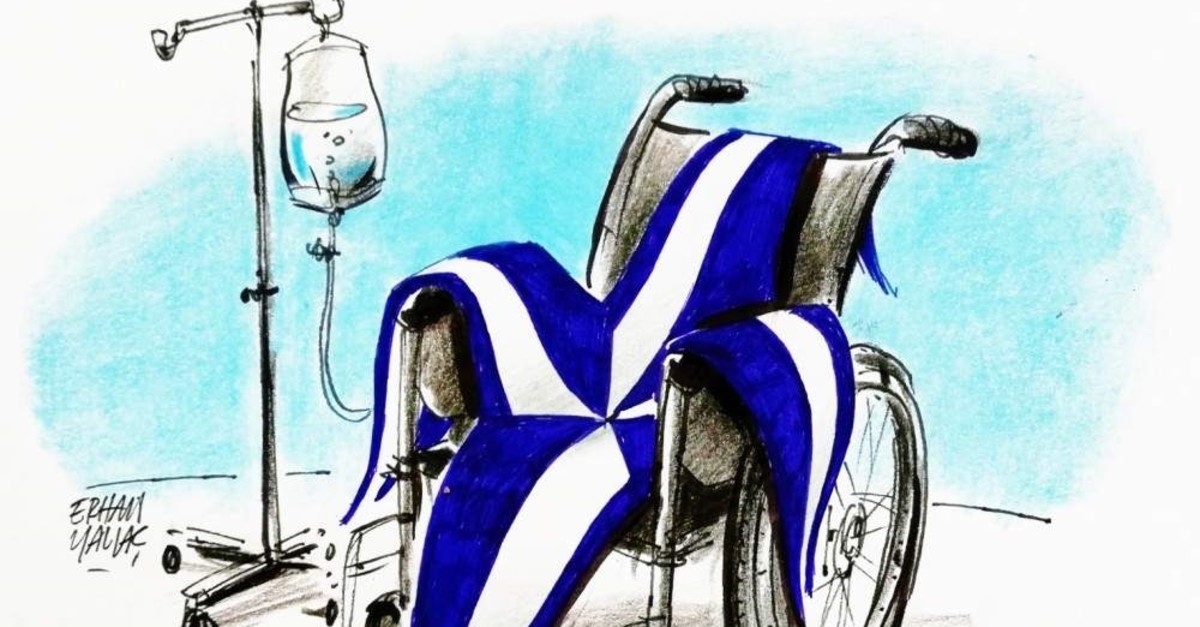 Illustration: Erhan Yalvau00e7
by Burhanettin Duran Nov 12, 2019 12:29 am
French President Emmanuel Macron told The Economist last week that NATO was “brain dead.” He blamed the alliance’s supposed problem on the lack of “coordination... of strategic decision-making between the United States and its NATO allies.” Macron added that Turkey’s actions were “uncoordinated,” warning that NATO failed to monitor the actions of its members.
In other words, Macron is very unhappy with Washington’s withdrawal from northern Syria and Operation Peace Spring. He is extremely frustrated with the decision to “sacrifice” the Syrian Democratic Forces (SDF) – a front for the People's Protection Units (YPG), the PKK terrorist organization's Syrian affiliate. Building on that anger, Macron called for the creation of a European defense system, independent of the United States. German Chancellor Angela Merkel swiftly responded to the French president’s remarks, saying that NATO membership was in Berlin’s best interest.
Macron’s words embody his populist approach to foreign policy – an attempt by the French president, from whom voters expected plenty, to distract attention from his inability to implement reforms. Quite “well-behaved” in his phone calls with President Recep Tayyip Erdoğan, he criticizes Operation Peace Spring, hoping that he can fuel a public controversy ahead of next month’s NATO Leaders Meeting in London.
The French leader is obviously aware of Europe’s need for U.S. support and NATO. He knows that Central and Eastern European countries, which fear Russia, do not support an alternative to NATO. Macron also understands that Germany, Europe’s only economic powerhouse, has zero interest in financing a European army – seeing that Berlin already bankrolls the European Union.
For some reason, Macron has neglected to openly share which French interests are at risk in Syria, where he has followed Washington’s lead. Perhaps this severe case of indigestion for the French president is due to Turkey twisting Washington’s arm to block the creation of a PKK/YPG statelet within Syria’s borders. It is possible that Macron has actually bought into the fairy tale of “secular Syrian Kurds” – which he and his friends made up. Indeed, he will have to remember that Ferhat Abdi Şahin, the YPG ringleader, was behind a series of deadly terror attacks in Turkey between 2005 and 2012. One way or another, Macron will have to accept that Turkey won’t stomach attempts by outsiders to engineer its neighborhood.
There are many things to be said about NATO’s crisis. One could talk about the chaos that the United States has fueled by trying to redefine its global role, the European Union’s own problems, Brexit and Russia’s attempts to strengthen its influence over Europe. To be perfectly honest, NATO’s response – or lack thereof – to Turkey’s counterterrorism efforts during the Syrian civil war was among the most serious crisis areas. Again, where certain Western governments stand on terror threats, including the PKK and the Gülenist Terror Group (FETÖ), is incompatible with our shared strategic values and the spirit of partnership. Indeed, choosing the YPG, a terrorist group, over Turkey, a NATO ally, when it comes to fighting Daesh terrorists amounts to the death of the spirit of alliance.
Above all else, Macron must understand that he runs a country far weaker than it was during World War I – when it dared to redraw the map of the Middle East. If the French president wants to exert influence over the new Syria, he has no choice but to cooperate with Turkey – his NATO ally. France will also have to take back its citizens who joined Daesh, and work with Turkey on the refugee crisis.
The Turkish government needs to patiently make Western governments appreciate Ankara’s legitimate concerns. We must stand our ground, although they try to legitimize the PKK’s Syrian branch in the public eye. Let us recall that the PKK has killed thousands of Turkish citizens since 1984. The group was designated a terrorist entity by the United States in 1997 and the European Union in 2002. Despite adding the PKK to their terror lists, European governments allow the group to operate under their noses. PKK operatives raise money and recruit militants in Europe. One wonders how many PKK terrorists have been extradited to Turkey by European nations.
It seems that there is a long road ahead of Turkey when it comes to fighting terrorist organizations like the YPG and FETÖ. Despite being stuck with allies whose souls have died, we must be determined to get results.

Burhanettin Duran is General Coordinator of SETA Foundation and a professor at Ibn Haldun University. He is also a member of Turkish Presidency Security and Foreign Policies Council.
Last Update: Dec 20, 2019 1:37 am
RELATED TOPICS