The Spanish treasure lying at the bottom of the Atlantic 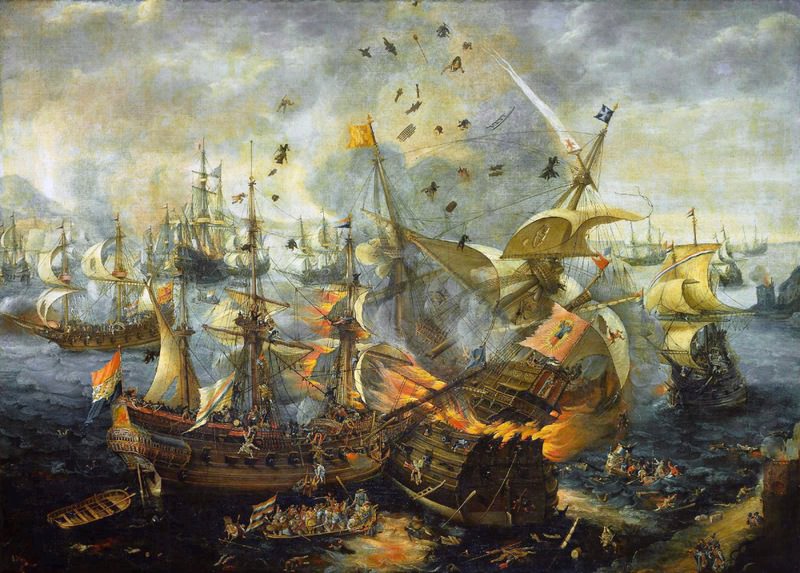 After the Spanish reached the shores of the Americas they began exploiting the continent, but struggled against pirates while carrying plundered treasure back to Europe. Even though other powers cut them down to size in the 19th century, it created many areas with Spanish culture and the Spanish language

Spanish galleon used to navigate between Spain and the Americas twice a year (in January and August) between the 16th and 18th centuries. The fleets which feature two convoys one with 30 ships and one with 90 ships set sail from Spain's Cadiz port. The convoys followed the same route until the offshore of the Antilles and one of them sailed to Mexico's Veracruz while the other sailed to Colombia's Cartagena. However, as the piracy in the seas increased, the Spanish began to send the convoys separately in 1582. Hence, a part of the commercial load was protected against the pirate attacks.

As of 1582, a fleet (flotilla) set sail from Cadiz to the colonies in the Americas once in May for Veracruz and once in August for Cartagena. The first convoy left some of its ships in the Caribbean and Honduras on its way. On the other hand, the galleons that set off at the end of the summer stopped at Cartagena and Portobello which is a port in the Atlantic. The two convoys met in Havana in February after spending the summer in the Americas and returned to Spain under the protection of war ships. The round trip took about eight to 12 months.

These ships were boats 50 meters in length. Each of them was armed with 50 or 60 cannons. They carried the products that were produced in Europe to Spain's colonies and the gold and silver of the colonies to Spain. During those centuries, two thirds of the Americas belong to the Spaniards. The American gold and silver being washed with the tears and blood of the Indians were carried to the Old Continent. As a result of this, Europe built its wealth, civilization, industry and new colonial empires. The East which was deprived of this was condemned to fall behind the West.

The ships were very attractive targets for the British, Dutch and French pirates during their route back as they carried vast amount of gold and silver. Therefore, the ships were well-protected against the looters. Nevertheless, one of the fleets got caught and destroyed by Dutch Admiral Piet Hein off Cuba in 1628 and the other by British commander Robert Blake off the Azores in 1657. Novels about pirates which have been read with curiosity for all those years focus on the bandits who wanted to get their hands on the gold carried by these fleets.

The storms of the oceans were also the cruel enemies of these fleets. Only half of the fleet with 130 ships which set sail on June 22, 1588 from Spanish port of La Coruna were able to return home. The rest sank after they were caught by the storm off England. The treasure that they carried was buried in the Atlantic Ocean.

Following days of search in 1968, some of the ships and the treasure they carried were discovered. On July 31, 1715, ships under the command of General Ubilla was caught by the storm on their road to the Americas and they crashed to the coral islands. The ships went down with 225 people. Only one ship from the 12 ships fleet were able to survive. The gold carried by the sunken ships was taken to the Spanish army located in Havana. A part of the treasure was discovered 250 years later after a long search.
The boats which plied between Manila, the capital city of present day Philippines, and Mexico's Acapulco port once a year from 1565 to 1815 were called Manila Galleon. These boats were the only transport and way of communication between Spain and its colony Philippines and the main livelihood of the Spaniards in Manila. During the heyday of trade with galleons, Manila became one of the biggest ports of the world and the centre of commerce between China and Europe. Chinese silk, which was the most important commercial good, fragrances, porcelain goods, Indian silk and precious gems were carried with galleons. The goods that were unloaded in Acapulco provided 100 or 300 percent profit. On their way back home, the galleons carried large amount of Mexican silver along with several missionaries, who were members of the church who carrying messages to Spain.

The Spaniards who lived in Manila so relied heavily on these ships that came once a year so much that the economy of the colony fell apart when these ships sank or captured by British pirates on their way. On the other hand, this trade negatively affected the Philippines's economy. Almost the entire Spanish capital were used for speculation of Chinese goods. After other countries began to trade directly with China, the importance of galleon trade declined at the end of the 18th century.

In the 18th century, the Spain increased their control over sea routes and entitled other countries to trade between Spanish and American ports. As the monopoly in the trade between Spain and its colonies was removed, the fleets lost their significance in time. The expeditions of galleons were terminated in 1740 while the expeditions of the fleets were ended in 1789.

The U.S. became the new Western rival of Spain which gave up after struggling with the Ottomans in East. The Spaniards were driven out from the Northern America sometimes by war sometimes by peace, and sometimes by offering money. The Spanish armada in Philippines was beaten by American forces in 1898 and the Philippines became an American colony. The U.S. became one of the most powerful sea forces in the world. Spain lost its colonies in the central and southern Americas one by one. However, they created a huge nation who speaks Spanish, lives according to the Spanish culture and is linked to Madrid subconsciously.