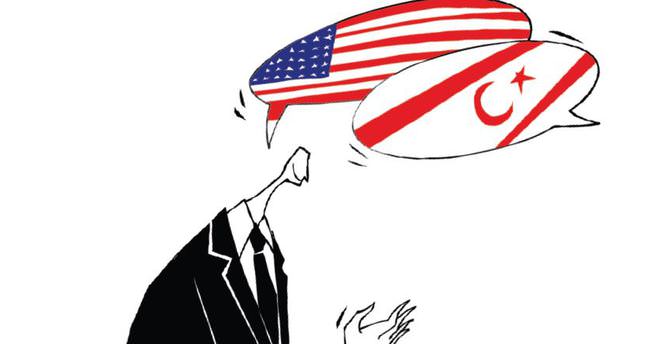 Biden's visit to Cyprus is a good example of the US' dexterity and efficiency in a bipolar world. The US vice president went to the Turkish side to meet Eroğlu, a revolutionary step that caused immense tension on the Greek side. However, his plane landed at Larnaca airport and his visit to the Turkish side did not include the presidential palace, but instead an adjoining building

U.S. Vice President Joe Biden has made an important trip to the divided island of the Mediterranean, Cyprus. This is a first visit by such a high-ranking representative of the U.S. administration since the historic visit of Lyndon B. Johnson, in 1962, when he was vice president to John F. Kennedy.

It is obvious that the new energy extracting and distribution system has definitely focused the attention of both the EU and U.S. on this tiny and almost forgotten island, where never-ending negotiations for unification sporadically come to the agenda, to create new disappointments before disappearing afterwards.

This bizarre situation of a de facto partition to be overcome by mutual agreement of both Greek and Turkish sides has continued since 1974, when a coup d'état was staged by the Greek military junta to attach the island to mainland Greece causing the Turkish military intervention which durably divided the island into two separate entities, living side by side, but having almost no relations.

The Greek side, internationally recognised as the sole representative of the Cypriot Republic, has taken this advantage to try to dictate a solution that would sound and look like the status quo ante, where the Greek majority had an institutionally advantageous position as compared to the Turkish minority; whereas on the Turkish Cypriot side, a solution and a subsequent reunification of the island was never really expected, the solution would be a loose confederation, bi-zonal and bi-communal, based on political equality.

Throughout the 1990's, important political crises emerged between Greece, Turkey and the Greek part of the island. Especially, the decision taken by the Greek administration to install S-300 Soviet missile batteries on its territory, manned by Russian military advisers which provoked a harsh reaction on the part of Turkish Government and the Premier at that time, Ms Ciller, who openly threatened to destroy the arms if they were to be installed. This major crisis came to an end when Greece accepted to host these batteries in Crete, where for the last 20 years they remain forgotten and useless.

The Turkish stance of "no solution is also a solution" was widely shared on the Greek side so long as the Turkish Northern Cypriot Republic was not internationally recognised. In 2002, that way of thinking ended.

Turkish Cypriots largely started to refuse a situation with no future and Turkey has undergone a deep change concerning its policies. An important opening could have been made in 2002, where the EU would decide which side was faulty concerning the reunification negotiations.

Rauf Denktaş, the eternal and powerful president of the Turkish Cypriot Community since 1960's, never really wanted a solution, but without the backing of the conservative/nationalist bloc within the Turkish Ministry of Foreign Affairs, he would not be able to torpedo the talks under U.N. auspices. The newly-elected AK Party government had to face a difficult fait accompli, when the Turkish side was shown as the main culprit for the demise of negotiations.

That was the turning point in Cyprus, giving the Greek side an enormous advantage, EU membership.

Once the membership promise was given, there were no other incentives for Greek Cypriots to accept the Annan Plan, the only full-fledged system to bring durable peace and stability on the island. The plan was largely accepted by the Cypriot Turks and largely rejected by the Cypriot Greeks. No international retaliation measure was exercised on the Greek administration in the aftermath for two reasons: Firstly, Greece, a member state of the EU since 1981, had threatened to block any enlargement of the EU towards Eastern Europe if Cyprus was ostracised; secondly, the Russian Federation, with all the financial interests vested in the island, had blocked the works of the U.N. Security Council, to deliberate about Annan Plan's fate, using its veto right.

A number of hesitant openings by EU have been made to ease the embargo on the Turkish part of Cyprus; all of them have been successfully blocked by Greek Cypriot authorities.

The EU, taking advantage of the asymmetrical situation of Turkey, in accession negotiations since 2005, has tried to impose normalisation of some transport facilities for Greek Cypriot ships and planes by Turkey.

The situation, that was decaying, has all of a sudden changed. Major international players started to push harder for a solution in Cyprus, starting with the U.S., whose reluctance to get directly involved in this conflict seems to have disappeared almost by magic. How could one explain the reversal of this situation?

Firstly, by the new developments regarding the energy perspective: Israel is likely to become an important energy producer, within the existing situation of the Middle East, the only solution to extract, liquefy and transport the Israeli natural gas is to establish a web of pipelines and liquefaction installations together with Cyprus and Turkey. But there is a second development, less visible than the first one, albeit more profound and interesting.

Since the demise of the Soviet Union, the U.S. was seen as the sole superpower in the new world order. Well, the new world order under the guidance of the "sole superpower" did not work. U.S. tentative openings for comprehensive international cooperation have not been successful, and hazardous military operations have shown not only the limits of the U.S. military superpower, but also its diplomatic inability to secure a worldwide peace and cooperation. Perhaps no superpower could ever be able to carry out such a task; in the meantime, the U.S. has been not only unsuccessful internationally but also lost most of its democratic image due to war atrocities.
This is changing: Russia has gone back to its politics of the Soviet era, China is the rising star and most of the Asian non-democratic countries have come together in Shanghai Cooperation Association, deciding not to destabilise each other, in a mood that reminds the meeting of Mafia padrones in the Godfather movies.

The bipolar world is mostly back, with noticeable differences especially in terms of ideologies, however the system is definitely back since the terrible situation in Ukraine and Putin's last visit to China.

In a bipolar world, the U.S. performs with dexterity and efficiency. The visit by Biden to Cyprus is a good example. The Vice President went to the Turkish side to meet Derviş Eroğlu, a revolutionary step, that caused immense tension on the Greek side, However his plane landed in Larnaca airport and his visit to the Turkish side did not include the Presidential Palace, but an adjoining building.

Barely a threat to the Greek authorities but on the other hand, Turkey was dealt a nasty surprise when the Court of Human Rights issued a huge fine of about $90 million, stemming from the damages caused by the Turkish military operation in Cyprus.

This ruling came totally unexpectedly, reminding Turkey that the measures required to make Turkish Cypriots and Turkey's government unhappy are many. In Cyprus, messages seem to have reached their objective:

Both sides will see each other at the level of presidents every fortnight, to come up with a rapid solution. Turkey's Minister of Foreign Affairs Ahmet Davutoğlu did not try to hide his satisfaction after Biden's visit (which will be followed by John Kerry's visit), especially after the surprise of the Human Rights Court's ruling.

The Greek side seems to be less joyful, especially when they are openly reminded that their financial honeymoon with Russian oligarchs' money has come to an end. To remind them that the US are very serious about their initiative, a "private" jet, belonging to British Airways carrying the legendary rock group Deep Purple has landed on the "illegal" airport Ercan, on the Turkish side of Nicosia. A coincidence? Surely...