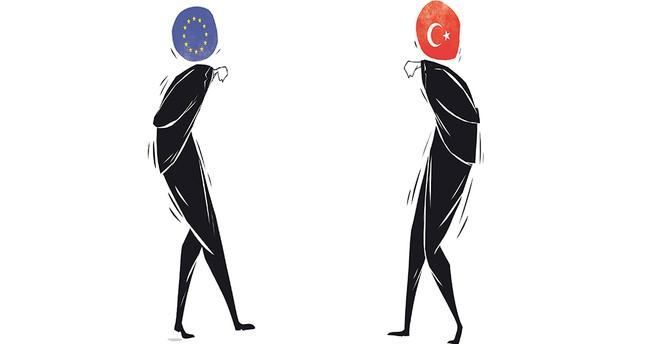 by Emre Gönen Oct 10, 2014 12:00 am
After the members that came from the Supreme Court and the Council of State were finalized, 10 more members will be elected among the first ranking judges and prosecutors for the Supreme Board of Judges and Prosecutors (HSYK) tomorrow. In terms of democracy, it is critical to what extent this board, consisting of 22 members, will be pluralist. Because the HSYK is the only institution authorized to open investigations against and penalize members of the judiciary aside from its authorities for promotion and appointment.

Since the early Republican period, the HSYK served as a tool of the official state ideology and guaranteed military and bureaucratic domination in the country. In other words, the board was designed as an ideological resistance force against legislation. The 2010 referendum was an attempt to normalize this structure and turn it into a more pluralist one but it did not succeed since the Republican People's Party (CHP) brought the issue to the Constitutional Court by claiming that the member electing mechanism was anti-democratic. And the Court agreed with them. The result was domination of the group that received the largest amount of the vote over the HSYK, and thus the Gülen Movement gained disproportionate force within the institution.

The incidents experienced within the last three years have displayed again what could be if the HSYK does not have a democratic and pluralist structure. We saw that the ideological and political law cases were always assigned to the same judges and prosecutors and some of the cases were even suspended to be assigned to certain judges and prosecutors. We also witnessed that many complaints filed against judicial members were suspended, investigations were not opened against those affiliated with the Gülen Movement and the few investigations that were opened against Gülenists were prevented from being finalized.

The following election is a chance to break this monopolistic structure. But it is also required to end the HSYK's role of being an arena for political struggle. The government adopted a correct strategy with respect to this. It did not constrain the makeup of the judicial institution by nominating only the names close to them against the Gülen Movement. Instead, it promoted the formation of a coalition on the basis of representation of different groups from social democrats to nationalists. Various political tendencies will likely coexist for the first time in the HSYK as a result of the next elections and appointments and the balance between them will realize the dispositions that will exemplify fair decisions and merit.

This development means passing a critical threshold in terms of democracy, because so far the HSYK has existed as a representative of a mindset that is completely against the principle of the state of law. Those dominating the board appointed the ones closer to their own political tendencies to all the critical positions and thus they politicized the organization. So, the formation of impartiality was prevented through personnel policy. But the greatest harm was making judicial independence irrational. The judges and prosecutors, who know that their professional careers depend on ingratiating themselves with the HSYK, became the followers of the ideological and political tendencies in the HSYK and showed an effort to present themselves accordingly. As a result judicial independence only remained an unaccomplished principle on paper. The higher judicial bodies that are independent from the government did not want their judges to be independent while dispensing justice.

If the jurisdiction is experiencing a crisis of legitimacy today, those founding this system and presenting it under the guise of a "state of law" in order to make use of it are the ones responsible for the system. That is the reason why the acts of the Justice and Development Party (AK Party) that might be regarded as intervention in the judiciary do not cause a stir, but rather are supported by society. It is obvious that a regime in which the judiciary regards itself as a political actor, an opponent of the government and resists pluralism cannot be called democracy.