Israel and the Armenian tragedy 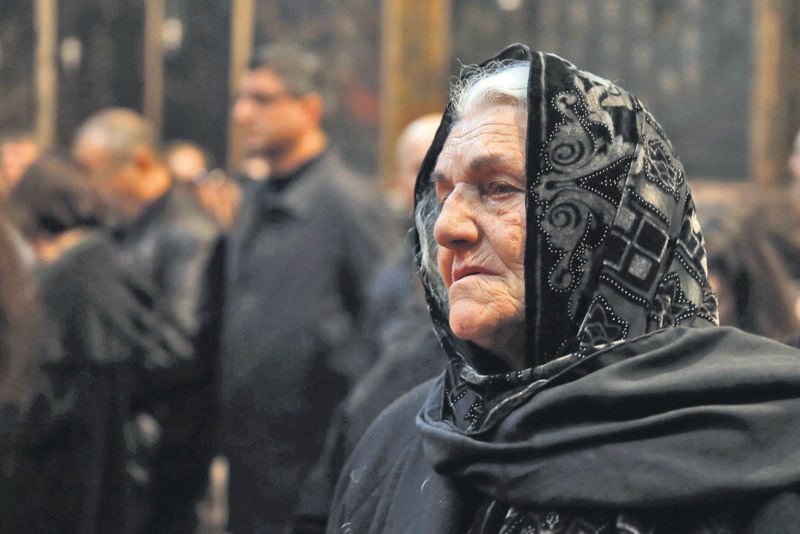 A member of the Armenian community attends a special at the Armenian St. James Cathedral in Jerusalem's Old City, to commemorate the 1915 incidents.
by Emre Gönen Apr 28, 2015 12:00 am

Israel has consistently refused to officially recognize the 1915 incidents as genocide, albeit with all Israeli officials strongly condemning the Armenian massacres and showing their sympathy

The centenary of what is widely called the Armenian genocide has inspired a huge number of articles and declarations in the international media. Everyone was expecting, some anxiously and some hopefully, that this time, U.S. President Barack Obama would at last refer to the events as genocide. This did not happen, although he said everything but the word itself, to underline that the "Metz Yeghern" (Great Calamity) was a terrible and genocidal act.

The fact that the U.S. continuously refuses to use the term genocide at the administration level can be and is being explained by the unwillingness of the U.S. to open the way for individual claims of compensation and durably to alter Turkish-American relations. This analysis remains acceptable so long as the U.S. remains the real superpower in the world, in the face of more and more trouble dictating a "Pax Americana" in a continuously expanding and globalized world.

There is continuous pressure on the U.S. administration to recognize, or at least to say the word genocide, which has yielded no results up until now. The fact that the U.S. administrative system remains extremely federal is also a handy factor for the U.S. president to keep his usual stance on the subject. At the state level, the Armenian tragedy is referred to as genocide in a number of cases, and local politicians and representatives can easily accept the term without having to impose it at the level of the federal government.

For Israel, the situation is altogether different. Together with the U.S. and the U.K., Israel remains one of the main countries overtly resisting the use of the term genocide regarding 1915. There has been immense pressure on different Israeli governments to accept the "Metz Yeghern" as genocide. More and more Israeli intellectuals and politicians together with other Jewish decision-makers and elites around the world are voicing their concern about Israel remaining silent on the Armenian genocide issue.

Israel has consistently refused to officially recognize the 1915 incidents as genocide, albeit with all Israeli officials strongly condemning the Armenian massacres and showing their sympathy. Now this attitude of Israel (still refusing to call the "Metz Yeghern" genocide), is explained with two different analyses in the international media. The first and most visible explanation is the relations between Israel and Turkey. The latter was one of the first countries to recognize the state of Israel in 1948 and for decades, the relationship was very close. So, according to the first analysis, Israel does not want to further spoil its relations with Turkey, already in shambles since the Mavi Marmara flotilla incidents and Gaza bombings.

The second and more sophisticated analysis points out to Israel's relations not with Turkey, but with Azerbaijan. Arad Nir has written extensively about this approach in Al-Monitor. Foreign trade between the two countries has blossomed during recent years, and Israel purchases 40 percent of its oil from Azerbaijan, which in turn buys sophisticated weaponry from Israel, and their common perceived threat remains Iran. So it is not at all a good time for Israel to recognize the Armenian tragedy as genocide and provoke the ire of the Azerbaijanis who experienced the Khojaly Massacre committed by Armenian forces in 1992, when hundreds of civilians were slaughtered.

The reality of any situation is usually a little deeper than geopolitical and tactical stances and calculations. The legitimacy of the state of Israel is based upon the fact that the "Shoah" (Hebrew for catastrophe, in reference to the Holocaust) was committed, wiping out half of the Jewish population from Europe. This legitimacy was so strong that it served and still serves as recognition by the international community that Jews have the right to live in a state. The alternative has been the first Palestinian and Arab positions to destroy Israel once and for all. This has become an obsolete stance in most Arab countries and even among Palestinians. Still, Iran does still not explicitly recognize Israel's right to exist within internationally-accepted frontiers.

Israel cannot weaken the legitimacy conferred by the Holocaust by "downgrading" it to the same level of other genocidal events and happenings of the 20th century, most importantly to the level of the Armenian tragedy. It would deeply undermine the uniqueness of the Holocaust and ultimately might give credit to Holocaust denier policies. Israel cannot afford to take any chance on this. Perhaps an analysis based on this assumption can give a better idea about Israel's so-called transience.
RELATED TOPICS