Special envoy Rubinstein's diaries, or how to find a solution in Syria? 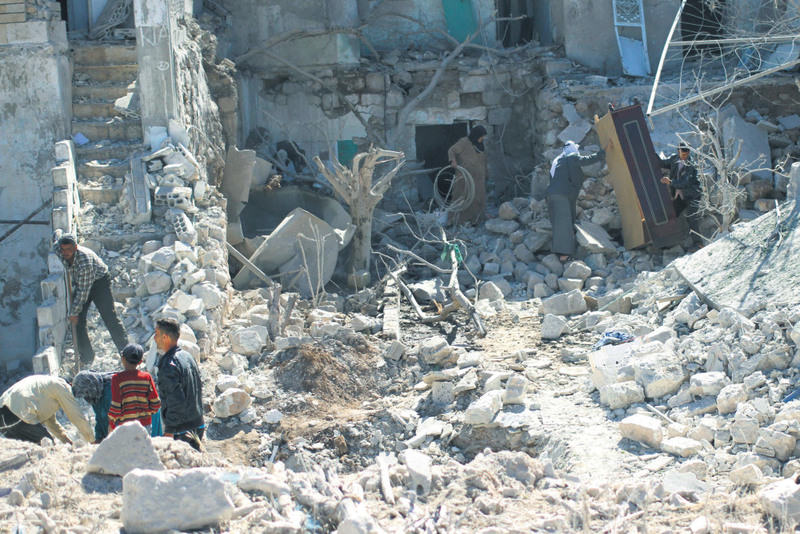 Residents search for belongings amidst rubble at a site hit by what activists said were barrel bombs dropped by forces loyal to Syria's President Bashar Assad in Ain Larouz village in the Jabal al-Zawiya region of Idlib province.
by Emre Gönen May 26, 2015 12:00 am

The U.S. has finallyrealized that the Assad regime is the source of the instability in Syria and a solution in the country involving Assad is not a viable option

State Department representative, special envoy for Syria and very experienced diplomat Daniel Rubinstein visited Turkey last week and held meetings with his Turkish officials. His trip, which started in Geneva, continued to Moscow, where Rubinstein met representatives from the Russian Ministry of Foreign Affairs, including Deputy Minister of Foreign Affairs Mikhail Bogdanov. His trip will include Saudi Arabia after Turkey, where Rubinstein is saying "in between the lines" what roughly the U.S. State Department stance is for a solution to the Syrian tragedy. I have already had the opportunity for a brief meeting with Rubinstein, but as the meeting was "on the record" he was extremely attentive not to say anything that could be considered speculation. His views were simple and straightforward. First and foremost, the U.S. will not put up a military solution for Syria, including its own military. This does not mean that air support cannot be extended for supported armed movements, but it would be limited to this only.

Secondly, Syrian President Bashar Assad has no future in Syria. No solution including Assad will be accepted. This part is very clear. What remains unclear is whether the Baath Party, or what is left of it, will also be banned. There is definitely no hint at all that the U.S. will want a wide "de-nazification" type of sacking in Syria, as Paul Bremer did in Iraq back in 2003. Syria, very much like Iraq, has been living under the authority of a single party and a single type of highly centralized administration for decades. After the demise of the Iraqi Baathists and the Iraqi army, there was virtually no competent alternative authority to replace them. This has created a very long period of "establishing a viable administrative capacity and network," which still has not given any promising result. The U.S. will certainly not commit the same error and would like to keep at least some of the infrastructure from the Assad regime in those people not directly involved in the killings. The Russians have probably loved the idea of keeping some of their friends from the Baath Party in the administration, which they probably see as a guarantee to keep their military naval base in Tartus. This is perhaps why, after having met Rubinstein, Russian authorities have been heralding buoyantly that there would be no solution without Assad and that the U.S. has at last come to understand it. Their way to negotiate a deal, which ultimately puts Assad on the bench but not his administration nor his Alawite elite, might need such an exuberant distortion of the deal, but will not change the fact that Assad will have no role to play in the future of Syria.

According to Rubinstein, Assad's continued presence atop the Syrian regime is exacerbating sectarianism and extremism not only in Syria, but also in the region as whole. This shows that the U.S.'s first and foremost target to establish a semblance of peace in the regions will be the removal of Assad first and the Islamic State of Iraq and al-Sham (ISIS) and all the other terrorist organizations right afterward. Without removing Assad from leadership of the Baath Party and what is left of the Syrian army, there will be no perspective to offer to the part of the society and armed forces that have remained loyal to Assad. They have been remaining loyal mainly because of the fear of what could happen if the status quo is destroyed. In view of what really has happened, their fears have proved to be very mild compared to reality. So the "elite" of the Syrian armed forces and population need a viable and hopeful solution to fight ISIS and to make a deal with the anti-Assad movements, mainly the Syrian National Council and Free Syrian Army.

So the non-military solution of the U.S. will be in fact to neutralize and calm Russia's apprehensions for the post-Assad period by removing Assad probably through a palace coup, but maintaining his camp. In doing so, a platform can be formed where the Syrian National Council and the new "reconverted" Baath Party members could forge a deal within the parameters of Geneva Communique. Such a coalition could put up a viable alternative and army to fight and defeat ISIS and other terror organizations. From the Iraqi side, there is already a large war waged, and mostly lost, by the new Iraqi army against ISIS. The Iraqi forces that have been united under a joint command recently will need the opening of a second front from Syria to effectively combat ISIS.

Turkey's already accepted approach to train and equip the Free Syrian Army will be implemented, but will only be effective if there is a much larger front encompassing the remains of the Syrian army. What remains unknown in this equation is the situation of Iran, which reiterates at every level its support for Assad. How would the Iranians want a deal? Their position for negotiations is very weak in the long term, but strong in the short term regarding their military support for the fighting factions.

When I asked the question of how to deal with Iran, Rubinstein smiled and answered that it would be totally speculative to give an answer within the parameters of my question. In a way, this whole article is speculation, but I fail to see how the U.S. approach can be translated otherwise. Already, seeing the Russian and Turkish reactions to Rubinstein's proposals, one can affirm that this is brilliant diplomacy, giving every party an argument to be satisfied.
RELATED TOPICS