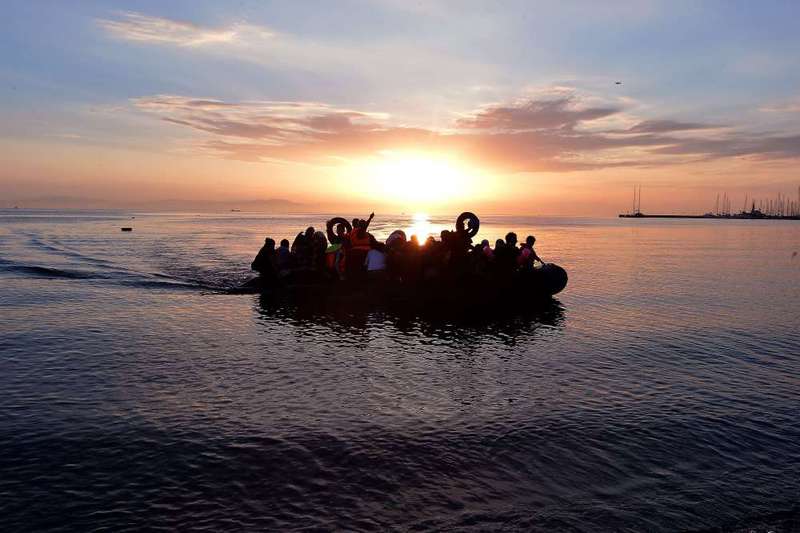 A dinghy overcrowded with Syrian refugees approaches a beach on the Greek island of Kos after crossing a part of the Aegean Sea from Turkey to Greece.
by Emre Gönen Aug 18, 2015 12:00 am

The Syrian refugee crisis is spreading not just among its neighbors but toward Europe, especially Greece. Therefore, a global collaboration is urgently needed to solve the problem

There is an ever increasing flow of illegal migrants moving toward the Greek island Kos in the Aegean. The island is small, beautiful and remained very peaceful until very recently. Incidentally, this was the native land of the famous Hippocrates, and more recently, a prominent figure of early Republican politics in Turkey, Şükrü Kaya, Mustafa Kemal Atatürk's man of confidence who served uninterruptedly for 11 years as Interior Minister between 1927 and 1938. Today, the entire population of the island does not exceed 33,000, and Kos is located only 4 kilometers off the Turkish coast.

Just opposite Kos on the Turkish coast lies Bodrum, the top Turkish holiday resort. Today it is home to a significant number of Syrian refugees who live side by side with holidaymakers and vacationers from all over Turkey and Europe. After having hoped for over three years that the situation in Syria would somehow calm down and they could go back home, most of the Syrian refugees have henceforth only one aim to leave Turkey for a European country where they will ask for political asylum. The illegal passing to Greek border is not very dangerous as it is only 4 kilometers away from Bodrum. There is always a boatman who will offer them passage to Kos for an exorbitant fee that the poor refugees are willing to pay.

So we are witness to a terrible and farcical situation where the Greek coast guard and the Turkish land and sea authorities are almost powerless in the face of the huge number of refugees arriving on Kos and waiting in very precarious conditions to be sent to mainland Greece where their demand for asylum will be examined. The Greek authorities are overwhelmed by the situation, trying to push back illegal migrants forcibly when they can, and trying to host the remaining refugees already in Greece in very difficult conditions. On the Turkish side, there are 2 million Syrian refugees. Perhaps 15 percent live in refugee camps in good conditions praised by all international agencies and independent observers, where their existence, health care and education are secure. But more than 1.7 million refugees live outside of these camps, which, by the way, are supposed to be transitional. Out of these hundreds of thousands of people, many are attracted by the perspective of a new life in Europe. Most of them have relatives or parents living in Europe already.

The Turkish legislation against human trafficking is perhaps not dissuasive or deterrent enough. Even if the legislative instruments are adequate, their implementation remains questionable. Up until a few years ago, the Turkish penal array for preventing illegal passage to foreign countries was totally inadequate. Trespassing over a border illegally was a felony, but to attempt to trespass was not considered a crime, but a misdemeanor. So in fact the crime was committed once the refugee was already in the neighboring country', where Turkish jurisdiction is not applicable. Such biases have now been corrected through harmonization works with the EU acquis communautaire. But there is evidently an absence of motivation by national administrations to deal with the refugee issue alone.

This is not new; the whole 20th century has been marked by the perambulating unwanted refugee influxes from one country to another, especially during the two world wars. We still live in an international environment structured by different nation-states. And there lies the real problem - no nation-state today is sufficiently strong, powerful or willing enough to deal with the refugee problem. Turkey has had the political will to leave its Syrian border open and to manage a huge humanitarian operation. But this incredible stance has almost been totally forgotten, and now the attention of the whole international public is focused on the tragedy of the migrants on the small island of Kos.

Şükrü Kaya, who was a native of Kos (İstanköy in Turkish), was a pure product of the nation-state nomenclature under the Ottoman administration. He was in charge of the "displaced people" in 1915 in the district of Aleppo where he supervised the faith of the masses of exiled Armenians. Hopefully, authorities in Turkey do not treat the displaced people the way the Ottoman Empire did back in 1915. Still, this is not enough for what is happening all around Turkey. There is a vital need to coordinate the problem of migration first with EU countries, and mostly Greece, but NATO countries should also be involved in order to tackle this huge issue.
Last Update: Aug 18, 2015 2:09 am
RELATED TOPICS