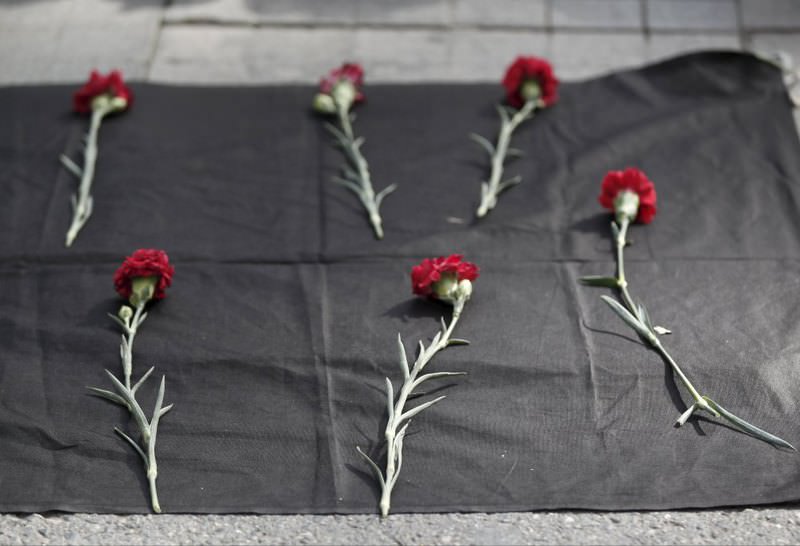 Carnations are seen placed on the ground during a protest against the latest terrorist attacks in Ankara.
by Emre Gönen
Oct 12, 2015 12:00 am

The latest suicide bombings in Ankara, in other words the capacities and capabilities of terrorist organizations have once again shown that the international community needs to take an active role in the fight against terrorism by backing Turkey

A terrible bombing happened in the capital city Ankara. The information is still scattered and very incomplete, but apparently two suicide bombers attacked a massive manifestation for peace, killing at least 95 people and injuring hundreds more. The location of the terrorist attack was almost at the heart of the Turkish political administration. It was only 1 kilometer away from Parliament, main ministries, the General Quarter of the Armed Forces walking distance from the Presidential Palace and last, but certainly not least, a little more than a kilometer from Anıtkabir, Atatürk's mausoleum.

The two blasts were so powerful that the bodies of the people who lost their lives can barely be identified; it will take some time to perform DNA testing to establish their identities. It all happened just in front of the main Ankara train station, a place where people were gathering before marching to Sıhhiye Square, one of the main squares in Ankara. This is basically the tradition for public marches, a little like the trajectory between Place de la République and Place de la Bastille in Paris where all the marches and similar manifestations take place. Why this whole explanation? Because the security forces knew perfectly where these people would get together and what their marching direction would be. The march was legal, authorized by the Ankara Prefect and enough police were already at the site. So how can one explain the total ineptitude of the police who let the suicide bombers in uncontrolled? Police in Turkey normally are very keen to control everyone at all times before and during any manifestation involving the Kurdish political movement and the Turkish left.

The last time Ankara has seen such a massacre was in 1402 against the armies of Tamerlane, who devastated the Ottoman army. The city symbolizes the nascent Republic of Turkey and takes great pride in being the cradle of the new Turkey after the terrible demise and dislocation of the Ottoman Empire. It is obvious that the security forces are not anymore able to safeguard the "sanctum sanctorum" of the Republic. This is a very, very alarming development.

A second issue is also the incredible clumsiness and ineptitude of the three ministers who organized a press conference just after the massacre. To a question about whether he would contemplate resigning after such a massacre, Interior Minister Selami Altınok responded with a blunt answer that he saw no breach in the security system after the attack, while Justice Minister Kenan İpek sitting next to him had a grim smile on his face.

The government Turkey has is a first of its kind, this is an "elections government," nominated, but not having received a vote of confidence in Parliament. It is basically a technical staff in charge of safely taking Turkey to new elections. Obviously they are not up to their task. Prime Minister Ahmet Davutoğlu is overwhelmed with the tension and pressure. Parliament is not really functioning as the deputies are all on election campaign. The presidency can hardly have any executive power in application for such issues, according to the Constitution. So there is a void for the first time since the Justice and Development Party (AK Party) came to power.A third and very alarming issue is the fact that Turkey today has turned into a free playground for an incredible number of foreign secret services, terror organizations and international crime associations. When the government decided to implement and pursue an open border policy to save the lives of millions of Syrians, Iraqis and several minority groups, it staged a great demonstration of its soft power. But the frozen relations with the EU and the condescension and disdain barely hidden by NATO allies of Turkey have not allowed the implementation of an international cooperation worthy of its objective. Only now have the U.S. and EU come to understand how dreadfully wrong it was to leave Turkey alone. They are probably changing their stance. The Turkish political elite will, at least some of them, realize how tense and dangerous it is to ignite dissention in society. But it will be too late for those who died for wanting peace here and now.
Last Update: Oct 12, 2015 2:08 am