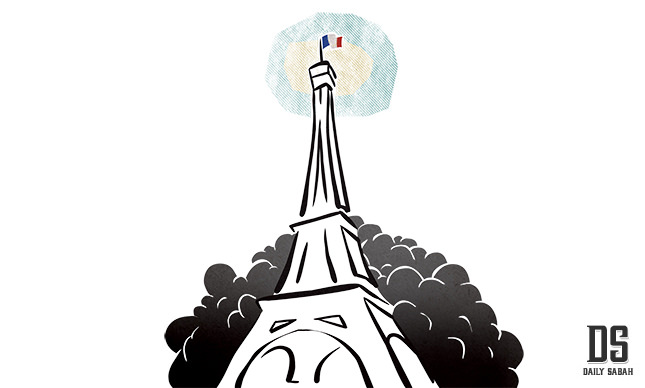 We are at a point in time when all words fail. We now need to put aside all political, economic and strategic criticism and share in Paris's sorrow

There is a beautiful French saying: "Paris sera toujours Paris," Paris will always be Paris, meaning that the city will always keep its luster as the center of liberal thought, freedom of expression and speech. Starting from the Great French Revolution, Paris has been a symbol of liberty in the eyes of all oppressed intellectuals, revolutionaries, writers, poets and composers all around the world. Anyone who was oppressed in their own country would like to take refuge in Paris. Over decades, Paris hosted the most brilliant and creative minds from around the world. From Spain, from Latin America, from Iran, from Africa, from Eastern Europe, there has been steady, continuous migration of the most creative thinkers, writers, artists and philosophers to Paris. Not to France, but Paris. People who were not oppressed at all in their own town or country would still go to Paris to fulfil their aims, to attain their plenitude. Vincent Van Gogh or Samuel Beckett among many others went to Paris to feel liberated from ossified artistic references.

Paris, through this continuous, virtuous intellectual inundation, has been able to produce ideas, principles and artistic beauty for the last 200 years at least. It was the capital of the greatest medieval kingdom in Europe, after the revolution it became the world center of arts, liberty and freedom of expression. Not that French society was totally receptive to such transformations. It remained a rather conservative and inward looking society. But Paris was there to change the tune always, all the time, with great vista.I was a young university student at the Sorbonne, when we started a campaign for the anti-apartheid South African poet Breyten Breytenbach, who was detained in his country for political reasons. I do not remember how many protest campaigns I participated in, but I definitely remember very clearly this one, because a number of months after we started the campaign, I was walking uphill on the crowded Boulevard Saint-Michel toward the university when I saw a young man in a green overcoat with a white scarf. I looked more attentively, it was Breyten Breytenbach himself. The one we were campaigning to free. After being liberated, he immediately came to Paris. I did not have the courage to greet him, but I remember that was a very happy day.

Paris remains still the prime tourist destination in the world, as it exercises a very peculiar attraction. We can hardly say that it still remains as the center of such a huge intellectual pool, but it is still perceived as such.

The terrible, pitiless massacre that took place in Paris is unfortunately only one of too many. Recently in Ankara, Beirut and Suruç similar inhuman assaults have taken place, killing hundreds of innocent people. They did not deserve to die any more than the 129 people who were massacred in Paris.

Obviously, democratic states should have taken much bolder and much firmer steps long ago to try to prevent and control this terrible escalation. Obviously, people killed in Beirut, Gaza, Kenya or Nigeria deserve as much compassion as civilians in France. But it is obvious also that the war with terrorism has attained another degree with the savage assault in Paris. The symbol has been targeted in a very cool-blooded, professional way, and the result has been alarmingly, terribly efficient.

The world is growing smaller and smaller. There is no possibility for underdeveloped countries, as they are called, to match the military might and organization of developed countries. There is no real military apparatus they can fight back. Colonialism is long gone. There are no colonial armies, no possibility to fight against an invading foreign army, like the Boers, like the Cipayes did or Ethiopians did. National liberation movements have been successful all over the world. This did not heal any of the open wounds. Palestinians still live like pariahs, scattered all over the Middle East, or even at home in the West Bank or Gaza Strip. Africa is still in shambles. There are places in the world that powerful democratic countries, the U.S. first, have decided not to touch. Stateless regions are numerous and nothing, or close to nothing, is being done to help the peoples of such sorry parts of the world. Since the 1967 Six-Day War, there has been international terrorism in the world, targeting mainly civilians, to fight against dominant powers.

Unlike during the bipolar world, information is largely shared concerning the fate of these places and people. Most of the time the information is biased or incomplete, but it is still information and data perambulating around the world on social media in an incredibly short span of time. This does not really help the societies of these regions to be better helped, but they are at least known. And this inability to do anything tangible to shake up the realpolitik of big powers, consisting basically upon not doing anything, is the main source of hatred and heinous feelings among people who feel close to these far, distant populations.

This is globalization, everyone lives everywhere. Colonialism brought large numbers of people from their homelands to places all over in the world. Local African populations have no possibility to organize terrorist attacks in Europe, but Europeans of Middle Eastern or African origin, living nicely integrated in European societies can. That was the case in the London bombings, and this is probably the case in Paris. People who committed these atrocities speak English or French without accents and are citizens of these countries.

Pope Francis very pathetically declared that "[T]he road of violence and hatred does not resolve humanity's problems. And using the name of God to justify this road is blasphemy." He is so right and so to the point yet again. But this was exactly the method used by the "democratic coalition" to wage war first in Afghanistan and then in Iraq to take revenge for the 9/11 attacks. Finding a suitable scapegoat to molesting has never done anything other than creating more intricate, deeper problems. This is what happened in Paris. Unlike in Ankara or Suruç, the people targeted were not participating in any particular political event. They were just enjoying the start of the weekend in restaurants and at concerts. DAESH hit a very delicate fiber. There are no military or security measures to prevent such atrocities from happening. We, every one of us, have to think about changing our methods once and for all and stop believing that in the security of well-guarded borders, we remain safe, even if the rest of the world is in a dire situation.

Paris is the most sacred symbol of our vision of the future. The atrocities committed challenge our vision of the world, our way of living and our way of being. There should be no mistake about it; there are no scapegoats to chase after. The whole perception of international relations is at stake. Somebody wrote that we will be in need a lot, an amazing lot of love (amour) to overcome Paris. That is beautifully said. We also need much more love and empathy to find the correct solution. This is also obvious.
Last Update: Nov 17, 2015 6:36 pm