Elections in Spain: A new era of unexpected political formations 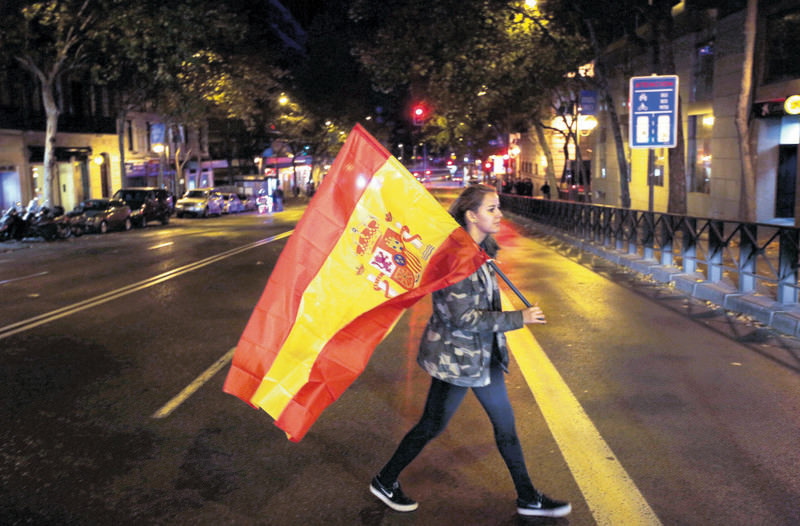 A supporter of the Popular Party carries a Spanish flag as she leaves the party headquarters in Madrid on Sunday.
by Emre Gönen Dec 22, 2015 12:00 am

Receiving the majority of the votes in the Sunday elections has made the People's Party come first, yet the win was not enough to bring the party to power alone

Elections for the Spanish Parliament, the Cortes, took place on Sunday. Again, opinion polls were not that successful in predicting the correct outcome. Still, the political scene in Spain has been totally overhauled, and will very likely continue for some time to come.

Against all expectations, the Partido Popular, the great conservative party, came first in terms of votes cast and number of seats won. It received 28.7 percent of the vote and 123 seats out of the 350 in parliament. The second political force is still the Spanish Socialist Worker's Party (PSOE) with its most dreadful results since its foundation in 1978 with 22 percent of the vote and 90 seats in parliament, down from 110 in the previous Parliament. The third and fourth parties are the newcomers: Podemos, which was established only a couple of years ago, is the third force and the very newly established liberal Ciudadanos, mainly supported by civil society, is fourth with 20.7 percent of the vote and 69 seats and 13.9 percent and 40 seats, respectively.

This shows the end of the bipartisan structure of Spanish domestic policies in place since 1978. It would be immensely difficult for Spanish political parties to form a majority in parliament. To this new and difficult situation is the issue of independence in Catalonia.

What is more striking about these election results is that the Spanish political establishment was not unsuccessful trying to get the Spanish economy out of the terrible turmoil that happened in 2010. Unlike Greece, and to some degree Portugal, Spanish political leaders - either former Prime Minister Jose Luis Rodriguez Zapatero with the socialist government or Prime Minister Mariano Rajoy with his conservative government - have taken the austerity measures seriously and have implemented them even deeper and swifter than asked by their creditors. The result is that the Spanish economy - the fourth biggest economy of the eurozone - saw 3.2 percent growth in 2015 and unemployment, skyrocketing at 50 percent after the crisis in 2010, has been brought down to 21 percent this year.But the price of the recovery has been the casualization of jobs and a severe setback in living standards. The conventional political parties response to the crisis and the neo-liberal solutions offered are not to the taste of everyone. As such, there is an important movement toward establishing new political structures that question neo-liberalism and are likely to offer new solutions. A very strange parallel between Greece and Spain appears. In Greece, no conventional political movement has been able to offer good governance out of the crisis and they have been replaced by new parties, most visibly Syriza. In Spain, the way out of the crisis has been diligently managed by both dominant parties, but both still lost at least a third of their traditional voters.This is probably the beginning of a new era in which the main social and economic references will change. Economic growth is mainly based on the production of yesterday's industrial outputs, but all of them are probably unfit to survive the environmental standards of tomorrow. Economic growth does not bring any distributive justice anyway, and the electorate does not cast votes by looking at stock exchange market references.

Conventional policymaking is disappearing, and it is disappearing much faster than expected. This is a general trend that every political movement in every developed and democratic country should take very seriously. Whether a political party is successful in implementing traditional liberal or social policies does not guarantee any longevity anymore. For the traditional political parties that have not been able to tune up their rhetoric and strategies to today's needs and take pride in recalling achievements of long gone "golden eras," the future looks even gloomier.
RELATED TOPICS