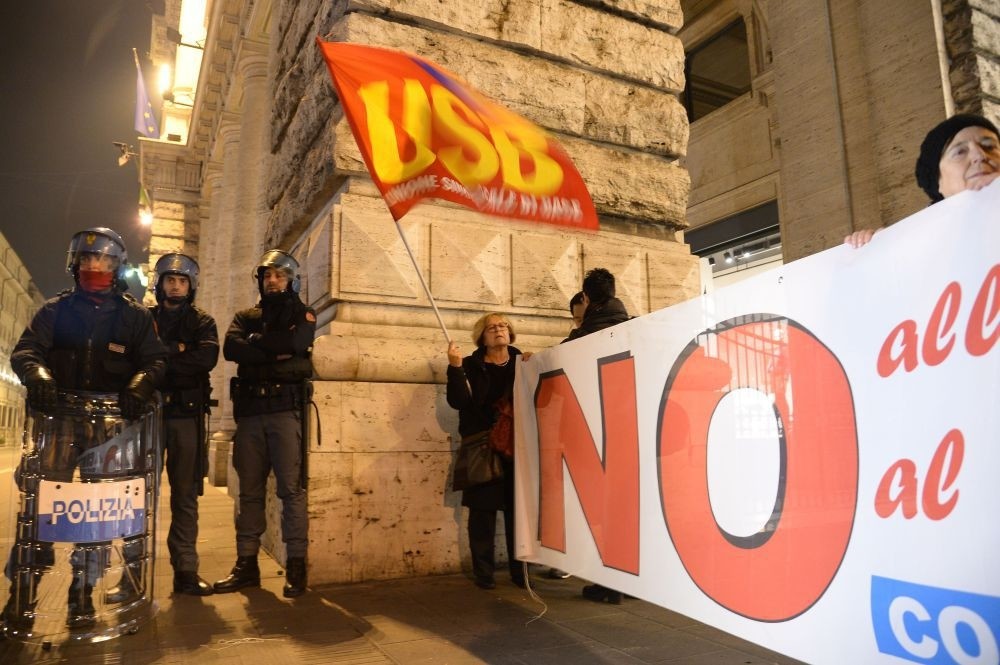 Policemen standing guard as the ,NO, voters in the constitutional referendum celebrate near the Palazzo Chigi after the end of the vote in Rome, Dec. 4, 2016.
by Emre Gönen Dec 06, 2016 12:00 am

The presidential elections in Austria gave a clear victory to the old and surprisingly "anti-establishment" candidate Alexander van der Bellen. This "remake" of the second round of the presidential elections did not bode well at all for the latter, so long as he won the previous (cancelled) elections with the narrowest of the margins. The challenger, a pure product of the Central European fascistic right, Norbert Hofer, was seen as a very possible winner by most of the polls just before the elections. Well, he lost, and by a distance. He conceded victory to van der Bellen just after the declaration of the first results.

Not only is this is a very healthy reaction on the part of the Austrian voters not to have chosen Hofer, but it should also be underlined that the old and sympathetic van der Bellen conducted an unashamedly pro-European campaign. President van der Bellen declared after the proclamation of his obvious victory that "From the beginning, I fought and argued for a pro-European Austria. I would think it a big mistake to promote the drifting apart of the EU."

At a time when politicians of very different obedience and political families try to get votes by accusing the EU of all sorts of evil, it is somehow refreshing to see a wise old man professing "anti-populist" ideas to win an electoral contest.

Already, a number of analysts have pointed to the fact that this victory against the rise of the fascistic far-right should be seen as an exception rather than the reversal of a deep-rooted dynamic. It will take much more than a surprise victory to revive the ideals of European integration and to stop the rise of the extreme-right, but two important consequences should also be drawn.

First, this is (again) a surprising victory of an anti-establishment candidate. This shows us the depth and the magnitude of certain populations' unhappiness with the conventional political elite. Secondly, an exception can be life-saving for an entire society. In 1936, when all the countries in Europe (and in most of the world) were contemplating the rise of fascism, exacerbated by the terribly inept management of the 1929 crisis, among other shortcomings, France had an "exception." The 1936 parliamentary elections gave an unexpected victory to the left wing parties union, the Front Populaire, led by a very atypical politician: A socialist and a Jew, an intellectual and republican, Léon Blum, who remained (and remains) one of the outstanding politicians and statesmen in French history.

Not only did the victory of the Front Populaire very efficiently stop the rise of fascism in France, but it has also opened the door to very important social developments, like the first paid holidays for workers. It showed a plausible and peaceful alternative to the hyper-populist fascist forces. France lost out in World War Two very badly, at the beginning, losing its influence over the developments of the war afterwards. This is why the pre-war period is largely forgotten. But important events that stopped the rise of fascism should always be remembered.

Italy has gone, on the other hand, into expected turmoil. Once again, an intricate popular referendum turned into a vote of confidence for the government, and the governing party lost against a populist and xenophobic movement. Matteo Renzi wanted to reform once and for all the Italian electoral and representative system, which currently doesn't provide enough stability for governing parties. Italy decided to establish a "perfect bicameralism" in the aftermath of WW2, because nobody wanted to remember the fascist period and Mussolini's one-man-rule. Going from one extreme to the other, the Italian senate and parliament were put on an almost equal footing, rendering virtually impossible a sustainable political majority in both chambers. As a result, 63 governments have seen the light of day in 70 years. Renzi wanted to change it, by proposing a new election system, the Italicum, which he proposed to a popular referendum and got it accepted. The second step was to make out of the senate a symbolic regional consultative body, with only 100 seats and unpaid mandates for senators. This was the proposal rejected by a clear majority on Sunday.

Now this shows how dangerous and versatile popular referenda can become, when it comes to restructuring an ailing electoral system step by step. The "No" vote pushed Matteo Renzi toward an early political retirement, while giving the hyper-populist "Five Stars" movement of Beppe Grillo new and unexpected perspectives for early elections.

The last thing Italy needed was political turmoil, and this is what Italy, in all probability, will get. Each step the EU takes shows how fed up the population is and how afraid and anxious they are and the lack of trust in the system and the "establishment." Even if you want to shake up the established rules, like Renzi tried to do, the mere fact of looking "pro-establishment" can be enough to lose an election or referendum. Such an analysis should be taken very seriously by every political movement in Europe and afar.