A very difficult period for Turkey in international relations 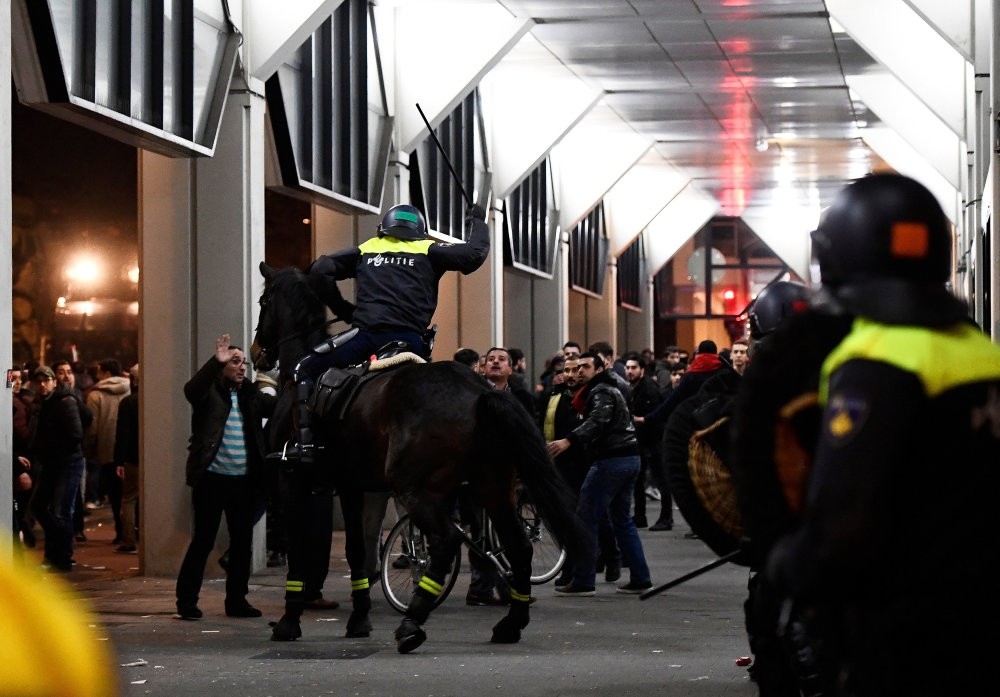 A Dutch mounted police officer raises a truncheon during protests against police treatment of a minister,preventing her from addressing people in front of Turkish Consulate in Rotterdam,which led to a diplomatic crisis between Turkey & Netherlands.
by Emre Gönen Jul 12, 2017 12:00 am

The European Parliament took the decision to ask the Council of Ministers of the EU to stop the accession negotiations with Turkey, on the grounds that Turkey is no longer fulfilling the first Copenhagen criterion pertaining to democratic functioning. This very blunt decision came after a number of other mishaps in international relations. The autonomous Venice Commission of the Council of Europe first declared, before the Constitutional referendum, that the project of the constitution prepared by the Turkish government was not in line with the principle of separation of powers. Then the Parliamentary Assembly of the Council of Europe decided to place Turkey in the category of countries whose democratic functioning is under scrutiny.

For the record, Turkey is a founding member of the Council of Europe, alongside nine other countries, and our present Foreign Minister Mevlüt Çavuşoğlu has been the first Turkish Parliamentarian ever elected to the presidency of the Parliamentary Assembly of the latter council.

Effects of the Cyprus issue

Despite these deep and traditional relations with European international institutions, Turkish governance has been very severely challenged on the international level for the last few months. The referendum held in Turkey has given way to a critical assessment on the part of the OSCE Office for Democratic Institutions and Human Rights (ODIHR) for the first time since 1983.

Recent inter-communal talks in Cyprus, despite the important hopes it has created, have seen yet another failure, perhaps for good this time. The Greek Cypriot leader Nicos Anastasiades walked away from the negotiation table, but it is more than likely that the failure of the negotiations will be seen as sabotage from the Turkish Cypriot delegation and Turkey. The article by Giorgos Pantagias, published in the Greek Cypriot daily Politis, is only the first sign of such an approach.

More perhaps seriously, the relations between Turkey and Austria have turned into a very un-diplomatic pugilistic exchange of mutual accusations. Economy Minister Nihat Zeybekçi notified that his presence was not sought over the territory of Austria, where he was planning to hold a meeting to commemorate the popular resistance to the military coup attempt of July 15 together with the Turkish population living in Austria.

This new problem occurred after the infamous developments in the Netherlands and very recently in Germany, during the G20 meeting, when President Erdoğan was asked not to hold any meetings with Turks living in Germany. He probably brought this issue to the agenda, when holding a bilateral meeting with Chancellor Angela Merkel, if we take into consideration that afterward she declared, "deep-going divergences still existed" among the two leaders.

The only semblance of success happened in Syria, where the cease-fire brokered by Russia, Turkey and Iran is being largely implemented. However, in view of the war in both Mosul and Raqqa, this development has gone largely unnoticed among the international mass media. Anyhow, before a sustainable peace is enforced in both Syria and Iraq, nobody can really talk about "success" in these countries.

The situation of Qatar is another source of apprehension. The coalition led by Saudi Arabia, comprising of the United Arab Emirates, Bahrain and Egypt, has been taking an extremely aggressive stance against this tiny but very rich and developed Gulf state. This is the consequence of recent political upheaval in the Saudi kingdom; the new governance is based on becoming a hard power in the region. It has badly backfired in Yemen, where ill-prepared air raids on the part of Saudi aviation have mainly killed the civilian population without really gaining any ground. The attempt to ostracize Qatar has been another failure, and the Turkish government very openly supported Qatar by establishing an air bridge to overcome the blockade imposed upon the latter by the Saudi-led coalition. It seems that the expected tour of the Gulf countries by President Erdoğan can open up the way to some negotiated solution of the crisis, but we are now in very bad terms with Saudi Arabia, for probably the first time since the Justice and Development Party (AK Party) came to power.

The Trump administration created a deep cloud of misunderstanding between the U.S. and the rest of the Western alliance, including Turkey. The changing mood and attitude of U.S. President Donald Trump has caught everyone in Europe and elsewhere off balance, but Turkey has been deeply concerned by the heavy armament delivered by the U.S. to the Democratic Union Forces (PYD), seemingly to help them fight Daesh in Raqqa. This is the first time the U.S. is giving officially arms to an organization whose links with the outlawed PKK are a secret to no one. This has happened in spite of numerous and repeated warnings on the part of the Turkish authorities.

Briefly, our external relations are in a very bad period. Not only is there deep mistrust among our conventional allies and us, but also relations are totally out of hand in the EU countries. Openly, Turkish representatives of the government are targeted as unwanted visitors. This is again a first since the coup d'état of 1980.

The repercussions of these external problems on domestic politics are not very detrimental in the short term. There is latent but very powerful anti-Western sentiment among the population, virtually among any non-Western population because of colonialism, imperialistic policies and the two world wars that assassinated so many hopes all around the world. The diatribes against Western leaders always find a more or less accommodating and supportive audience in the short-term, but they also consolidate the feeling that nothing has changed much since the 19th century imperial balances in international relations. In the longer term though, such an anti-Western attitude will be extremely nefarious to the Turkish economy.

Turkey's position in the EU

Well, much has changed and is changing since the end of the 19th century. We will have to play the international game by its rules, while acknowledging that Turkey has always been seen as the black sheep of the family. We will and we shall not give away our rights to sit at the negotiation table with the EU. We shall not take a step back in our relations with the Gulf countries. We shall not expect much from Russia, so long as the only tangible strategy of the Russian Federation is to divide as much as it is possible all alliances in Europe in order to create a climate resembling the 19th century imperial competition.

But first and foremost, we have to mend our ailing relations with the EU, starting with Germany, I already have had to amply dissert on this subject. In view of recent developments, a clear, rapid and tangible opening is sought rapidly in order to prevent things going totally out of hand, as in the case of Austria.