Dinosaurs have gone, the KKK remains 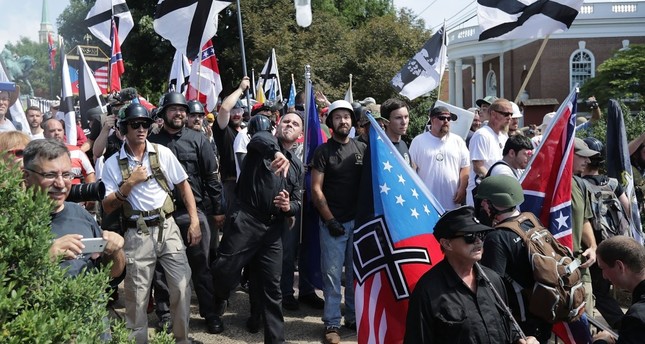 Hundreds of white nationalists, neo-Nazis, KKK and members of alt-right hurled water bottles back and forth against counter demonstrators on outskirts of Emancipation Park during Unite the Right rally earlier this month in Charlottesville, Virginia.

In normal times, racists are just a fringe minority who no one takes seriously, but unfortunately, seldom are times normal and all are advised to remain alert against encroachment by hate

A new wave of hatred and xenophobia has shown its hideous face in most countries around the world. Usually, a new wave of racism and hatred take new forms and names. Anti-Semitism is always a good refuge for fascists, but Islamophobia has replaced the former because of the presence of large and numerous Muslim minorities in developed and predominantly Christian countries. But what is quite amazing is the fact that old, rotten and totally fossilized fascist movements have reappeared in the U.S. The Ku Klux Klan, the mascaraed of fascism and white "supremacy," always dormant in the conservative rural areas of the U.S., has reappeared this time holding flags decorated with… swastikas.

Robert Merton, one of the geniuses who shaped modern American sociology, in his studies of African-American lynching in the southern states of America at the turn of the century, has stated that the killers were gathered among the lowest stratifications of the social structure, those who would see the "negro" as an economic competitor. With the abolition of slavery, the former African-American slave became a social and economic actor, challenging the unqualified "white" workforce on economic grounds.

One might think that this kind of segregation and racism made sense a century ago, and could have been explained through clever sociological theories. We have taken great pride, since the end of World War II, to wipe off any reference to racism regarding governance in democratic regimes.

Is it really so? Rampant "white supremacist" temptations should not be able to find such an easy way to disclose themselves and to find an accommodating ear at the highest level of the U.S. administration.

President Donald Trump, faithful to his extremely clumsy and radical way of reacting to developments, has almost placed on an equal footing the KKK proponents and the anti-fascist demonstrators, explaining that the wrongdoings were equally shared.

This has created an outcry on a huge scale, among different representatives of political forces, not least a sizeable number of Republicans. Secretary of State Rex Tillerson had to even declare, "The president spoke for himself and not in the name of fundamental American values." It is a bit too easy to downgrade the immense blunder from the U.S. president. However, the whole development goes far beyond an unfortunate declaration and some manifestations of dinosaur-looking racists.

A true "racist" is born so and would remain so for the rest of his or her days… This is the bad news. One cannot "educate" let alone change a true racist. The good news is that only a very tiny fringe of the human population, between 6 to 7 percent, are irrevocably racists. The immense majority is not, and in normal times, racist manifestations remain confined to a small number of misfit lunatics.

Times, on the other hand, are seldom "normal." This is the hazard: when conventional political forces are unable to offer solutions to existing crises, people who would normally not even listen to racist demagogy may turn their despair and anxiety into support for radical movements.

If the German Central Bank, in the wake of the big crisis of 1929, could have followed the example of the Bank of England and take the courage to implement massive devaluation, Adolf Hitler would have remained what he really was for the rest of his life: A lunatic loser known only to a couple of hundred other misfits.

Unfortunately, things developed differently. This caused the death of European civilization and incidentally 6 million Jews and 50 million other people all around the world. Such a tragic blunder happened because nobody at that time had evaluated the risk of racism to its real extent.

Today we know. We know how hatred, xenophobia, anti-Semitism, Islamophobia and racism turned into political doctrines and deemed "acceptable" by the public can lead to immense tragedies. Therefore, it is of the utmost importance, for any elected democratic government, not to show any lenience toward such movements and manifestations. Swastikas perambulating in American cities are a farce nobody could have imagined a decade ago. It is only a tiny beginning, nothing has been lost, but necessary measures, meaning all the necessary measures, must be taken without losing any time.