Erdoğan visits the Vatican, then Italy, but why now? 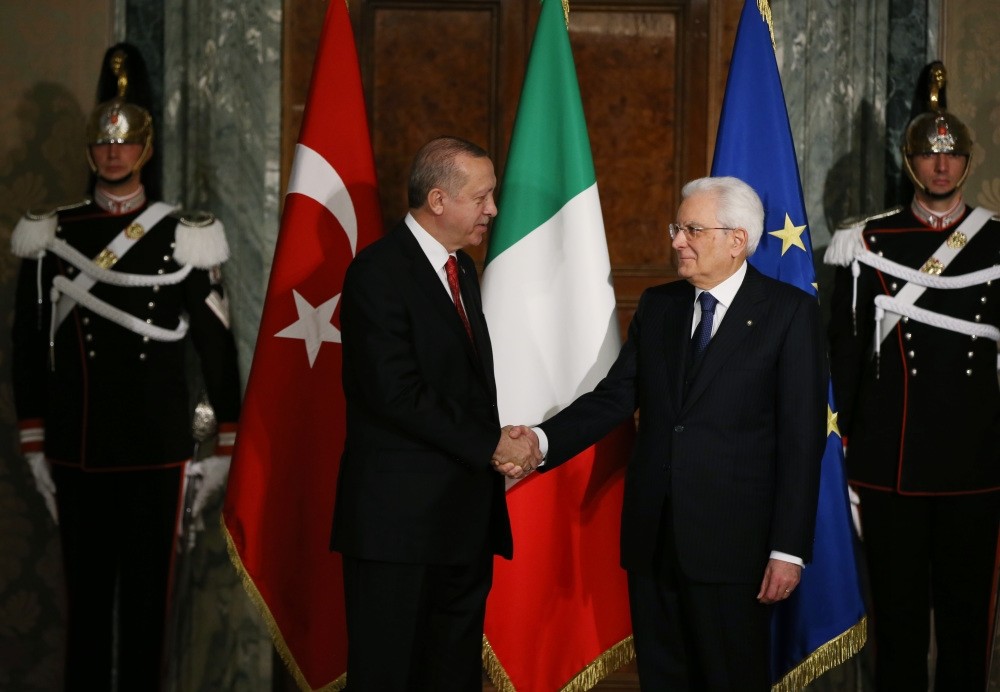 President Recep Tayyip Erdoğan is visiting Italy, more precisely the Holy See, in an official meeting with the pope. Recently, regarding the situation of the Rohingya Muslim minority in Myanmar especially, the president has seen the stance and intervention of the Vatican as very positive. At a time when all of Turkey's external relations have become deeply problematic with its European allies, at a time, when probably for the first time in history, Turkey is having a major scale embassy issue with the Netherlands, why would the head of state organize a trip to the Holy See?

The answer looks simple, as the two major instruments in Erdoğan's hands are, for the time being, the migration issue and the appurtenance of Turkey to NATO. As odd as it seems, there is a deep concern among the public and in the mass media in Europe regarding Turkey's commitment to NATO. The recent trouble with the U.S. regarding the military and logistic support extended to the terrorist People's Protection Units (YPG) by the latter has poisoned this issue. Declarations in Turkey pertaining to the unreliability of a major NATO partner has added to the confusion. In fact, neither NATO nor Turkey can seriously contemplate an amicable divorce unless there is a total reshaping of the world order. However, the situations in Iraq and Syria, increasingly brings up the question everyone seems to be thinking, i.e., what does the U.S. want to do in the Middle East? In this confused and intricate international situation, an exit from NATO on the part of Turkey can look plausible to a number of analysts. Erdoğan keeps the tension alive and uses it to consolidate his negotiation position. However, the real instrument Erdoğan has remains the issue of mass migration. The role of Turkey, with around 4 million of refugees mainly from Syria and Iraq, is a very important asset for Ankara in its talks with the European Union. Turkey uses this issue quite directly to underline its importance for the EU. After Erdoğan's visit to Paris, French President Emmanuel Macron has proposed, in principle, "another kind of partnership between Turkey and the EU," shutting down the already moribund accession negotiations and all hope to become a member.

Erdoğan's visit to Italy has given him the opportunity to bluntly brush aside such an offer. He declared that according to the principle of "pacta sunt servanda," the EU should honor its word. He has a point there. The meeting with the pope went well, and it was a long and cordial meeting after the official declaration, where the two parties examined the situation in the Middle East and the issue of Jerusalem. This probably means that Erdoğan did not miss the opportunity to mark some further points regarding the extremely clumsy and irritating move from U.S. President Donald Trump concerning the transfer of the U.S. Embassy from Tel-Aviv to Jerusalem. Pope Francis presented Erdoğan with a medallion representing an angel smiting a demon representing war. This probably was a very diplomatic way to affirm that the Holy See is against any kind of war, without creating uneasiness for Erdoğan.There is also the fact that Italy remains Ankara's most accommodating ally in the EU. If the next elections see the resurrection of Silvio Berlusconi, supported this time by the extreme right, the Lega Nord, Italy's relations with Turkey, already good, can become even more important for both parties.

Erdoğan's trip to the Vatican has shown two important developments. First, Turkey remains an irreplaceable partner in the region for the EU, be it for security or migration issues or the stability of the entire region. Secondly, there is a mutual need between Turkey and the EU, but all symbolism has vanished, no one thinks seriously that rapprochement in in sight. This can be seen as pure realpolitik, which is better than a conflictual situation. However, this is not a sustainable frame for both parties. The EU has started, slowly by decidedly, to try to implement a sui generis external policy on its own. Where Turkey fits in this policy will be the big debate to come.