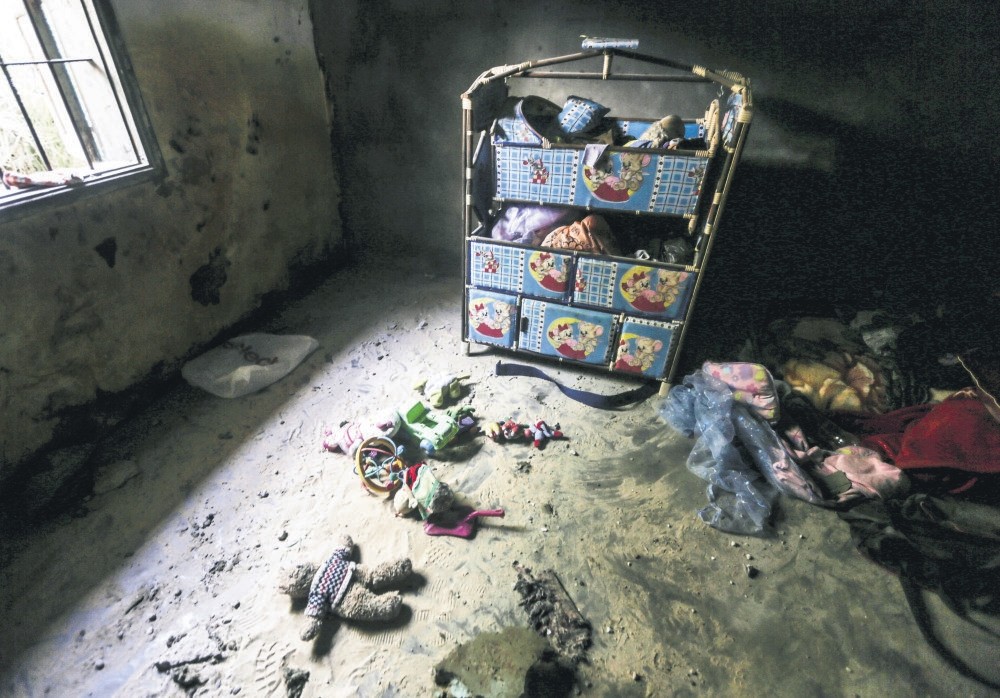 The house of a Palestinian family damaged during a brutal attack by Israeli forces during clashes with groups of Palestinian civilians protesting the Israeli blockade on Gaza, Deir al-Balah town, Gaza Strip, Aug. 9.
by Emre Gönen Aug 28, 2018 12:00 am

On July 28, a humanitarian aid flotilla trying to reach Gaza to deliver medicine to Gazan hospitals was boarded by the Israeli Navy 30 miles from territorial waters. The humanitarian activists were handcuffed, mistreated and taken into custody in the Israeli port of Ashdod. All their belongings and documents were confiscated as well as the medicine for the Gazan hospitals. The ships were also seized by Israeli authorities, who argued that the flotilla was in breach of the "legal" embargo against Gaza.

Nothing is surprising anymore considering the Mavi Marmara tragedy of 2010. Israeli authorities have resorted to sheer violence against anyone trying to send humanitarian aid to the Gaza Strip. As in the case of Mavi Marmara, the boarding and seizing of the humanitarian flotilla has been condemned as an "act of piracy" by most international analysts. Those defending the right of Israel to protect itself argue – alongside Israeli authorities – that any goods sent to Gaza without Israeli control can be used for military means, more specifically for the production of rockets to be used against Israelis.

A number of corrections should be made to this criteria. First, the Gaza blockade is not "legal" internationally. It has been condemned time and again since its inception in 2007 by both former United Nations Secretary-General Ban Ki-moon and current United Nations Secretary-General Antonio Guterres. Second, "private people for their private interests" according to the U.N. Law of the Sea treaty, can carry out an "act of piracy." This does not apply to the Israeli Navy. Attacking a civilian flotilla flying a Norwegian flag is an "act of war," a point reinforced by The Maghreb and Orient Courier in its last issue. The Mavi Marmara flotilla did not fly the Turkish flag, but the Norwegian flotilla did. The vessels were seized because "there was credible doubt that they would breach the Gaza blockade." Norway, which 10 years ago was the best mediator alongside Turkey for the Israeli-Palestinian conflict, was attacked by the Israeli Navy, just like Turkey.Will Israel suffer the consequences of this act? Certainly not. As a NATO member close to Israel, Norway is not expected to create much fuss about what occurred. However, because of the Gaza blockade, Israel has lost two major allies for solving the Palestinian problem: Norway and Turkey.

Does Israel really want to solve the Palestinian problem? Yes, but in its own way; namely through increased implementation of new settlements that render it impossible for a free Palestinian state on the West Bank of Jordan to emerge. Thus, Israel's reluctance to establish its own national borders once and for all. Concerning Gaza, its geographical situation and very limited area make the emergence of a separate state nearly impossible. As a result, the Palestinian problem is poised to end the way the Native American issue did in the U.S. nearly two centuries ago.

On the other hand, what does Hamas want for Gaza? It is not clear. Two million people are on the brink of despair and dementia. They lack everything. Younger generations cannot remember when electricity was available all the time. Currently, it is available two or three hours a day only. In retaliation, Hamas authorities have opted for the worst-case scenario. Their policies have resulted in innocent Palestinian – and occasionally Israeli – victims, nothing else. Rockets are being fired at the Israeli population, which result in massive retaliations from the Israeli Army and Air Force. Despite the fact that Hamas' rockets have not actually caused much physical damage, rather mostly affecting citizens' psychology, the air raids of Israel do. Usually, Gazan citizens fall victim to Israeli bombings, while the militants who fire the rockets are mostly well hidden underneath hospitals or rest houses. Consequently, there is growing hatred and thirst for revenge among the populations on both sides and as a result, hundreds of Palestinians have paid the price for every Israeli citizen wounded or killed. Sadly, this insane escalation of violence and hatred does not seem to bother Hamas.

In the coming centuries, if the human race does not bring about its own demise, historians will talk about the Palestinian problem the way we talk about the massacre of Cathars in Southern France in the 13th century or the Holocaust before and during World War II. Everyone saw it coming; no one did anything to stop it.