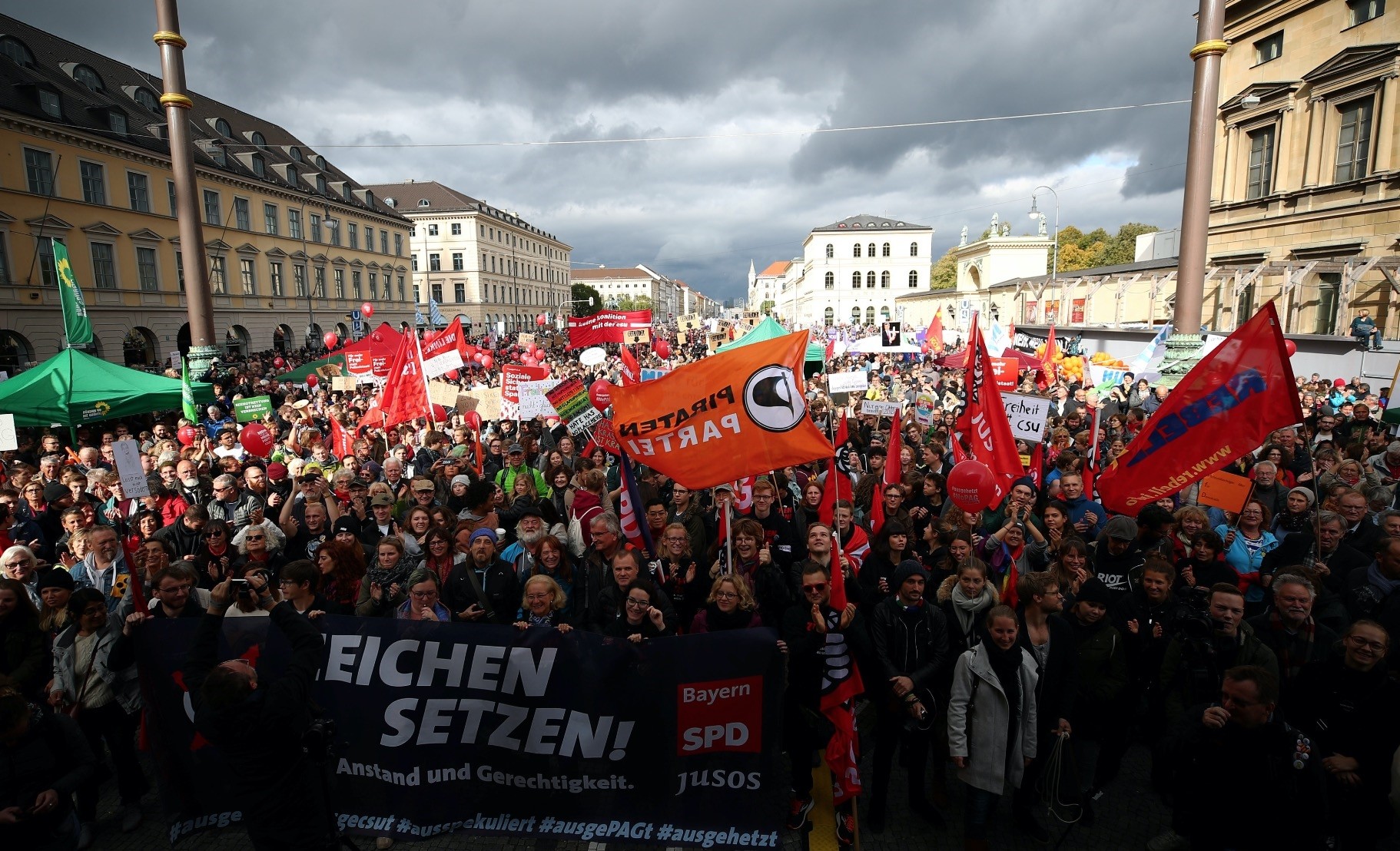 People gather to protest against populism, the trend increasingly associated with the political right and the use of hate speech, during a demonstration in Munich, Germany, Oct. 3.
by Emre Gönen Oct 09, 2018 12:00 am

Unfortunately the growing tendency toward nationalism and inward-looking political discourses is not simply a European problem. The Brazilian elections have recently seen an explosion in the popularity of extreme-right candidate Jair Bolsanaro, who was almost elected in the first round with an unexpected 46 percent of votes cast

U.K. Prime Minister Theresa May has overcome widespread civil strife in the Conservative Party through her performance at the conference in Birmingham. She consolidated herself as the leader of the party, reminding the delegates of the party's discipline, pragmatism and patriotism. "The Brexit sought by others, May suggested, may be more perfect than her plan, but only this version can guarantee that Britain will actually leave the EU at the end of March," wrote Austrian national daily Der Standard on the issue.

More than once, she used the term "confirm to our national interests," casting a dark shadow over what would have been achieved if Boris Johnson or an individual from the Labour Party dominated the government. So, age-old nationalism is used as both a justification and a threat. This is not new, but what is new is that this wave of nationalism, sprinkled with jingoism and anti-immigrant discourse, is hence called "populism."

It may not be new, but in the era of transition since the end of the Cold War remains extremely efficient. Great Britain is not the only country posing problems for the EU. Italy has been at odds with the European Commission over budget expenditures; Hungary, for the first time in EU history, has been officially threatened by the harshest measure to be taken against a member state; Poland remains the black sheep of the democratic family in the EU; Romania is organizing a referendum on whether or not to allow same-sex marriages, risking a bloc-wide debate.

Liviu Papadima wrote in Contributors.ro that: "By reducing the vote to a 'yes' or 'no,' the referendum is turning a sensitive and complex problem into a confrontation between two opposed 'camps': The pro-LGBT community and the anti-LGBT community. This is precisely what our politicians have done continuously for the past two years: Divide Romanian society. The fact that this referendum has managed to pitch religion against sexuality instead of handling them carefully – as philosopher Karl Popper recommends – fills me with horror. Do we celebrate if religion wins the battle against sexuality? Or vice versa? This is an irresponsible game in which I want no part."

Finally yet importantly, there are now serious concerns about a "rapprochement" between Latvia and the Russian federation. An article written by Vaira Vika-Freiberga in IR tries to convince everyone that no real threat is in sight, which probably suggests that there are more people fearing an antidemocratic turn than expected. She says: "Did any party say in the election campaign that Latvia should follow Britain's example and leave the EU? Did anyone say that we want out of the EU because all it has brought us is prostitution and graffiti? No, no one did. Did any party say that its first goal would be to exit NATO if it came to power? Of course not. And that is very important. Because in other countries there are parties that really do say such radical things. Thank God, there's nothing like that here. For that reason I would also not say that we're tottering on the edge of an abyss."

There is deep resentment among former socialist countries, now practically all the members of the EU, of "rich, wealthy and dominant Western Europe." Istvan Pataky wrote in Kronika that Eastern and Central Europeans are good EU citizens "as long as they reverently obey the guidelines set by the EU institutions, they are exemplary in their development."

These are only a few examples of a multitude. This nationalistic and inward-looking reaction does unfortunately not exist in Europe. Brazilian elections have witnessed the skyrocketing performance of extreme-right candidate Jair Bolsanaro, who was almost elected in the first round with an unexpected 46 percent of the votes cast. His main criticism of former Brazilian military juntas has been that, instead of torturing people, they should have killed them. That shows the kind of "populism" the world is under the influence of. It is superfluous to talk about U.S. President Donald Trump again; however, the Philippines' president, Rodrigo Duterte, is definitely no better than Bolsanaro.

There is no real "popular" ideology to oppose that kind of jingoism and authoritarianism. EU principles have been lost in a maelstrom of bureaucratic functioning; socialism as an idea does not translate into any captivating strategy or political movement yet, and liberalism is out of breath. It would be nice to know whether a strong political movement will appear to confront and contain the nationalistic wave.