Is a post-Merkel era on the horizon? 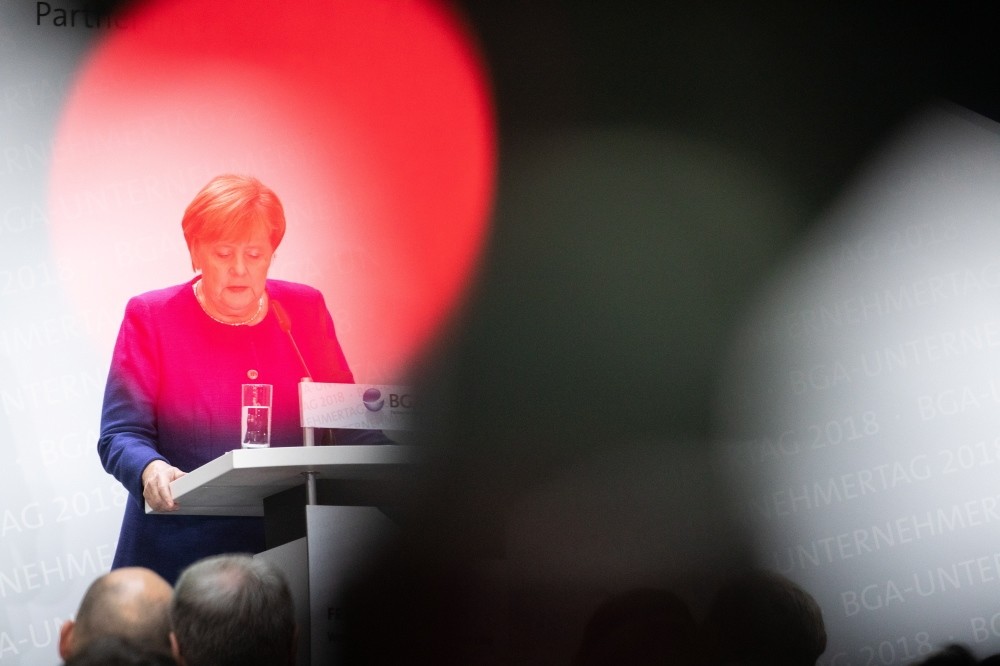 German Chancellor Angela Merkel speaks at an event organized by Federal Association of Wholesale, Foreign Trade and Services in Berlin, Oct. 15.
by Emre Gönen
Oct 17, 2018 12:00 am

A political crisis or uncertainty in Germany is very bad news for everyone, whether one likes Angela Merkel or not

Germany has a deeply federal administration that was not only inherited from the traditional regionalism and autonomy of German states and fiefdoms throughout history, but also imposed upon the nascent federal republic back in 1949. The victorious nations of World War II did not want to have a Germany with a strong central government, so it and Austria were asked to have strongly federal constitutions and administrative systems.

The republic of Germany has a very strong federal backbone, which did not prevent it from establishing a well-functioning, powerful central government. It remains one of the rare countries in the world where national and regional governance are able to cooperate successfully.

Regional, or state, elections are thus very important in Germany, not only at the regional level but also at the national level. They mostly serve as very dependable signals and gauges for the government in place.

Recently, the results of the Bavarian elections came as a wake-up call for the grand coalition in Berlin. The Christian Social Union (CSU), the Bavarian version of the big Christian Democratic Union (CDU), received 34 percent of the vote – its worst result ever. Voter turnout was 72.5 percent, significantly higher than 2013's 63.9 percent. This means moderate voters did not stay home, lending radical movements more representation. The elections saw the Social Democratic Party (SPD) lose half its votes, getting slightly less than 10 percent, and dropping from second to fifth place overall.

The winners were the Greens, doubling their score from 2013, with a respectable 17.8 percent, and the extreme-right Alternative for Deutschland party (AfD), which took 10.2 percent of the vote, giving it seats in Parliament for the first time. A euroskeptic center-right local movement called the Free Voters totaled less than 12 percent. They are poised to become the regional coalition partners for the CSU, without whose participation no regional government can be seriously considered.

Practically every party leader recognized the failure of the Grand Coalition between the CDU/CSU and the SPD in the election's results. The extreme-right has already asked for new elections to be organized and are heralding the replacement of German Chancellor Angela Merkel, calling for a "post-Merkel era." They may be mistaking their dreams for reality, but the extreme-right has never devoted much attention or respect to reality. What is more interesting is that the leadership of both the SPD and CDU think the coalition has been performing poorly and that things need to change. Will this lead to the anticipated national elections in Germany? That would be a stretch in a country where the culture of negotiating political solutions for political problems is deeply rooted. Then, how will the coalition parties induce change?

For the first time in decades, Europe is bearing witness to a Germany doubting its political future and its governance. It is worth remembering that the present grand coalition in power in Berlin was organized after all the other alternatives proved unfeasible. It proved impossible to gather the Free Democratic Party (FDP), a center-liberal party, with the Greens, under the leadership of Merkel's CDU. The Left party and the extreme-right AfD are not likely potential participants in a national coalition. That leaves four major political movements, the CDU/CSU, the SPD, the Greens and the FDP, for national governance. It is hard to envision what their common political ground could be, considering these movements have conflicting – or obscure – views regarding the most popular issue: Immigration.

A political crisis or uncertainty in Germany is very bad news for everyone, whether one likes Merkel or not. It also demonstrates to some German politicians, who are probably not ready to play such a vital and central role in the future of Europe, how dreadful the results of short-sighted anti-immigration stances can be.