What is wrong with the Orthodox Church? 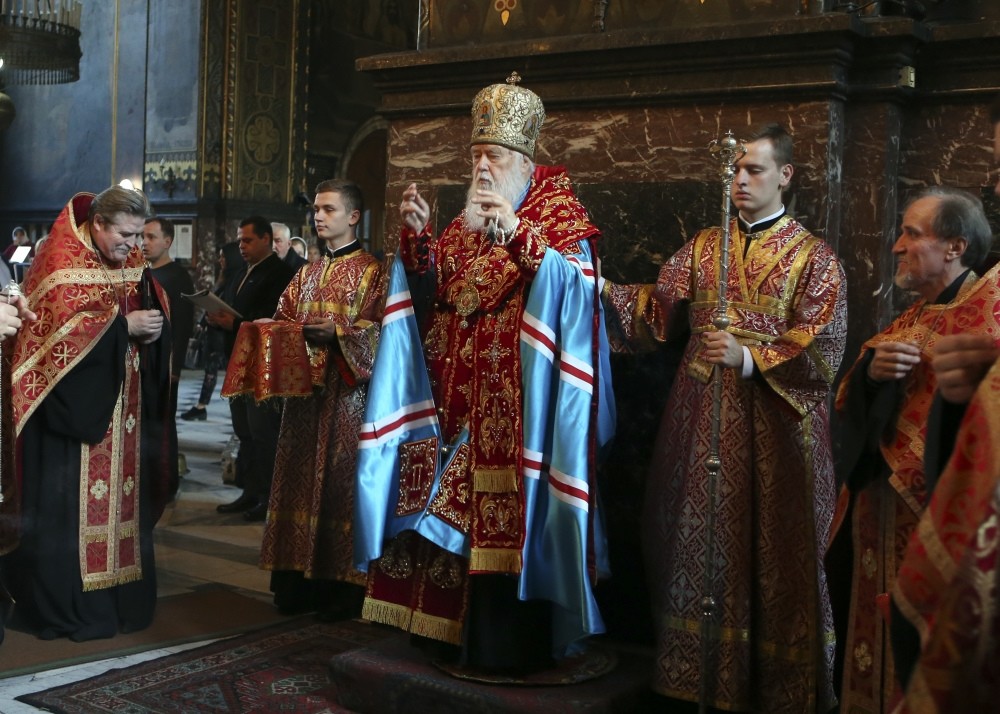 Patriarch Filaret, head of the Ukrainian Orthodox Church of the Kiev Patriarchate, conducts a service at the St. Volodymyr's Cathedral in Kiev, Ukraine, Oct. 11.
by Emre Gönen Oct 23, 2018 12:00 am

It is not easy for the layman to decipher the differences between the churches of the Christian faith. When, a fortnight ago, the Patriarch of Constantinople, Bartholomew, extended his support for an autonomous Ukrainian Orthodox Church (the term is autocephalous), he was challenged by a terrible outburst from the Moscow Orthodox Patriarchate, on whom the Ukrainian Patriarchate depends in some ways.

The Moscow Patriarchate was essentially accusing Patriarch Bartholomew of overstepping his authority by trying to grant "independence" to another patriarchate, whereas in orthodox churches such authority is bestowed upon the Orthodox Ecumenical Council. The decision in Istanbul was "illegal and canonically worthless," said Bishop Hilarion, representing the Moscow Patriarchate. He added "The Russian Orthodox Church does not accept these decisions, it will not follow them." A very blunt threat came alongside this protest, forbidding all clergy under the Moscow Patriarchate authority to have any ecumenical relations with the Patriarchate of Constantinople, including masses.

There are in fact three different orthodox churches in Ukraine, only one is attached to the Moscow Orthodox Patriarchate. This scission of the Ukrainian Orthodox Church has been seen as a political move by the Russian authorities, which explains their ire.

Out of the three major Christian churches, the Orthodox Church perhaps does not host the most in the community, but there are around 200 million of its devotees all over the world. The orthodoxy is mainly rooted in Russia and Eastern Europe.

The division with the Catholic Church dates back to the year 1054, when there was great schism after the Council of Nicaea. Out of the four major and strong churches of the time – Rome, Constantinople, Antioch and Alexandria – three condemned Rome's theology. Although it was more a gradual process than a sudden break, the rupture between Rome and Constantinople was in fact the division between the Latin speaking Western churches and the Greek speaking Eastern churches.

The pope, bishop of Rome, was rejected and the "orthodoxy" (the correct path) of the church was established. The seven Ecumenical Councils base the Orthodox Church on the authoritative interpretation of the scriptures.

Catholic and Orthodox churches remained without any formal relations for a thousand years, before the historic meeting between Pope Paulus VI and Ecumenical Patriarch Athenagoras in 1964.

It would be correct to say that the Catholic Church is centered upon the infallibility of the pope, the Protestant Church upon the Bible and the Orthodox Church upon the interpretation of scriptures. However, differences between Catholics and Orthodox are structural. First, the Catholic Church became, after the fall of the Western Roman Empire in 476 A.D., an independent, well-structured and rich organization. In the absence of a strong central power, the Catholic Church flourished by obtaining a monopoly of literacy, diplomacy and faith. It was able to collect taxes independently throughout feudalism and the Medieval Ages. It remained mostly the only body able to establish hospitals, hospices and seminars. The monastic system in Western Europe helped Catholicism establish total domination over intellectual life, over most financial networks and over communications.

The pope acquired temporal and secular power, with the Catholic Church highly centralized and hierarchically organized. Only after the Lutheran reformation was the Catholic Church challenged in its domination, however the counter-reformation and the extremely decentralized nature of the reformed Protestant Church helped Rome reconsolidate its authority. The totality of the 18th and 19th centuries is full of conflicts opposing the secular power of the Papacy against monarchies and nascent modern states.

On the other hand, the Orthodox Church never had the liberty of action of the Catholic Church, because it has always been under the authority of strong central powers, the Eastern Roman Empire and then the Russian Empire. The three major churches of Constantinople, Antioch and Alexandria were placed gradually under the authority of a non-Christian kingdom, the Ottoman Empire. Thus the Orthodox Church remained centralized, politically dependent and very poor as compared to the splendors of the Catholic Church.

It is worth noting that the Orthodox Church suffered more than any other church under different regimes. With the disappearance and dismemberment of the Ottoman Empire, huge populations of Anatolia were massacred or deported; there were numerous exchanges of populations at the beginning of the 20th century. So today, only tiny minorities live in the regions where the original churches were established.

With the Bolshevik Revolution in 1917, the Orthodox Church received the biggest blow; it was under extreme duress under an overtly atheist and anti-clerical regime. Its influence and organization in Russia and after World War II in Central and Western Europe was decreased to a minimum.Only after the demise of the Soviet Union and the disappearance of Soviet-type socialism did the Orthodox Church recover some of its ancient luster. The church in Ukraine has been under the jurisdiction of the Russian Orthodox Church since the late 1600s, but calls for independence have increased since Moscow's 2014 annexation of the Crimean Peninsula from Ukraine.

Orthodoxy has been consubstantial with modern nationalities, as in Greece or in Russia. Putin's advent gave the Russian Orthodox Church a new role in political affairs. It remains under the guidance of Putin's political authority, as was the case before the Bolshevik era. Still, why react so abruptly against the separation of the Ukrainian Church?

Vladimir Putin would like to assess Russian authority over the former Soviet sphere, in more sophisticated ways than the Soviets. He repeated many times that Russians and Ukrainians form a single nation, which is not to the taste of a majority of Ukrainians. The annexation of the Crimea and the de facto occupation of the Donbass area have been met with staunch resistance in Ukraine, strongly supported by two major EU powers, Germany and France.

It is not a military conflict; nobody is keen to wage war against the Russian Army or its auxiliaries on Ukrainian soil. Still, an embargo imposed upon Russia is deeply disturbing for Vladimir Putin. The new step toward pushing the Russian regime to a new corner came from a much-unexpected front, the Ecumenical Patriarchate of Constantinople.

Patriarch Bartholomew, usually very cautious in diplomatic affairs, is the Primus Inter Pares, the first among the equals concerning Orthodox Patriarchs. He still holds a huge moral authority among the clergy of this very decentralized Orthodox Church. The reaction of the Moscow Patriarchate is a textbook example of the political subjection of the Russian Orthodox Church. It has been ignited by another temporal, earthly political move on the part of the Ecumenical Patriarchate. Has there been some "advice" to the Ecumenical Patriarchate from EU circles? Was it only Christian solidarity shown to an autonomous church wanting to become autocephalous? We will probably not know as of yet, but this separation of the Ukrainian Church from Moscow owes a great deal to political disputes and has nothing to do with theological differences. It is also a slap in the face to the Russian regime, which does not bode well for the future.