A 'yellow vest uprising' in France? Then what? 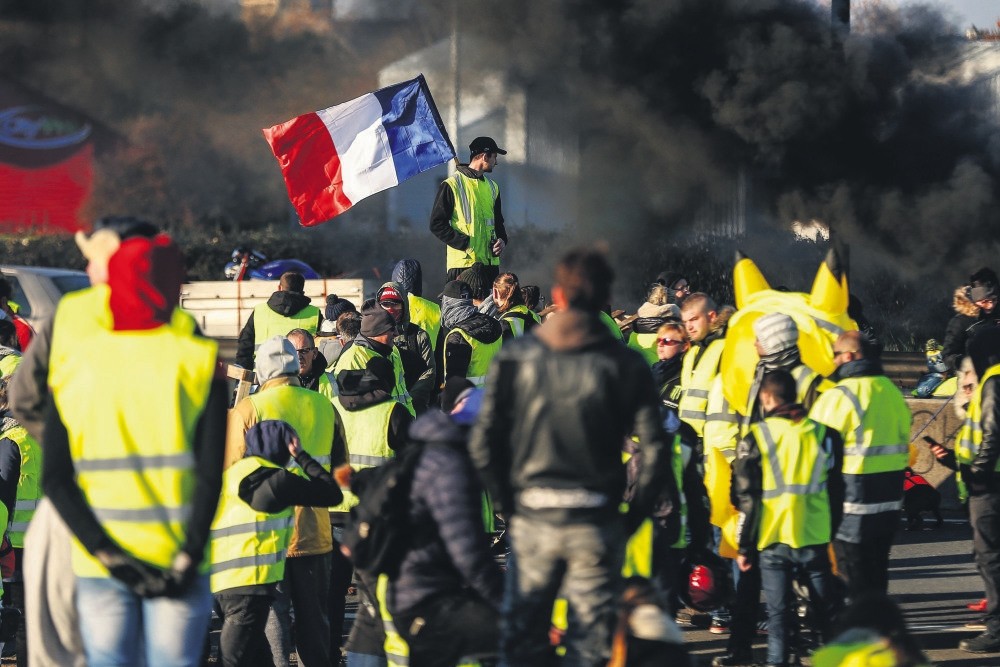 Whether the 'yellow vest' movement disappears after some time, or whether it turns into a political force, this appearance of a 'populist' protest movement does not bode well for France

France's history is full of unexpected popular uprisings against the ruling power. Medieval times saw the "Jacqueries" terrible peasant revolts, then the world famous French Revolution came, changing everything and ending the "Ancien Regime." The most recent huge popular uprising in French history remains May 1968; another historic juncture, that changed immensely the way of living and thinking in modern societies.Not that other countries are immune to unexpected popular manifestations. Nevertheless, when such protests happen in France, they attain paroxysmal dimensions and they make history. The "yellow vest" movement started very unexpectedly, via social media. The event that started the protests was an increase in gas prices. The French government, very much like other European governments, tries to dissuade car owners in using their cars and instead prefer public transportation. Therefore, there is an ever-growing excise duty on car gas.

People mostly living in far suburban areas or rural areas have felt ostracized by the new taxation policy and started a protest movement. Jacline Mouraud, an unknown Frenchwoman posted a video on Youtube, criticizing (politely) the vendetta of the government against car users. In no time, the video had gone viral and the movement acquired a surprising magnitude. On Saturday there were around 300,000 French people, in very different parts of the country, participating in the protest. Wearing the yellow vests, whose presence is legally obligatory for any car registered in France, the opponents started a "non-partisan movement," which was supposed to be non-violent. This is the first time such an event is happening without any political force or trade union behind the organization. The appraisal is rather sad, one dead and seven injured, one of them severely. A police officer was also injured at the end of the protests. Traffic jams have occurred in a variety of locations, but there have been no noticeable clashes between security forces and the protesters, because of the very passive attitude of the police, who have probably been ordered to stay calm. A few thousand irredentist protesters even came close to the Elysée Palace, creating turmoil.

The French authorities chose not to overplay the security issues, President Macron was in Germany and Prime Minister Philippe did not appear before the cameras, leaving the newly nominated Minister of Interior, Christophe Castaner, to be the spokesperson for the government. The latter loved his role under the limelight, but many questions remain unanswered.

Firstly, the taxation and subsequent price increase have mostly been offset by new measures taken by the government, not really creating a malfunction in the system. On the contrary, the measure can be seen almost as distributive justice, putting the weight on a solidarity effort concerning all the taxpayers. Still, it is a big flop: Average people are totally confused with Macron's clever readjusting of the taxes, offering rebates for some contributions, increasing in other parts. It is not easily understood, a simpler tax cut (I dare not say, but in a pure Trump style) can impress people. A sophisticated calculus where even the experts are not at ease does not create any positive influence over public opinion.

The second issue is more problematic: The yellow vest opposition does not have the support of any tangible political force or trade union. It represents what the French call a "ras-le-bol," meaning to be "sick and tired of."

The French are sick and tired of their political class as a whole and do not trust their trade unions. Whether the yellow vest movement disappears after a while (which is probable) or whether it turns into a political force (improbable), this appearance of a "populist" movement does not bode well for France.

France is not Italy, the Front National, with its nonexistent economic and social policies, can funnel some of the population's discontent, but no one will give Marine Le Pen the governance of France. There is probably no danger of seeing a movement as the Five-Stars Movement, so long as the populist vote remains in the hands of the extreme right. The center-right has been occupied by President Macron's policy, and the conservative-right does not know what to do, oscillating between extreme nationalism and social liberalism. The Socialist Party tries to survive, by carving a socialist space within the center-left. The France Insoumise (Mélenchon) and a variety of other smaller political movements have conquered the place occupied by the French Communist Party at the far-left for decades. The Greens never become a sustainable government party, and this turmoil can give populism an "anti-parliamentarian" aspect. Such a tendency already existed in the 1930s and its resurrection would be very bad news for everybody.