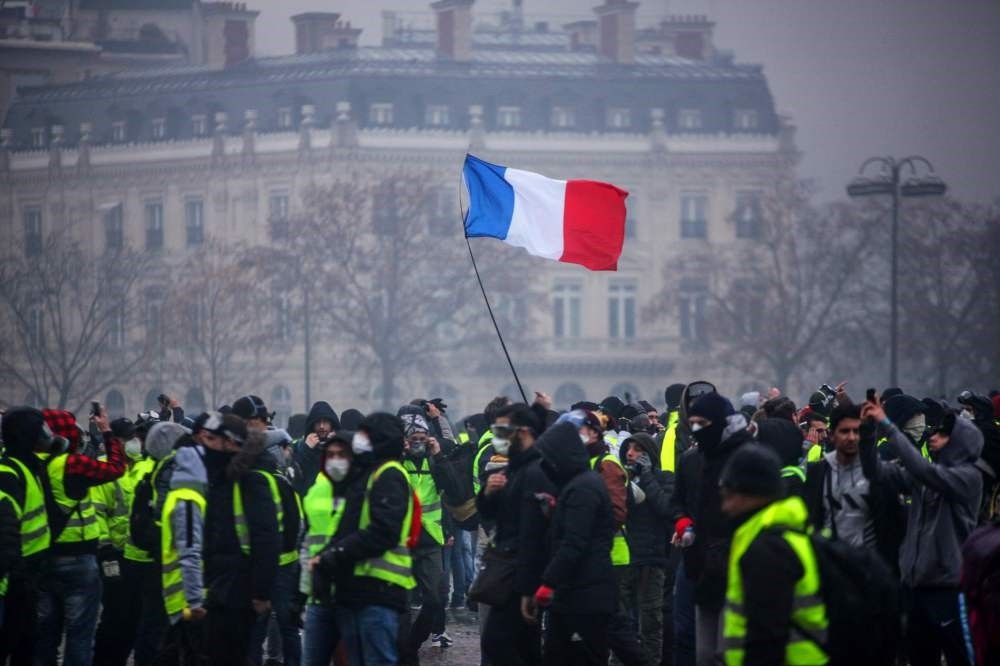 Demonstrators gather near the Arc de Triomphe in central Paris during a protest by the ,yellow vest, movement against rising fuel prices and living costs, Paris, Dec. 1.
by Emre Gönen Dec 04, 2018 12:00 am

The French presidency is trying to find a solution to the ongoing protests, but its task is not easy; the uprising, despite some extreme outbursts, likely represents the views of a large majority of moderate people

"Is Paris burning?" is the title of a famous novel and movie, and the question Adolf Hitler asked Dietrich von Choltitz, the then-military governor of Paris.

On Aug. 1, 1944, von Choltitz was promoted to the rank of general and on Aug. 7, he was appointed as the military governor of Paris. The Third Reich was already losing the war, so at a meeting in Germany the following day, Hitler instructed von Choltitz to be prepared to destroy all Parisian religious buildings and historical monuments.

After Choltitz's arrival in Paris on Aug. 9, Hitler confirmed the order by cable, "The city must not fall into the enemy's hand except lying in complete rubble."

A week later Hitler, in a rage, screamed on the phone, "Brennt Paris?" (Is Paris burning?) This was not a question but an order. Von Choltitz chose not to obey the direct order because his garrison was too weak to fight back the Free French Forces and the Second Armored Brigade under the orders of Gen. Jacques-Philippe Leclerc that were swiftly approaching Paris.

Von Choltitz proclaimed himself "the savior of Paris" and was supported by many others in his analysis. It is probably more accurate to say that the efforts of mediation of Swedish Ambassador Raoul Nordling and president of the municipal council Pierre Taittinger were more convincing.

Anyhow, the "city of lights" as Paris is called, was saved from destruction in 1944. It is worth remembering that in 1940, when a victorious German army paraded in the Champs-Elysées under the sad watch of the Parisian population, they cautiously skirted the Arc de Triomphe and the eternal fire burning underneath, as a symbol of gratitude to the "Unknown Soldier."

Well, what the Wermacht and its commanding generals had the presence of mind to avoid, happened last week. A number of protesters ransacked the Champs-Elysées and damaged the famous Arc de Triomphe. The symbolic shock created by the vandalism goes much deeper in the public opinion than first thought.

The "yellow vest" protests continue in France, all over the country, to a lesser degree of participation perhaps, but with increasing violence and determination. I wrote an analysis about this movement two weeks ago, wrongly thinking that it would disappear after an initial outburst. It is not disappearing, and public opinion polls show that French discontentment continues. The yellow vest movement has still the support of an overwhelming majority of the population. There are indications that four Frenchmen out of five support the movement. The trouble is that it is a very diffuse "movement" not represented by anybody and any other political party. The government, through an initiative by Premier Edouard Philippe, wanted to meet the representatives of the yellow vests in an attempt to mediate and stop the violence. Nobody came to Palais Matignon, only two people were there to "represent" the protesters, and one of them left the meeting after 20 minutes.

The government, wanting to secure an "understanding" attitude vis-a-vis the yellow vests, allowed a large manifestation on Champs-Elysées, while taking important protective measures. It did not help. The protests resulted in a couple of hundred injured people, one of them very seriously, and hundreds of arrests. Paris has been ransacked despite all the protection measures.

More and more, the amplitude of the popular outburst seems to target French President Emmanuel Macron and his distant, too presidential style. He has been compared, quite nastily, to late Queen Marie-Antoinette, who was executed during the French Revolution. She is famous for asking why the peasants were angry. When she received the answer that they had no bread, she said, "They can eat sweet buns."

In fact, Marie-Antoinette never said that. This is a story told by Jean-Jacques Rousseau in his book "Confessions," written at a time when he did not know Marie-Antoinette, who lived in Austria. However, the image stuck. The phrase is famously known for having been said by the queen. Well, the image of a distant and haughty president attributed to Macron can be viewed a little bit in the same way.

Now the presidency is trying to find a solution to the situation without losing face but knowing that the yellow vests will not accept cosmetic measures. The task is not easy, and the uprising, despite extreme outbursts, is likely to be followed by a large moderate majority of people.

Opposition parties, both from the right and left, are vying to channel the discontent into anti-Macron policies, but the yellow vests remain very distant from any political party. It might take the French government to accept a politically hard-to-swallow volte-face by decreasing and de-phasing certain taxes before this dangerous outburst gets even more out of hand.