The shadow of a murdered young woman 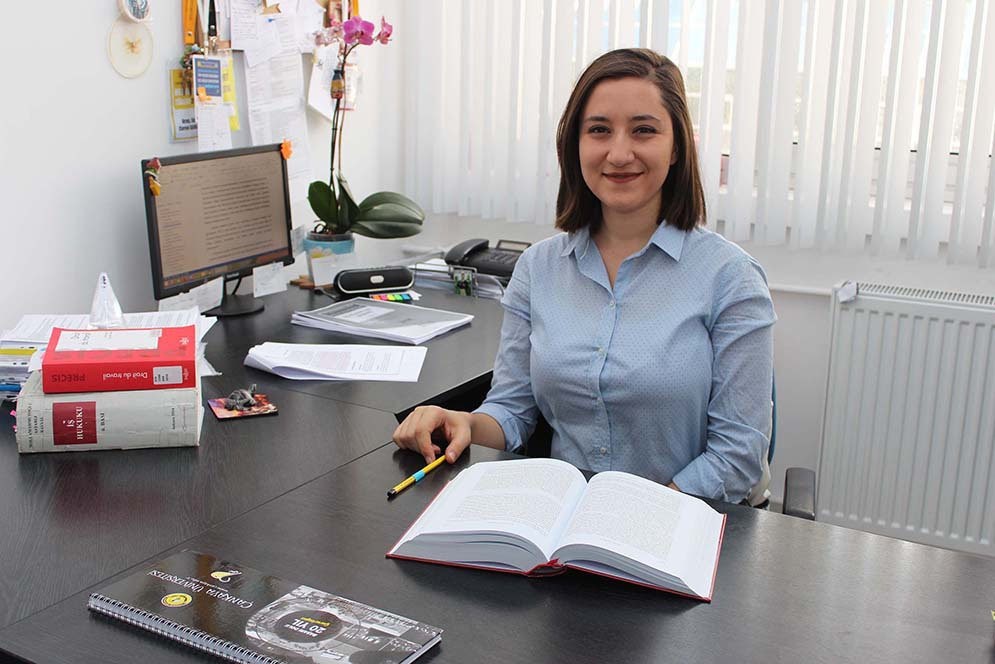 Ceren Damar, a 27-year-old research assistant at u00c7ankaya Universityu2019s law department in Turkey, was violently killed in cold blood by a student in her own office.
by Emre Gönen Jan 08, 2019 12:00 am

The violent murder of Ceren Damar, a young Turkish law academic, reminds us of the dangers in the age we live in and how unsafe we are even in the most sacred of places such as universities

I wanted to write about interesting political developments taking place in the European Union this week, but all I could do when I sat before my keyboard was think about one young woman's fate. I did not know her personally, and I will never get the chance of meeting her – she was a young assistant at a university in Turkey and she was murdered in her office a few days ago.

Her name was Ceren Damar, she had just married to a young diplomat and she was at the beginning of a promising academic career. We will never know how her career would have developed, because she was violently killed in cold blood, she was beaten and stabbed many times in her own office.

That morning, she was in her office contemplating what to do after she caught a student cheating on the final exam. It happened in a law school, which demonstrates the ethics and principles of the lawyer-to-be, who was known for bullying classmates and staff. She did what she had to; she took the student out of the exam and prepared a report to be submitted to the faculty dean or rector. Most of the analyses and reactions relating to the crime have been focused on the absence of security at the entrance of this particular university. There was probably some sort of security check at the gates, but a university student can enter the premises by just showing his or her ID card, without going through an X-ray machine.

This has a very simple reason: A university, very much like a hospital or place of worship, is a public place that is designed to welcome people, rather than establishing strict control mechanisms that would dissuade people from entering. Another common feature is that no weapon of any kind can be taken into places of worship, hospitals or universities. These are places in any society where healing, praying and learning are the only ways of interacting. A gun in a university would destroy the function and essence of the institution, as far as only "intellect" is to be used to challenge views, theories or to debate different subjects.

No violence can be accepted and should not be accepted in a university, nor in a hospital. That is one of the major social contract clauses in a society. This should not be seen as a particular, sad but uncommon murder. Every day seems to end with news about doctors or nurses being assaulted, high school teachers being threatened or university teachers bullied. The murder of woman is almost a weekly occurrence – and to add insult to injury they are often called "honor killings," as if murdering a defenseless woman can have any human dimension, let alone honor.

More importantly, this is not happening only in Turkey. France, whose democratic and Unitarian republican system has been an inspiration to many countries, including Turkey, has been witnessing professors being assaulted, even assassinated. In the U.S., where acquisition of a firearm is hardly controlled, school killings have turned into mass murders due to the availability of automatic assault rifles.

Terrorism has also claimed more lives recently than any other time in history. It does not need very sophisticated weapons or preparations; only a person with no more interest in life, driving a car or carrying an object designed to claim victims who have nothing to do with the "political" objectives of the terrorist. Recently, in Strasbourg, France, a very beautiful and calm town where I did practically all my university studies, was covered with blood on Christmas Eve. During one of the most sacred moments for Alsatian society, the Christmas shopping area turned into the setting of four people's assassinations by multiple-time offender, who was caught and shot after firing on police officers two days later.

The "yellow vest" movement, mobilizing less proponents, is also turning into a public bout between security forces and irredentist protestors. They even attacked a gendarmerie center in Dijon recently.

What is the explanation of this wave of violence? Impunity? Belated millennium fever? An acute sense of injustice fueled by a constant inflow of information through social media? Common hysteria in a period of transition, where principles disappear?

Whatever the explanation may be, the shadow of a murdered young woman haunts my writing and thoughts. Obviously, this type of killer is the worst type of individual society can produce; a stupid bully with a self-inflated ego, who went over the edge perhaps because he thinks he can scare people with impunity thanks to his father's obscure connections, who took his father's firearm and brought it to school. Nevertheless, I believe the problem goes much deeper, and it is high time to deal with the violence in society and challenge the sense of impunity some harbor for themselves.