Fear and hate in Poland: The Adamowicz murder 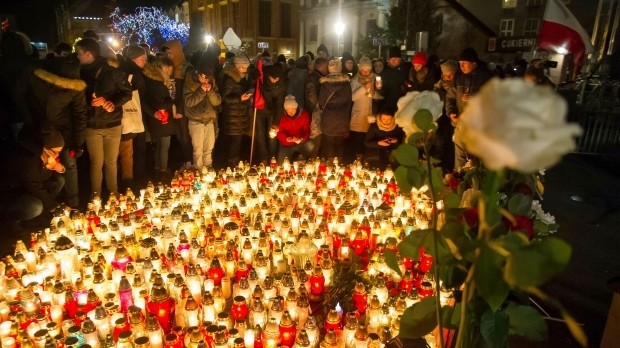 The murder of Adamowicz is an outcome of growing authoritarian and xenophobic sentiments in Polish society, signaling an alarming picture for the future of the country

Pawel Adamowicz, the mayor of Gdansk city in Poland, was stabbed and severely injured during a charity concert. Despite huge efforts from medical teams, he succumbed to his wounds shortly thereafter. After five hours of surgery, Dr. Tomasz Stefaniak, the director of the hospital where Adamowicz was being treated, declared, "With the deepest regret we must inform that unfortunately we lost the struggle for the life of the president of the city. Honor to his memory."

Adamowicz, for more than 20 years, was the mayor of Gdansk, formerly known as Danzig, a very famous town that saw the birth and the glory of the "Solidarnosc," or Solidarity, movement that started the demise of the Soviet-type socialist system in Poland. Donald Tusk, the president of the European Union Council, a native of Gdansk himself and close friend to Adamowicz, made a very emotional address. Thousands of people in Gdansk have silently marched for his memory.

This popular and progressive local politician, who participated in LGBT initiatives last year, was killed by a young recidivist, just released from prison, with a severe record of violent crimes. He shouted to the public that he was taking the revenge of his faulty imprisonment from Adamowicz's political movement.

During the last years, the mayor had been turned into a hate figure for the extreme right in Poland. In a country shifting more and more toward populist authoritarianism, such a violent political crime does not bode well for the future. Poland is not just an eastern European country; it remains a symbol of the fight for independence, fighting for its honor until the end. Under Russian occupation, the Sublime Porte (the Ottoman government), never recognized this annexation.

Each time the sultan welcomed ambassadors at the palace, the Polish ambassador's arrival was announced. Just after that the ambassador hit the road, the Chamberlin would announce that he was soon to arrive. That symbolic gesture perpetuated for 150 years, creating a deep sense of solidarity and admiration for the "Polish soul."

More recently, during World War II, Poland was "assassinated" to use the proper term. Attacked by both the Wermacht and the Red Army, it was totally devastated. Some 4,000 officers of the Polish Army were assassinated in the Katyn Forest by the Soviet Party commissioners. Warsaw was totally devastated, and not fewer than 3 million Polish Jews were killed during the Holocaust.

Western European countries owe Poland a huge apology, first for having declared a so-called war against Adolf Hitler but never attacking the Wermacht after Poland's invasion, second for having abandoned Poland in the aftermath of World War II.

The rise of Solidarnosc under the leadership of Lech Walesa created the resurfacing of this guilty conscience in western European countries. A lot has been done to extend western European solidarity to Poland. The election of a Polish Cardinal as Pope (the late John Paul II) helped hold Poland and its political situation high on the agenda for years. The "coup d'etat" that placed Jaruzelski at the leadership of the Polish regime has been severely condemned.

The first EU program to help the ex-socialist countries of Europe was called PHARE, an acronym for "Pologne Hongrie Aide à la Restructuration Economique," which means "Poland and Hungary, Help for Economic Restructuration." Together with Hungary, Poland remained a symbol for independence and proud national identity. From Chopin and Paderewski to Lech Walesa and Adamowicz, Poland remains the land of great patriots, people devoted to liberty.

Why Poland is turning into a terribly authoritarian and xenophobic society is the main question to be asked. Even EU membership, with all of its high-level standards of democracy, participation and public freedoms, did not prevent the rise of a terribly violent and revanchist extreme right, as shown in the assassination of Pawel Adamowicz. The rise of fascism needs to be taken more seriously than ever, in all the countries of Europe and the world.