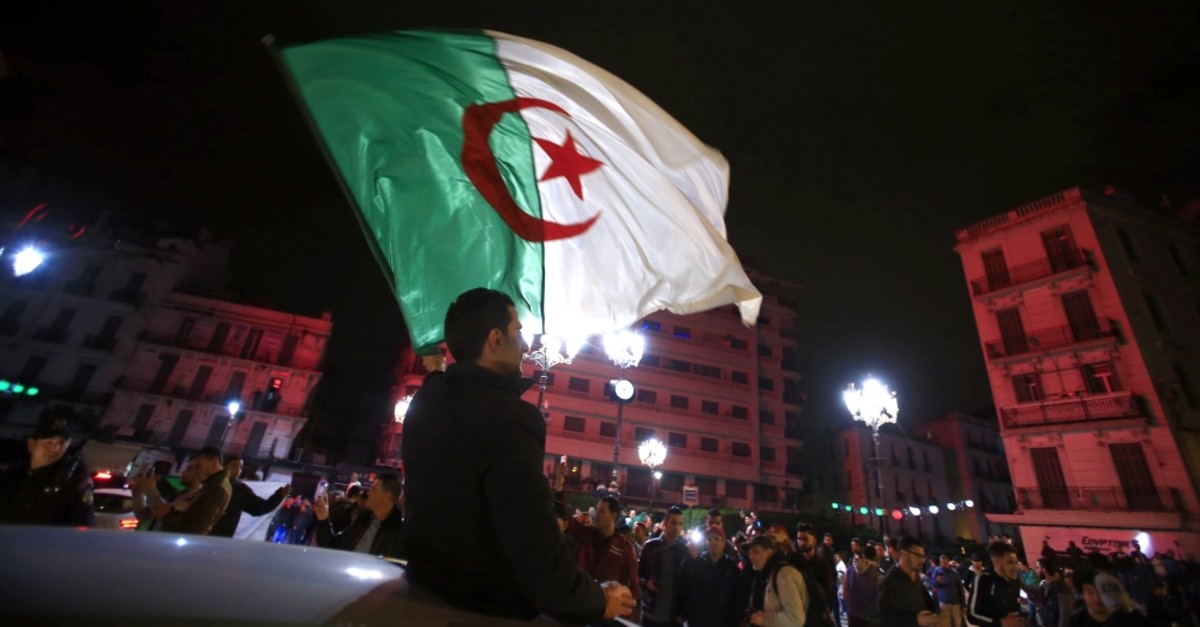 Algerian people, waving their national flags, celebrate in the streets of Algiers after President Abdelaziz Bouteflika announced that he is delaying the April 18 election and won't seek another term, March 11, 2019.
by Emre Gönen Mar 13, 2019 12:06 am

Up until now, the large and spontaneous protests have remained unmarked by violence. The Algerian people and society largely deserve a smooth transition and peaceful reformation of an autarkic system. But will the army see it this way?

Popular protests in Algeria had an important result: President Bouteflika, through a letter, declared he would not run for a fifth term in office, a victory for the popular and peaceful social uprising against his insistence on remaining in power despite poor health. However, it would be a mistake to think that new candidates would participate in the coming elections, while President Bouteflika enjoys a calm, peaceful retirement, probably in a hospital. Algerian power will not leave office just because tens of thousands of young Algerians reclaimed it. Bouteflika's letter concerns the changes to come, starting with a constitutional change to be carried out by a "pluralistic" national conference. The conference will be "inclusive, independent and equitably representing all currents in society." With a president at the helm, the conference will be "a pluralistic instance, an independent, experimented and consensual national personality." The elections have been postponed probably because Bouteflika or his clan wish to change the system before he leaves. There is no calendar, no deadline.

The coming elections will be held under the exclusive authority of an election committee based on special legislation inspired by "the best established practices internationally." Nevertheless, before that, a new government will be formed that will have "national competences reflected in the various parts of the National Conference."

The conference is in charge of "elaborating and adopting all types of reforms that will become the bedrock of a new system that will help launch the process to transform our nation-state."

Translated into comprehensible language, President Bouteflika won't ask for a fifth mandate but will remain in power until the National Conference, which he will nominate, totally overhauling the constitution and submitting it to a referendum, taking at leas

t eight to 10 months, if not a year. Meanwhile, Bouteflika will again nominate himself a "pluralistic" electoral committee to prepare the elections, without any calendar or deadline announced. To crown the whole maneuver, a new government, probably chosen from among the nominated participants in the National Conference will again be nominated by Bouteflika. All this will be done taking into consideration "best established practices internationally." This would sound like a joke if the future of the whole population of an important country were not at stake. It is very likely that the popular opposition will reject the kind of "democratic reformation" proposed by the president. All Bouteflika has decided to give away was simply not asking for a fifth mandate (but remaining in the post meanwhile) and getting rid of Prime Minister Ahmed Ouyahia, deeply unpopular for having compared the popular protests to what happened in Syria.

Praising the tenacity and maturity of the wonderful Algerian people is one thing; to see the threats barely hidden in presidential propositions is another issue. Already, by trying to keep a very sick old man in power, incapable of speaking, for a five-year term, the clan in power in Algeria has shown the limits of its inspiration. By trying to launch a deep reformation of society via presidential decisions, the Algerian government is doing the opposite of what the popular opposition asked for. Participation in a society is not decided by the government nor established through Bouteflika's nominations. In the coming days and weeks, we have to carefully monitor the Algerian army's moves, which clearly remain the force to reckon with. Up until now, the large and spontaneous protests have remained unmarked by violence. The Algerian people and society largely deserve a smooth transition and peaceful reformation of an autarkic system. But will the army see it this way?