Is the end approaching for Brexit? 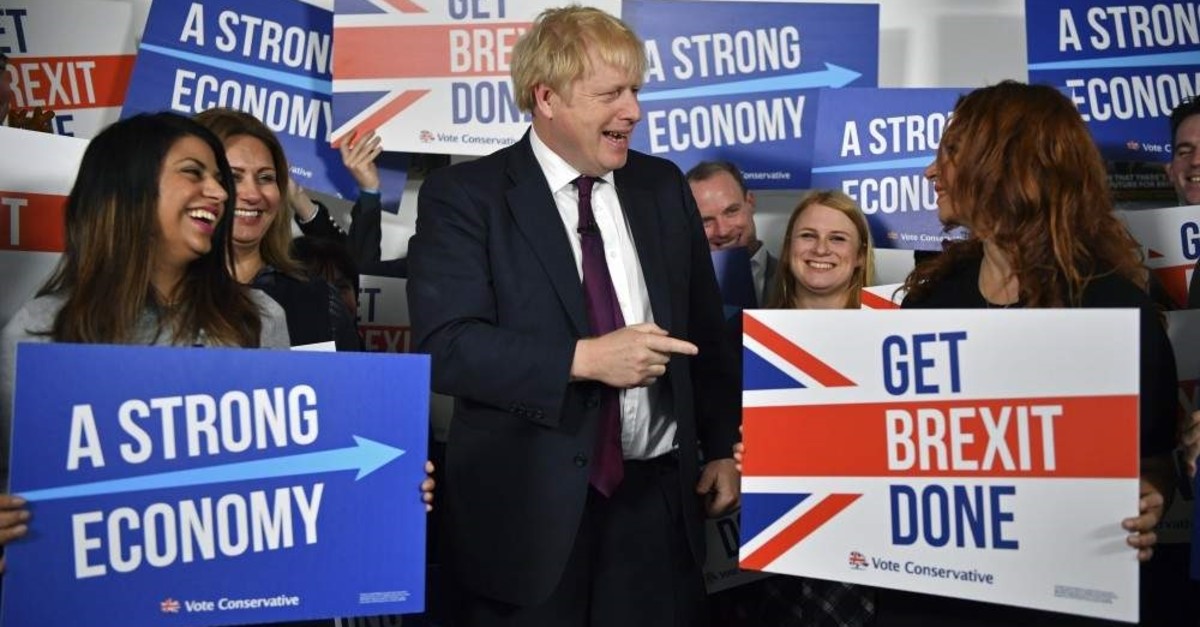 Britain's Prime Minister Boris Johnson (center) speaks to activists and supporters as he poses for a photograph at the Conservative Campaign Headquarters Call Centre, while on the General Election trail, London, Dec. 8, 2019. AP
by Emre Gönen Dec 11, 2019 2:04 am

Great Britain is poised to have snap elections in a few days. Opinion polls show Boris Johnson and his Conservative colleagues leading, whereas Jeremy Corbyn’s Labour, despite a visible recovery from the depths of voting tendencies, remains in distant second place. The Liberal Democrats seem to have a solid base but not strong enough to demote a possible Tory majority.

It is very difficult for anti-Brexiteers to have their voice heard amid the tumult in Britain. Anyone with some common sense left has understood the way Britain is moving away from the EU cannot be positive. The problem is that common sense is not so common in the U.K. these days. Almost three years of difficult negotiations, punctuated with violent verbal attacks on the part of the opposition and the intransigence of the government under Theresa May, have polarized society to a large extent.

The approach of the EU 27 to Brexit negotiations has also had a negative effect on British public opinion, already alarmed by the perspective of paying back the “British rebate” pertaining to budget payments. It was a dream situation for the populist wing, to begin with Nigel Farage, to argue that not only the EU 27 do not let the U.K. go, but also on top of that, they demand a “ransom.” This kind of debilitating propaganda works fine in such dire situations. It worked perfectly well at the European Parliament elections where Farage's last-minute so-called political movement, the “Brexit Party,” won more votes than any other political formation.

May, instead of establishing a sound cooperation system or platform among representative political forces, chose the alternative of steering the whole negotiations from the viewpoint of the Conservative Party and thought that she could please the Brexiteer wing of the Tories while persuading the center and the center-right, mostly represented by the Lib-Dem. She failed very badly on both fronts, her strategy of stubbornness backfired and she had to leave 10 Downing Street.

She has been replaced by the archetype of populist politicians, Boris Johnson, a pure breed like Berlusconi or Salvini. Johnson fights back against the Brexiteers of Farage so as not to lose ground with the right-wing. He has smelled blood and does everything to escalate tensions, because increased hatred against the EU remains his sole “cheval de bataille.” He is also using the only credible argument that consists of saying “the U.S. will help the U.K. to become great again" – pure populist propaganda void of any substance, but which could work in this period among the British.

The opposition, led by Corbyn’s Labour, has been incapable of forging an alternative strategy for Brexit for too long now. Their proposal to submit the final Brexit deal to a popular referendum comes far too late and the EU 27 are not very happy with the equivocating stances and policies of the U.K. political movements.

Now the elections are at hand and the results will be known soon. The British voting system is made up of uninominal circumscriptions with a single round of voting. The proportion of votes received hardly matches the number of seats earned, with the system giving a very large advantage to the candidate who comes first.

John Major and Michael Haseltine, former premier and vice-premier of the Tory party, are openly campaigning to establish a “remain” front for the elections. They are trying to persuade voters to vote for the best-placed “remain” candidate so that the majority of seats will go to opposition candidates. Normally, such a strategy has high chances of being unsuccessful, but in view of the deep polarization among voters, there may be an exception this time. We will know very soon the results of the elections, but in any case, this will not solve the U.K.’s problems. If there is a Tory victory, Brexit is under risk to be carried out without a deal. The EU 27 are not very likely to show understanding and flexibility to Johnson. In the best case, a “revision” of the deal may happen, which does not bode well for the immediate future. If the opposition wins, they also would like to have a “revision” of the deal, which may be accepted this time by the EU 27, then there will be a second referendum, after campaigning this time to really inform U.K. voters about the outcome of their vote.

Anyhow, we are not finished with Brexit yet; to add insult to injury, the vociferating radical cohort of the Brexit Party at the European Parliament is there to envenom the atmosphere of U.K.-EU talks in coming weeks and months.

When one thinks that the Tory government, to prevent the Conservative Party from being torn apart, has unclenched the whole issue, the present situation is eloquent: former conservative tenors, ex-premiers, former ministers campaigning for the Labour or Lib-Dem vote. We should never overestimate the intelligence, perspicacity and clear-sightedness of politicians.