What is happening in France? 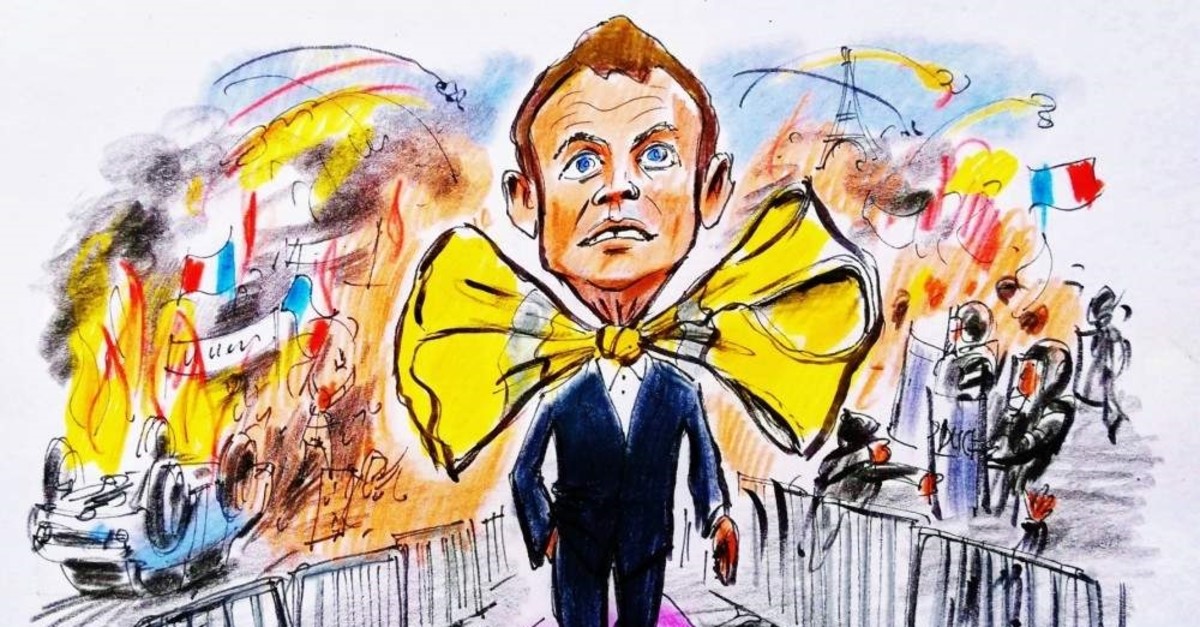 Illustration by Erhan Yalvau00e7
by Emre Gönen
Jan 14, 2020 12:29 am
A wave of manifestations, protests and strikes has been shaking French society for more than a year now. The yellow vests movement erupted without warning. Initially, the movement came as a reaction to the minimum wage in the country, but it quickly turned into a large-scale social uprising, encompassing not only the workers or the farmers but the "laissé pour compte," a French expression meaning the "leftovers" of the society. The retired people have just enough pension to survive in a society of consumption.

France is a formidable social state, compared to many other European states. Education is of excellent quality and public, with practically no charges for schooling and para-scholar activities; universities are free of charge; health care is almost universal; working hours are limited; public transportation is excellent; yearly holidays amount to six weeks. In addition, employment contracts give the employee very strong job security.

On the other side of this reality, you have chronic high unemployment, especially among young candidates wishing to enter the employment market for the first time, and disaffection of rural areas and small towns of the advantages of big metropolitan areas. The traditional biggest agricultural power in Europe, France today fights against the disaffection of the countryside and is having trouble replacing the aging farmer population.

The one problem that haunts all European countries and developed countries around the world is the fact that the baby-boom generation is retiring and the replacements are not numerous enough to sustain present trends of pension payments. The human race has achieved immense progress in extending our lifespan, which is great. We live longer than any period of human history, and we live healthier. Why? Because developed countries take good care of their populations through health care, preventive medicine, better nutrition, et cetera. Nevertheless, the older the population, the more the elderly need proper and specific care. All these issues combined put a very severe strain on the social security budget. This is making the whole retirement situation more complex and almost impossible to sustain. The French presidency wanted to implement a deep reform, but its initiative stalled over the last couple of months amid an immense wave of strikes.

Trade unions, whose influence and number of members have been dwindling for years, have come under the limelight and shown the government that they are still a very strong force to contend with. The government does not want to step back, but in the current situation of the social conflict, both sides will have to show a lot of flexibility to find common ground.

In France, long periods of political stability have almost always been punctuated with large social uprisings. May 1968 remains the stereotype of that kind of unexpected outcry. In 1995, under Jacques Chirac's presidency and Prime Minister Alain Juppé, a similar attempt to reform pensions and retirement created a very large wave of strikes, obligating authorities to take back their amendments.

Everyone knows that the retirement system has to be revised, but nobody wants to pay for it. This is the main dilemma. Increasing the age of retirement to 64 for France is an Achilles' heel; trade unions do not wish to even discuss it, but this factor remains essential for the government's new system. We will see in the coming weeks what kind of common ground will emerge.

However, already, some conclusions can be drawn from the social developments in France. First, this represents deep frustration in view of the flaws distributive justice is entangled in. This is not the "working-class organizing the revolution to prepare for wonderful tomorrows," but the lowest layer of an immense middle class, who is very afraid of the future. Second, the time of discipline and institutional social opposition has passed. The yellow vests have tainted the monument of the unknown soldier underneath the Arc de Triomphe, something that has never been done by anybody before, not even Nazi invaders. This time, the trade unions, who would normally call a truce for the traditional feasts of Christmas and the New Year, opted for the continuation of the strike in public transport. Especially in the Paris area, transportation has become a tragedy, increasing discontent among public opinion.

What is happening in France would show us the risks that will be encountered by most of the developed or semi-developed countries around the world. This is also showing what our real problems are. In the immediate future, our systems will no longer be compatible society's reality, be it old populations, distributive justice, environmental hazards or demographic trends. Any attempt to reform, even partly, the systems encounters strong opposition because the ruling political elites, as well as the opposition, have lost the confidence of the population. It is high time to develop and implement a new type of social contract and new ways of production relations. Until then, we will see more and more French-type social turmoil everywhere.