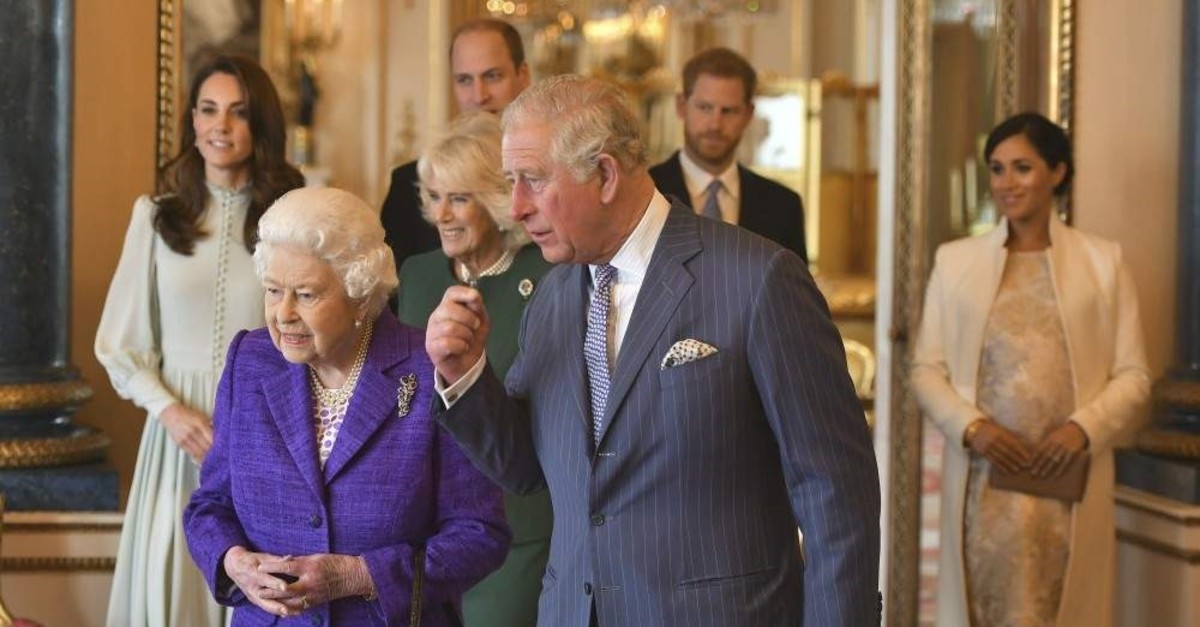 Britain's Queen Elizabeth II is joined by Prince Charles and at rear, from left, Kate, Duchess of Cambridge, Camilla, Duchess of Cornwall, Prince William, Prince Harry and Meghan, Duchess of Sussex, during a reception at Buckingham Palace, March 5, 2019. (AP Photo)
by Emre Gönen Jan 22, 2020 1:26 am

Farouk, the last sovereign of Egypt, known for his love of casinos and gambling, is believed to have said before being overthrown by Mohamed Neguib and Gamal Abdel Nasser in 1952 that "only five kings will survive to the year 2000; four of them will be in a pack of cards, and the remaining one will be in England."

Constitutional monarchies can offer greater political stability at the highest level of the state. Most northern European countries such as, Sweden, Norway, the Netherlands, Denmark and Belgium are all constitutional monarchies, so is Luxembourg, which remains a duchy. Spain has opted for the continuation of the monarchy after the rule of dictator Francisco Franco.

The former socialist countries of Europe, which were also monarchies before World War II, have all turned into republics. For the time being, the only two important world powers that remain constitutional monarchies are the United Kingdom and Japan. Scandinavian countries are also all constitutional monarchies, but they have much less influence in the international arena. In addition, England's Queen Elizabeth II remains the symbolic head of state for many countries, especially the former provinces of the British Empire like Canada, Australia and New Zealand.

At a time when remakes of the 1938 Munich Agreement are being staged in Berlin and Libya, is it really interesting to speak about the fate of constitutional monarchies? As far as political stability and the continuation of the state apparatus are concerned, monarchies can still play an important role. South Asian monarchies, more or less resembling the Japanese model, place great importance on monarchs; however, royalty rarely plays political roles other than being the largest common denominator for his/her people. The Mikado represents perfectly well this model, as he is the subject of a true veneration among almost every layer of the society, enjoying the religious worshipping by a very large majority.

However, the Mikado is not involved politically; his authority, despite being immense, only reflects a symbolic national union. The system works almost the same in Thailand, where the monarch is deeply worshipped. But in view of the instability of the country, the king has to intervene off and on to stop the violence of military governments.

As a general rule, a constitutional monarchy is advantageous if there is a working, smooth democratic governance and strong parliamentary system. The monarch represents then the paternalistic figure of the governance superstructure. He/she does not bear the responsibility of implemented policies but through the monarch, the people celebrate national unity.

The problem is the monarch does not act alone. There is a myriad of affinities within the palace, most of the time made up of the monarch's extended family. Like in any family, some are more likable and colorful than others. However, the function of any member of the royal family is to represent the monarch. This is not an easy job and most of the time, European mass media is full of juicy stories reflecting scandalous moral or financial turpitudes of different members of royal households.

Royal families are financed by national budgets, so stringent moral conduct is expected all of the time but seldom offered. The British monarchy has had the kind of problems enumerated above, but somehow kept most of the former lifestyles of the British crown. Due to the queen's popularity and her diligent handling of the current or important business, the British crown has overcome many crises throughout the decades. The colorful life of the royal household has inspired many documentaries, fiction works and the latest TV series, "The Crown," which saw huge success. But since Lady Diana's scandalous death, the queen has tightened the reins on the royal household. Prince Andrew, the queen's third child, a renowned "bon vivant," was the first victim after a resounding scandal. He has been ousted from the royal duties.

The second in line was the flamboyant young couple, Prince Harry and Meghan Markle, whose reputations started to outshine both Prince Charles and the royal couple in line, the Duke and Duchess of Cambridge. That was not to the taste of the Buckingham Palace. A former U.S. movie star can make a great princess in Monaco, but Buckingham and the British royal household require much better restraint and a lower profile.

With Brexit imminent and Prime Minister Boris Johnson at the helm of Westminster, the U.K. wants to look more irreproachable than ever. Johnson's dream to transform the U.K. into a totally deregulated "big Singapore" at the threshold of the EU may not see much success, but the queen has shown once again how masterly she can handle difficult situations and how diligently she can make the monarchy adapt to new conditions. It is a pity that she is only a constitutional monarch, the U.K. could have used her good advice during these difficult and blurry times.