A murder and primitive opposition 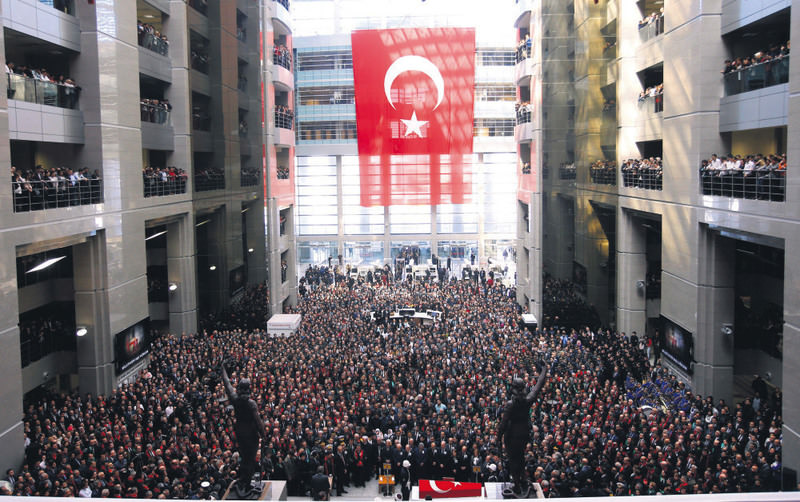 Turkey really needs a reformation, but not only in terms of a new constitution and a new political system. It needs to internalize how to coexist with others, consenting to rights, and how to avoid seeking privilege

Last week, Turkey experienced a tragic day reminiscent of the 1970s, which is not really very surprising. Two militants of an outlawed political organization took a prosecutor hostage and killed him. On the same day, another group of assailants from the same organization occupied the Justice and Development Party (AK Party) office, while some of them organized an attack on Istanbul's Police Headquarters. It is not difficult to guess the motivation behind this series of overt terrorist attacks. It is likely that the perpetrators believed their actions would incite chaos and the rise of a resistance similar to the Gezi Park incidents. In other words, it was probably hoped that the police would be provoked by the tensions and conflicts that might arise in various locations in the city, and would therefore be forced to use weapons, which might lead to civilian deaths. Thus the government would struggle to control the situation. In such an atmosphere, it would be possible to assert via certain Western media outlets that the AK Party has become increasingly authoritarian and lost its legitimacy. Of course, in the midst of all this, the murder of prosecutor Kiraz would fade into the background and be forgotten.

With only two months to go to the upcoming elections, everything seems quite rational for the opposition group, which prepares to "celebrate" May Day and Gezi's anniversary successively. But this "rationality" actually signifies an unhealthy state of mind. It is really depressing to witness a mindset that sees murder as permissible and legitimate for the sake of politics, trapping the minds of well-educated people who regard themselves as modern, progressive, enlightened and Western. Apparently, the opposition is paralyzed by the idea that the AK Party will also be victorious in the third critical election within a space of 18 months. There is no need to describe how pathetic the approach is that cannot produce a political alternative, but builds all its expectations on the disbanding of the AK Party.

The murder of the prosecutor might actually have been a chance for the opposition to recover some ground. They could have used this opportunity to address Turkey as a whole. In addition, some conflicting voices in the AK Party during the recent months presented the potential to undermine the ruling party's power. However, by displaying an overt lack of political foresight, the opposition proved once again that the AK Party is still the only viable alternative. Even the leader of the Nationalist Movement Party (MHP), which is a right-wing nationalist party categorically against left-wing terrorism, did not attend the prosecutor's funeral. The Republican People's Party (CHP) leader Kemal Kılıçdaroğlu did not attend the funeral either. Moreover, he did not even manage to condemn the murder. The spokespersons of the Peoples' Democratic Party (HDP), who claim that they are doing politics for peace and trying to integrate into the rest of Turkey, protected the terrorist attack and equated the death of an innocent man to the death of murderers.

Now, the secular segment of society asserts that this murder benefited the AK Party. Actually this assertion can be interpreted as the opposition's confession of its own absurdity and lack of humanitarian values, since the murder is not the reason for the increase in the AK Party's votes. The reason is the AK Party's humanitarian stance in contrast to that of the opposition in the aftermath of the incident. The majority of the Turkish public continues to act with common sense and stands against attempts to manipulate the murder of an innocent man for political gains. Even those who are uncomfortable with some governmental policies and discourses do not respect an opposition that failed to show even the slightest humanitarian response to the murder.

Turkey really needs a reformation, but not only in terms of a new constitution and a new political system. It needs to internalize how to coexist with others, consenting to rights, and how to avoid seeking privilege. On this point, it is not the religious citizens, but the secular ones who need a renewal.
RELATED TOPICS