The Armenian question and political regime 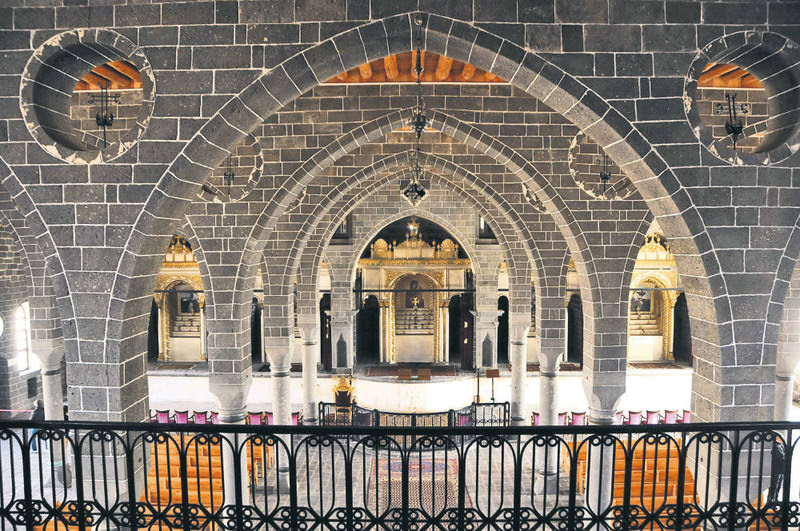 Surp Giragos Armenian Church in Diyarbaku0131r has been renovated and reopened after nearly 20 years with a contribution by the local administration.
by Etyen Mahçupyan May 06, 2015 12:00 am

The Armenian question continues to be an issue of the political regime. Although the Kemalists of the 1920s created an authoritarian regime by not addressing it, the AK Party may have the power to change the political system by discussing the issue today

My previous piece indicated why the Justice and Development Party (AK Party) government would not take offense to the idea of discussing the Armenian question in Turkey. Obviously, this will have many benefits on a humanitarian level. Indeed, Armenians, as well as Turks and Kurds, who are on the "other" side, have been largely consumed with this issue. The concept of genocide has caused the alienation of both parties and made them break away from the past. The rise of dialogue will naturally bring normalization and make the discourse of both parties more objective.

However, the discussion of the Armenian question has further benefits for the AK Party government. First, it is an important opportunity for their identity, which is represented by the AK Party, to escape the oppression regarding "genocide." As is known, although people from all segments were involved in the massacres in 1915, almost all of those who protected Armenians were religious Muslims. Furthermore, almost all Armenian properties fell into the hands of unionist families. In other words, discussions will lead today's religious Muslims to differentiate themselves from the unionists. Considering that the unionist mentality was made permanent by the military coups and continually went to extremes, to the detriment of religionists during the postmodern coup of Feb. 28, 1997, it does not seem too much to expect for conservatives to take this step.

This differentiation will open new channels of legitimacy for the AK Party in the upcoming period. If we need to escape the Kemalist authoritarian secularism, as well as the statist and poor nationalism on which Turkish identity is based, we need a new psychology, which would be provided by this historical breakaway. This assessment takes us to an interesting point: The Armenian question is not only a matter of tension between identities, but also a factor that determines the nature of the regime in Turkey. Just as the AK Party can have the power to change the political system by discussing the issue today, the Kemalist staff of the 1920s were able to create an authoritarian regime by not addressing it. The Armenian question, which occupied a place in the media in 1918 and 1919 and was overtly discussed and, suddenly became taboo and described as a "matter of state." The state manipulated the taboo to produce "reasonable" citizens. Thanks to the argument suggesting that the Armenian question posed a threat to the continuity of Turkey, citizens were told what to say and even how to think about the matter. In brief, the Armenian question became an instrument for the state to maintain the authoritarian regime in Turkey. The fact that Armenians prioritized the concept of genocide was used to justify this attitude in later years.

Let us go further back in time. We know that the unionists and the Armenian Revolutionary Federation, Dashnaks, worked closely with each other and had the same views on the Sultanate regime. So, was their estrangement from each other only an identity problem? Or, was it about the new regime that was to be established? Although it is not very popular, the analysis that Armenian American historian Gerard Libaridian propounded 30 years ago provides a deep insight into the matter and draws attention to this point. If the unionists had come to terms with the Dashnaks and the country switched to a regime where Armenians would be relatively autonomous, it would inevitably have required a political system that would be strong in democratic aspects. In other words, a decentralized structure, where the unionists would share the political power, would arise, thus, the influence of the center would decline. When we consider the unionists' political views, which were very close to Jacobinism, we can foresee that such a future would not be particularly attractive.

After all, just like in the past, the Armenian question continues to be an issue of political regime as well. Previously, the idea of peace with Armenians indicated a frightening future, today, however, it might be a part of a desirable future.
RELATED TOPICS