How did the HDP turn out to be an ISIS proponent? 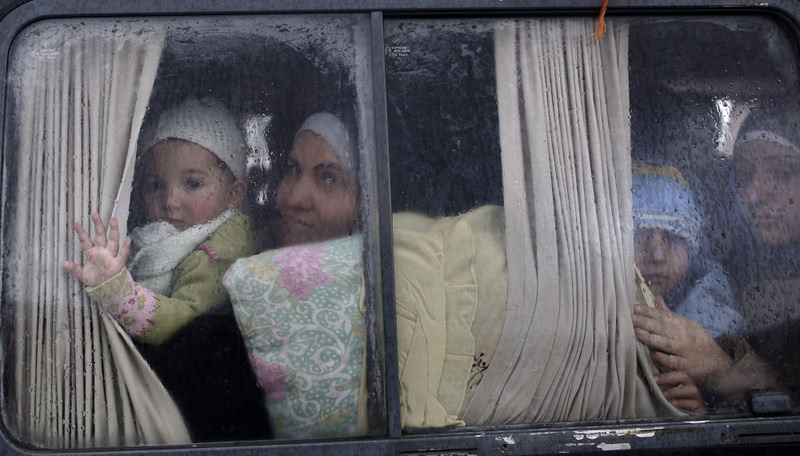 Syrian refugees, who fled their home in Idlib due to a government airstrike, look out of a vehicle's window just after crossing the border from Syria to Turkey.
by Etyen Mahçupyan Aug 05, 2015 12:00 am

As long as it harms others in the region, the PKK is content to allow ISIS to terrorize people irrespective of the fact that it also is fighting it

A 90-kilometer line of Turkey's Syrian border was in the hands of the Islamic State of Iraq and al-Sham (ISIS) for a while, posing a major problem for the government. On the other hand, the Justice and Development Party (AK Party) decided not to take any step that would leave it alone and in the lurch. Consequently, Turkey had only one option to intervene on the border by coming to an agreement with the U.S. They could eventually meet on common ground following two weeks of negotiations and, as is already known, Ankara accepted taking an active role as part of the coalition forces.

The first outcome of this was bombing ISIS encampments on the other side of the border, which also favored the Democratic Union Party (PYD) on paper. Since ISIS is positioned in the region between PYD cantons, the PYD's domination over the whole region would become possible if ISIS were cleared out. On the other hand, the terrorist PKK was understandably against an intervention that Turkey would attempt on its own, since they thought that Turkey would not stop at that point and also touch the PYD's People's Protection Units (YPG). In other words, the safe option for the PKK, the Peoples' Democratic Party (HDP) and the PYD was Ankara's intervention within the knowledge and under the guide of the U.S.

Turkey agreed with the U.S. and bombed ISIS positions. However, we were confronted with an odd comment from the PKK. The HDP asserted that it was a preliminary act to intervene in the PYD, nearly urging the government not to strike ISIS. This time, and maybe from now on, the PKK did not trust the U.S. for the obvious reason that the PKK had taken an illegitimate step that ended the cease-fire and paved the way for the U.S. to provide support in fight against the PKK. In brief, the strategy the PKK has been following in the last month has turned into a trap set directly for itself, and it has even had to demand the protection of ISIS in order to get rid of it. This indicates that ISIS is actually quite a functional foe for everyone. Everyone is content with the organization as long as it harms others. On the other hand, in the cases when others harm ISIS, again special facilities that could benefit anyone come on the scene. For instance, the PYD naturally benefited from the bombing of ISIS by the U.S. to a great extent. The organization is positioned in the region where ISIS was driven out and it forced the Sunni Arabs and Turkmens in the region to migrate. In this way, it undermined the opponents of President Bashar Assad in Syria and reinforced its own relative power. In addition, this situation forced Ankara to side with Washington, and Turkey contributed to the U.S.-led coalition fight against ISIS, which legitimized the position of the PYD more.

We had actually witnessed this complex scene before, but with Assad instead of the U.S., ISIS instead of the PYD and the U.S. instead of Turkey. A while ago, some areas were evacuated and ISIS settled in the evacuated areas since regime forces hit the Syrian opposition. ISIS reinforced its power by excluding Sunni society from the domain of the Free Syrian Army. On the other hand, the U.S. had to provide more support to Assad in his fight against ISIS. But this situation intensified Assad's struggle against the Syrian opposition and legitimized Assad's position more.

We can infer from this picture that everyone is a potential ISIS proponent when the conditions are convenient. Even battling ISIS does not constitute an impediment to it. The U.S. has finally understood Ankara's needs and evaluations and the two countries have met on a common strategy including this point, which seemingly caused the PKK and HDP to panic. When they fell into the trap they set for Turkey, they found no remedies other than shifting to a ridiculous position such as protecting even ISIS from Turkey. All these indications show that it is high time to stop regarding the Middle East as a playground and act with collective responsibility in the region.
RELATED TOPICS