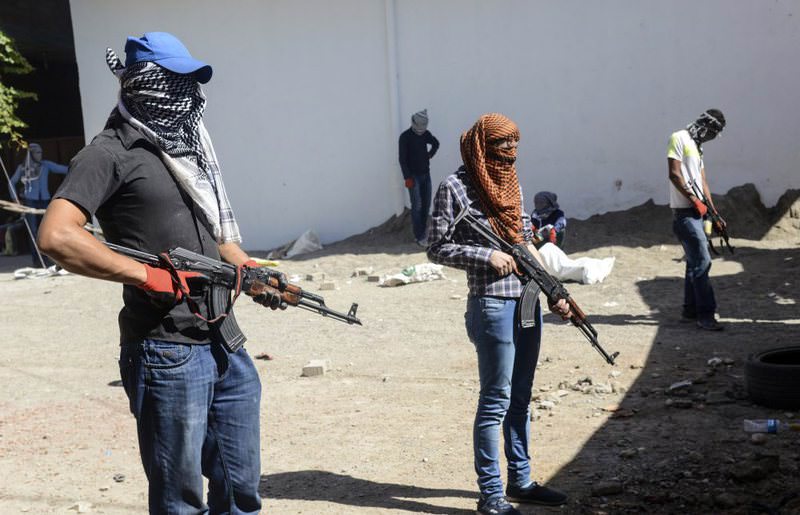 Armed Kurdistan Workers' Party (PKK) terrorists stand behind a barricade during clashes with Turkish forces at Bismil, Diyarbaku0131r.
by Etyen Mahçupyan
Oct 07, 2015 12:00 am

People want the establishment of permanent peace by rational actors after the reconciliation proccess. However AK Party will keep the process suspended until it sees a rational PKK

One of the leading discussions regarding the election campaigns is the question of who ended the reconciliation process. Even this discussion is a sign of the positive atmosphere created by the reconciliation process and the support the process received. Obviously, the answer to "who ended it?" reveals to a certain extent who would be blamed and who would lose votes in the following elections. Therefore, the senior figures of the outlawed PKK and the Peoples' Democratic Party (HDP) are blaming the Justice and Development Party (AK Party), while the AK Party members are blaming the PKK and the HDP.

However, here we have two intertwined questions. Who ended the process? And because of who did the process come to an end? The answer to the first question inevitably refers to the government since it is the willpower that initiated the reconciliation process. This initiative had never been a strategic move of the PKK or its imprisoned leader Abdullah Öcalan. Although Öcalan's approach to the process bears vital importance, the AK Party was the main agent that made the decisions, took the risks and stepped forward. The process had never been adopted as a state policy, either. The AK Party was the agent turning it into state policy. Consequently, the only actor that has a real agency over the process is the AK Party. In this case, it is naturally the government that ended the process. However, in order to avoid being entrapped by a superficial judgment, the second question must also be answered, and there is not much hesitation regarding the second one: The process came to an end because of the PKK. The PKK finally implemented the malicious plot it developed over two years and initiated a so-called "revolutionary people's war." The organization built this project by means of its urban youth wing, namely the Patriotic Revolutionary Youth Movement (YDG-H), which was founded two years ago. It also developed a tactic that was taken for granted to enable public support to the call of uprising. It was presumed that if the military and police officers were assassinated, the government would kill hundreds of Kurds as a reprisal. But the project failed as the AK Party did not follow such a path.

So, to make a political analysis, we have to accept the fact that the reconciliation process came to an end due to the PKK's decision of taking up its arms again. It would be impossible to expect the government to maintain the process in the same way while the PKK is battling against the state. This equation also gives a clue about how the process could be resumed. If the PKK decides to lay down its arms against Turkey inside or outside Turkey's territories and withdraws its armed forces, the AK Party will embrace the same policy again. In brief, it is necessary to introduce peace to pave the way for any negotiation.

However, this peace cannot be expected to satisfy Kurds. Kurds expect a new Turkey where equal citizenship and an emancipatory order would be settled on constitutional grounds, and they call it "Peace" with a capital P. The reconciliation process covers the distance between peace and Peace. Within this line, every step builds up the next step and functions as a prerequisite for the preceding one. For this reason, a meaningful reconciliation process cannot be achieved unless a permanent peace in the sense of complete cease-fire is introduced. Likewise, as long as the reconciliation process is not conducted with a determined agenda and schedule, a meaningful and permanent Peace cannot be attained.

The first actor in charge of pursuing this path is the AK Party. But the PKK is the one that will enable the AK Party to take up the road again. It should be kept in mind that the PKK has hampered the peace process since it did not want a democratic resolution. However, a Peace that is not based on a democratic resolution is not likely to survive. In other words, the PKK does not want Peace in the final analysis. As a result, it obscures to what extent the AK Party can create Peace since the party is not under the proper pressure to building the reconciliation process in the absence of a peace ground.

Today, the Kurdish people's rejection of this "revolutionary people's war" keeps hopes alive. A civil war will not break out even though the foreign media outlets want it to happen. People want to see a rational PKK and the AK Party will keep the reconciliation process suspended until it sees a rational PKK.
Last Update: Oct 07, 2015 10:21 am