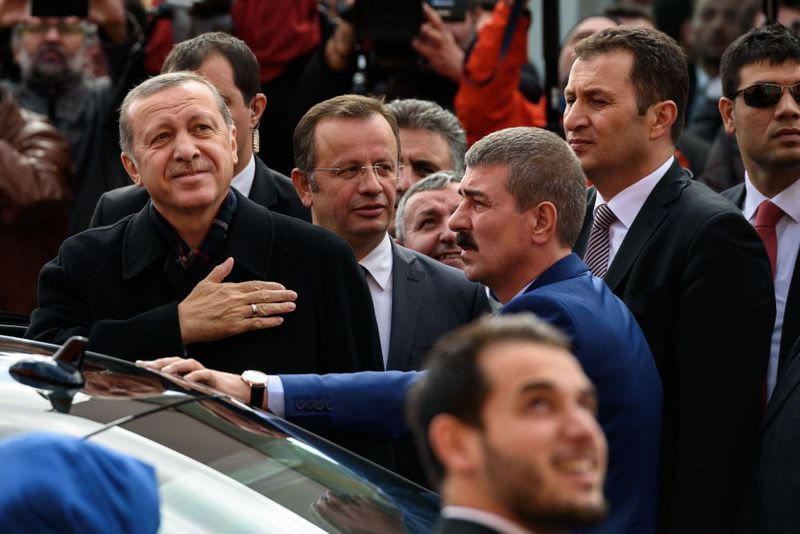 Erdou011fan gestures to supporters after casting his ballot for the elections at a polling station in Istanbul
by Etyen Mahçupyan
Nov 03, 2015 12:00 am

At the point reached today, the AK Party has again pulled ahead at the end of a marathon of four elections in two years

I was wrong in my election forecast... While my prediction of 44 percent vote share for the Justice and Development Party (AK Party) has turned out to be quite modest, the party has attained 49.4 percent by repeating its success in 2011. However, my prediction still came closer to the outcome when the performance of the survey companies, on which many efforts and money were spent, is considered. Even the agency that made the closest prediction indicated 47 percent of vote share for the AK Party, while majority showed the party's share around 41-43 percent. The most important reason of this is the fact that the mass determining the election results in Turkey only comprises 30 percent of the electorate. Others are voting for the same party at every election. This 30 percent does not equally represent all segments across the country. They are mostly from a segment which is conservative in cultural terms. For this reason, making right predictions requires catching up with this segment through a right paradigm. If the distribution of votes in this group is parallel with the overall distribution, survey companies succeed in their predictions. But if the vote distribution in this group is different from the overall distribution, we can face a total failure in predictions, as shown in the latest case.

On the other hand, one can observe an atmosphere which leaded people to make temperate predictions about the AK Party when the psychology of the last five months is considered. In the framework of a discourse backed up by the Western media, it became quite popular to assert that the AK Party is in decline, it would not come to power alone again, and this would indicate a dissolution process. This factor also might have narrowed down the horizon of survey companies. There was a strong belief regarding that the June elections expressed a new reality. However, the situation is quite different for ones observing Turkey according to more objective criteria: The results of the June elections did not indicate a "normalcy", but a divergence from normalcy, which could be temporary, because the main equations of the country are in their place without any change. The AK Party is still the only party which could totally eradicate the tutelage regime, draft a constitution basing on democratic values, resolve the Kurdish question and improve integration with the global system. Consequently, the electorate punished the AK Party on June elections as the party's inclination of diverging from the abovementioned targets increased. But this did not mean a categorical rejection because the AK Party did not have another real alternative, and the electorate was realistic enough to see this obvious fact. Within the course of the five months after June elections, the AK Party achieved a performance which regained the electorate support to the party. Meanwhile, the destabilization due to the Syrian issue was also influential because while other parties adopted policies to make use of this destabilization, the AK Party insisted on behaving responsibly.

At the point that has been reached today, the AK Party has caught a "zero point" again at the end of a marathon of four elections within two years. If this opportunity is seized, Turkey will be probably governed by this party at least for ten more years. If we want to have a grasp of Turkey, we must get rid of ridiculous expressions such as President Recep Tayyip Erdoğan acts as a sultan or a dictator, and focus on the society. At least one third of the Turkish public expects their own choices and demands to be represented in the political scene without being fixed on identity-related concerns, and the AK Party is the only one that could answer such demands. Those who think that Erdoğan's wish came true are wrong. Contrarily, the one third of the society's wish came true. They are aware of the fact that Turkey's democratization, peace and welfare are possible through an AK Party which behaves properly. When the AK Party diverges from this path, a considerable part of them diverges from the AK Party. An example of this divergence was witnessed at June elections. And as the AK Party reentered the right track, majority of this electorate group came to support the party again.

The big picture has not changed at all. The AK Party is still the only meaningful political addressee of the public and the unrivaled agent of the following period with the credence public has attached to it recently.
Last Update: Nov 03, 2015 2:22 am