Refugees' kiss of life to the Kurdish question 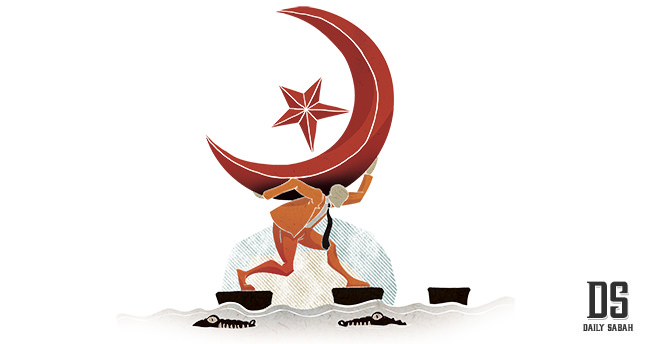 Turkey has a past during which domestic and foreign policy was considered and assumed as completely separate entities. For decades, it was believed that foreign policy was required to reflect state willpower independent of the stances of political parties. Domestic policy, on the other hand, operated in a limited area depending on the framework determined by military authorities, and political parties struggled to occupy a space within this very narrow space. The three major factors following the end of the Cold War that contributed to the change in this picture were the Justice and Development Party (AK Party) coming to power, the EU membership process being reinitiated and the collapse of the artificial order in the Middle East.

These factors did not emerge simultaneously, however. First of all, the AK Party made its ruling power accepted by the bureaucracy and privileged social strata by resisting all efforts to overthrow the party. In this period full of ups and downs, the latest elections signaled a new period. The idea that a new, common future can be searched for through various cultural identities, which have a potential to go along and relate to each other, has finally started to be digested. On the other hand, the AK Party governments tried to employ the EU membership process as leverage from the very beginning but could not cover so much distance due to the balances in the EU. The stagnation experienced during the process also created difficulties for the AK Party, but recently, a new acceleration has been achieved. This new period has begun due to the current atmosphere of conflict in the Middle East. Reformation seems inevitable in the region, and Turkey and the EU need each other to be effective in the process.

The Kurdish question lies at the heart of the picture. The Kurdish uprising, which was one of the premises of the military tutelage of the past, turned into one of the legitimate sources of civilian politics to the extent that it could be inclined toward peace during AK Party rule. Those aspiring to overthrow the AK Party aimed to obstruct the reconciliation process and cut off relations between the outlawed PKK and the AK Party. During the period when EU-Turkey relations evolved in a positive direction, the possibility of resolving the Kurdish question through political and peaceful methods increased. Contrarily, in the period of divergence from the EU, Turkey's isolation led the PKK to readopt the language of war, which the PKK regarded as rational in the context. The Middle East, and Syria issue in particular, created the exact opposite effect. The developments in the region gradually pacified Turkey, causing the country to lose its influence. Each wrong or incomplete step was manipulated against Turkey by the PKK and other prominent agents in the region. As Turkish territory was targeted by manipulating this vulnerability, the AK Party started to adopt a pro-conflict strategy. So, while reforms were delayed, the psychological gap between it and the EU grew wider.

Maybe out of an instinctive drive, the AK Party has never abandoned its human-centric political approach despite everything. This factor upset this pessimistic balance and set the balances on a positive direction again. Doors were opened to everyone heading from the Middle East. Kurds, Arabs and Arab Christians fleeing Syrian President Bashar Assad's regime, the Democratic Union Party (PYD) and DAESH found a country that gave them a chance to start a new life. Turkey moderated the humanitarian plight to an acceptable level in its territory while the West remained unable to prevent it, or maybe even triggered it to a certain degree.

This principled stance not only contributes to the revival of Turkish-EU relations, but also makes the AK Party focus on reforms again. So, the ways to aid Kurds again and resist the PKK's strategy that normalizes war has opened. The success of this initiation depends on Kurds' positive approach to it. If it succeeds, the primary result will be the PKK's entrapment in Syria and the second one will be Turkey's preparation for a new period as a component of the EU.
Last Update: Jan 13, 2016 1:49 am
RELATED TOPICS