Is Turkey's intervention a call to war? 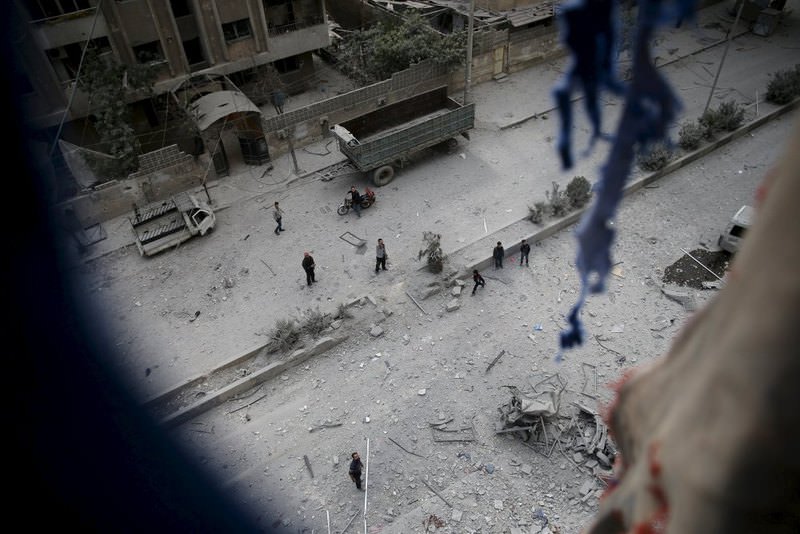 People inspecting the damage at a site hit by Russian-backed pro-Syrian government forces' airstrikes in the moderate held Douma neighborhood of Damascus, Syria.
by Etyen Mahçupyan Feb 16, 2016 12:00 am

In this de facto situation in the region, Turkey's latest move against the PYD in Syria foreshadows a permanent peace and resolution

The Turkish army's shelling of the Democratic Union Party (PYD) positions might have confused some people. After all, it was a completely unexpected situation. Those who are not very familiar with Turkey have two common and contrasting misconceptions about the country. The first misconception assumes that Turkey remains helpless and incompetent concerning foreign policy and consequently cannot take any initiative. The second is the assumption that President Recep Tayyip Erdoğan might favor a war for his personal interests, so Turkey can take on an excessive initiative. Both assumptions are far from the realities in Turkey. Turkey's shelling of PYD positions and the background of the issue requires a different perspective to comprehend.

First of all, Turkey has never taken a serious risk in its actions and is determined to stay away from risks. Throughout Turkey's history, risks of failure have been taken more seriously than possibilities of success, which has turned into a state mentality. Therefore, the country should not be expected to venture into highly risky and unpredictable actions. Erdoğan's composed behavior when Turkey shot down the Russian jet sets a good example of how such tensions are managed. The 2003 parliamentary resolution authorizing military deployment to Iraq must be remembered in this context since the U.S. decided to launch an operation in Iraq at that time. However, the current U.S. position is the exact opposite of its position then. It must be added that the U.S. has directly or indirectly encouraged Turkey to intervene in Syria for years. However, Turkey resisted and demanded an explicit declaration of intent from the U.N. or U.S. But this does not mean that Ankara would consent to anything, and the country will not take a step back on this crucial matter. Russia's opportunism and not recognizing ethical and legal codes legitimizes Turkey's pursuit of its own interests.

Secondly, it is superfluous to discuss whether the shelling of the PYD positions is within the realm of the rules of engagement. The specifics of law aside, those rules are essentially valid between the Turkish and Syrian governments. It may function for the forces that are explicitly siding with the Syrian government, But the PYD is not such a formation as it defines itself as an independent organization. It also follows a strategy undermining Turkey to the extent that it has links with the outlawed PKK. In such a case, discussions regarding the rules of engagement cannot go beyond being a mind exercise for experts on the subject.

Thirdly, it is useful to consider the possibility that the U.S. might be content with the shelling of PYD positions. As many U.S. authorities repeatedly emphasized, the PYD is regarded as a partner. But the same PYD also has an alliance and a more organic relation with Russia, whose future actions are unpredictable. The U.S. also cannot be expected to sustain a long-term or stable partnership with the PYD, which is on a mission to expand its realm of control, forces mass migration and commits crimes against humanity. Consequently, we are confronted with a U.S. that wants to maintain its relations with the PYD while not losing it to Russia and not objecting to it. Turkey's latest move has definitely served this U.S. purpose.

And fourthly, peace and resolution in Syria can only be introduced by bringing the Syrian opposition to the table. As the PYD continues to act aggressively and plans to invade more territory, the opposition will not accept the current de facto situation and peace will not be introduced. For this reason, Turkey's latest intervention was a benign move for those working for a resolution.

Restricting all kinds of aggressors continues to set a minimal prerequisite for peace in Syria. Turkey is throwing its weight around in this direction. Its latest intervention is not an invitation to war, but rather creates a possibility for peace.
RELATED TOPICS